DJ: Hi Ferrett!! Thanks for agreeing to do this interview!

Ferrett: The marketing department always refers to me as a “quirky” author, which means “I write books that don’t fit into easy categories.”  My Flex series was about a magic caused by obsessions, where if you were truly devoted to your cats, you would become a magnificent felimancer – master of cat magic!  Except you wouldn’t want to rule the world, you’d just want to take care of your ever-growing hoard of kittens.

Then I wrote The Sol Majestic, which is a space opera about a restaurant – there are no warships battling, just chefs trying to make soup for the most personal of reasons.

So my books are a little weird.

DJ: What is Automatic Reload about?

Ferrett: It is a cyberpunk romance.  Think about Brad Pitt and Angelina Jolie in Mr. and Mrs. Smith, except they’re both faster-than-human killing machines with PTSD and panic disorder, falling in love while they murder people.

DJ: What were some of your influences for Automatic Reload?

Ferrett: They say that all books are a conversation with each other.  In this case, Automatic Reload is very specifically a word I’m having with K. C. Alexander.

See, I read K. C. Alexander’s cyberpunk novel Necrotech, and in it they had a marvelously violent female cyborg who exuded a steady stream of don’t-give-a-fucks.  And because K. C.’s prose is so sharp and evocative, I kept watching their heroine Riko and her artificial limb wake up in garbage-smeared alleyways and lice-filled jailbeds and all manner of disgusting places…

And while I loved following Riko around, I kept asking one question:

When does she field-strip and clean that damn thing?

I mean, Riko kept landing in slimy, gunky situations and her artificial limb never seized up.  And while I was waiting for the scene where Riko had to spend the day oiling and tightening her neglected limb, I started imagining my own “maintenancepunk” novel where I had a guy who did some serious tuning.

So not only is Automatic Reload about cybernetic action, it’s about a realistic cybernetic firefight where you have to worry about degrading weapons loadouts and proper configuration files.   END_OF_DOCUMENT_TOKEN_TO_BE_REPLACED 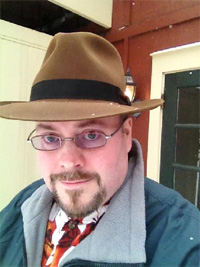 Today I am interviewing Ferrett Steinmetz, author of the new urban fantasy novel, The Flux.

DJ: Hey Ferret! Thanks for stopping by to do this interview!

Could you start things off by telling readers a little bit about The Flux?

Ferrett Steinmetz:  It’s the story of a man who loves paperwork, raising a daughter who loves videogames.

What if I told you the man loves paperwork so much that he has come to work great acts of magic through filling out ordinary forms, and can conjure apartments out of nowhere simply by imagining that he’s completed all the leasing agreements?

What if I told you that the daughter was burned by a magical terrorist, and as a result had been accelerated into horrible powers that no eight-year-old should have?  And her love of videogames also kindled magic, and now she can create vortexes of mass destruction simply by writing “Black Hole” in a game of Scribblenauts? END_OF_DOCUMENT_TOKEN_TO_BE_REPLACED