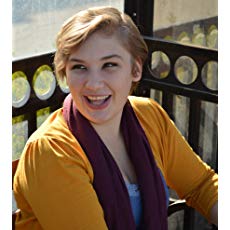 Today I am interviewing Elle Katharine White, author of the new fantasy novel, Flamebringer, final book in the Heartstone series.

DJ: Hi Elle! Thanks for agreeing to do this interview! For readers who aren’t familiar with you, could you tell us a little about yourself?

Elle Katharine White: Hey there! Thanks so much for having me here. I’m Elle, I write sci-fi and fantasy books and love all things nerdy, especially things with dragons.

DJ: What is Flamebringer and then the Heartstone series about? 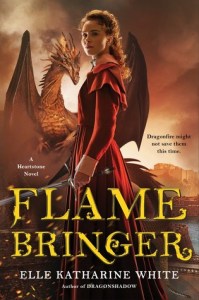 Elle: Flamebringer is the final book in the Heartstone trilogy, which started as a reimagining of Jane Austen’s Pride & Prejudice in a fantasy world with dragons and dragon-riding monster hunters. I’d always wondered what life looked like for Elizabeth and Darcy after their happily ever after, and if they had to work as hard to keep their HEA as they did to find it in the first place. For the characters in Flamebringer, the answer to that question is a resounding yes. Unfortunately for them, they have the added pressure of saving their kingdom from a monstrous invasion, which will make for some very interesting marriage therapy sessions later in life.

DJ: What were some of your influences for the Heartstone series?

Elle: The first book began with a mash-up of Pride & Prejudice and the movie How to Train Your Dragon, but in the second and third books I wanted to expand the world of Arle, giving it depth and history beyond its Regency counterpart. For that I turned to mythology. (I was and still am a huge myth nerd.) Many of the non-human characters were inspired by creatures I’d met in folklore. END_OF_DOCUMENT_TOKEN_TO_BE_REPLACED