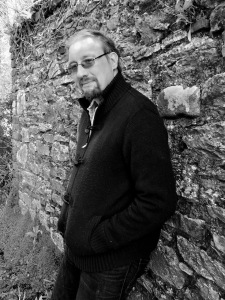 Today I am interviewing Gareth Hanrahan, author of the new fantasy novel, The Gutter Prayer, first book in the The Black Iron Legacy series.

DJ: Hi Gareth! Thanks for agreeing to do this interview!

Fortunately, I like monsters and sinister plots. Heroes… are crunchy and taste good with ketchup.

I’m based in Ireland. Bearded. Early 40s. Two or three children, depending on when this interview gets posted.

DJ: What is The Gutter Prayer about?

Gareth: Three thieves in a fantastical city are betrayed by the master of the thieves’ guild. One’s caught and imprisoned, one escaped, and the third is ransomed by an eccentric history professor after she starts to have bizarre magical visions. The three thieves reunite and plot to use this new power to get revenge on their former master. What they don’t realise is that this strange gift has deep and terrible connections to the secret history of the city, and they’re not the only people who seek to use this gift.

DJ: What were some of your influences for The Gutter Prayer and the series?

Gareth: It’s sort of a conceptual stew – there’s lots and lots of stuff in there. Worrying about climate change and just-in-time delivery while wandering around a grocery store. Tim Powers novels, especially DECLARE. Dungeons and Dragons monsters. Thinking about what the Crimean War – and the 19th century in general – might have looked like with magic alchemy. Some old BBC Series like the original House of Cards and Seven Wonders of the Victorian Age. Time misspent on World of Warcraft. Robert Holdstock’s Lavondyss. END_OF_DOCUMENT_TOKEN_TO_BE_REPLACED