DJ: Hey Hilary! Thanks for agreeing to do this interview!

Hilary Monahan: Why sure. I’m a New York Times bestselling author for my horror YA MARY: THE SUMMONING duology which is out with Disney Hyperion. I’m also Eva Darrows, and I wrote THE AWESOME for Rebellion to some critical acclaim and have DEAD LITTLE MEAN GIRL coming out with Harlequin Teen in March. I do romance, too, under a third name—Thea De Salle—and those books will be out with Simon and Schuster starting in February. Basically if it involves words, I probably write it.

DJ: What is Snake Eyes about? 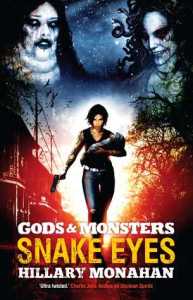 Hilary: Women. It’s a love letter to women. Queer women and old women and strong women and fat women and thin women and any kind of woman you can think of. Also snakes. I’m terrified of snakes and what better way to wrestle that demon than to write an entire novel about them. It didn’t work, by the way–I’m still afraid of them–but at least I got a very cool Greek mythology UF out of the deal.

DJ: What were some of your influences for Snake Eyes?

Hilary: Mad Max: Fury Road for sure. I loved how the film featured female characters who are often reduced to supporting cast for male centered stories. Also that absolutely atrocious Clash of the Titans movie—the 1981 version (so the less atrocious of the two, sorry Hollywood.) For reasons I do not know, my grade school insisted on showing us that film annually. The artful Claymation of Medusa stuck with me, I guess.   END_OF_DOCUMENT_TOKEN_TO_BE_REPLACED