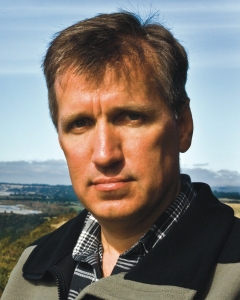 Today I am interviewing James Rollin, author of the new thriller novel, Crucible, fourteenth book in the Sigma Force series.

DJ: Hi James! Thanks for agreeing to do this interview!

James Rollins: What many readers might not know about me is that I can still neuter a cat in under thirty seconds.  While my full-time job nowadays is writer, before that I was a veterinarian. I always resent when I’m introduced as “former veterinarian,” as I still do some volunteer work as local shelters helping with spaying and neutering.  Beyond this hobby of removing genitalia, I also enjoy a pursuit that started back in my college years, namely caving. So besides hiding behind a surgical mask, you can often find me far underground, sometimes stuck in a tunnel that was narrower than I thought.

DJ: What is Crucible and then the Sigma Force series about?

James: Sigma Force is a team of former special forces soldiers who have been drummed out of the service for various reasons. But because of special aptitudes and abilities, they’ve been recruited in secret by DARPA—the Defense Department’s research-and-development agency—and retrained in various scientific disciplines to act as field agents for DARPA. Their mission is to protect the globe against various emerging threats. Basically, they’re scientists with guns.

In Crucible, the team is faced by one of their most daunting—yet personal—adventures of the entire series. On Christmas Eve, a pair of Sigma Force teammates arrive home after a night of carousing to find their home ransacked and their respective lovers kidnapped, along with the two young daughters of one of the men. This attack is connected to a real-world threat, one that Stephen Hawking once described as the “worst event in the history of civilization.” That Elon Musk fears will lead to World War III. Even Russian president Vladimir Putin has said that whoever controls this event will control the world. That event is the creation of the first human-like artificial intelligence. END_OF_DOCUMENT_TOKEN_TO_BE_REPLACED