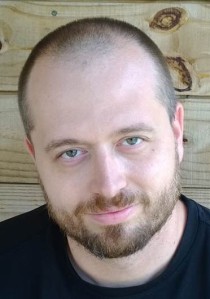 Today I am interviewing J.T. Nicholas, author of the new sci-fi novel, SINdicate, second book in The New Lyon’s sequence.

DJ: Hi J.T. ! Thanks for agreeing to do this interview!

J.T. Nicholas: Hi, there. Thanks for having me. I never know what to tell people in the “tell me about yourself” section, but here goes. I’m an Army brat (child of a career military family) which means I moved around a lot as a kid and got a bit of a taste for the nomadic lifestyle (I’ve moved, at last count, something like 30+ times in my life). That’s great if you want to be an author, because you get to see lots of different slices of the world, and see how different, and how the same, people are wherever you go. I spent most of my professional life before making the jump to being an author in data analytics, which is exactly as exciting as it sounds. But I’ve always wanted to be an author and as far back as I can remember, have been writing stories of one kind or another. Gotta be honest, it took a long time to get here, and I’m not quite sure I believe it yet. 😊

DJ: What is SINdicate and then The New Lyon’s sequence about?

J.T.: I like to think of the entire series as telling two stories. The first is a pretty classic detective whodunnit, but set in a dystopian, cyber-punkish future. The hero, Jason Campbell, is a Detective who is trying to solve a series of serial murders. Only, the victims aren’t human, at least in the law’s eyes, and that’s really what the second story is about. What it means to be human and the complacency that we allow to creep into place that keeps us from standing up against things we know are wrong. And what we can do about it. It’s about murder and investigation and revolution and genocide, too. So, you know… the usual.

DJ: What were some of your influences for The New Lyon’s sequence?

J.T.: A lot of the sci-fi I read as a kid. Isaac Asimov’s Foundation series. A ton of Phillip K. Dick’s work, with obvious homage to Do Androids Dream of Electric Sheep. L.E. Modesitt Jr.’s work. William Gibson. Neal Stephenson. The list is pretty endless. END_OF_DOCUMENT_TOKEN_TO_BE_REPLACED