Today I am interviewing Scott Coon, an accomplished short story writer and author of the new science-fiction novel, Lost Helix.

DJ: Hi Scott! Thanks for agreeing to do this interview!

Scott Coon: Hello, DJ. Thank you for having me. Though Lost Helix is my first published novel, I have had several short stories published. Bewildering Stories recently featured “The Loneliest Advertisement Bot” and have published a few other stories over the years. My work is often influenced by my career as a computer programmer and also by my six years as intelligence analyst in the U.S. Army. Both played a role in Lost Helix.

DJ: What is Lost Helix about? 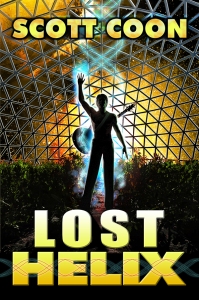 Scott: Growing up in a space station, DJ dreams of writing music but he can’t make a living on it, not in the Stone River Asteroid Belt. Thanks to company’s never-ending contracts and impossible to afford transit, leaving isn’t an option. DJ expects to end up working for Black Mountain, just like his dad and everyone else. When his father goes missing, DJ finds an encrypted file and other evidence that his dad was a hacker in the company’s secret war of industrial sabotage, sometimes claiming lives to knock competitors off the most valuable asteroids. To recover the evidence, the company sends a lifelong family friend, Agent Coreman. DJ is forced to make a run for it, hoping to find justice and maybe his dad.

DJ: What were some of your influences for Lost Helix?

Scott: My ideas often come from asking the question, “Yeah, but what next?”  Terraforming is a recurring concept in science fiction, like in James S. A. Corey’s Leviathan Wakes, but what happens when the planet is done? How does humanity go about populating it? The world of Lost Helix is my answer to that question. Another source of inspiration was the video game Sid Meier’s Civilization. Every time I built the domed spaceship bound for Alpha Centauri, I wondered what would become of it after the colonists stripped it for parts and left its remains in orbit. In Lost Helix, I give my science victory colony ships a second life as a farm, feeding the miners of Stone River. END_OF_DOCUMENT_TOKEN_TO_BE_REPLACED