DJ: Hey C.T.! Thanks for agreeing to do this interview!

C.T. Phipps: Hexa, I’m a life-long geek who managed to luck out into being an author by trying for about six years. I didn’t know if anyone would ever want to read my stuff so I just wrote what I wanted to read and that resulted in some modest success with my work. That led to other people checking out my work and meeting with my current publishers.

DJ: What is Lucifer’s Star about?

C.T.: A lot of Star Wars fans (okay, maybe just me) always wondered what happened to all of those TIE pilots and stormtroopers after the Battle of Endor. The Ewoks couldn’t have eaten all of them, right? So, I starting thinking a lot about the morality and world-building which went into what a “real” morally ambiguous between a ruthless dictatorship and their rebels would like as well as the aftereffects.

In this case, its personified by Colonel Cassius Mass who was a soldier of the Archduchy of Crius who found out, holy crap, we were the bad guys?, only after losing everything. It follows him as he tries to disappear into a normal life only to get dragged out of it by the side which defeated his and that wants him to prevent another war. It’s a dark space opera with heavy focus on characterization and questions of what to do when no side is right.  END_OF_DOCUMENT_TOKEN_TO_BE_REPLACED 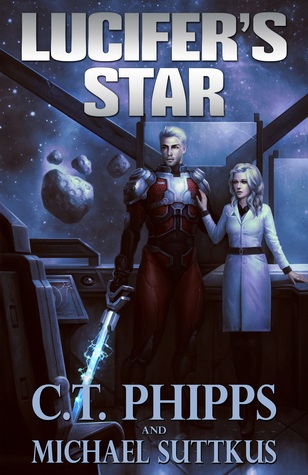 From the bestselling author of The Rules of Supervillainy:

Cassius Mass was the greatest star pilot of the Crius Archduchy. He fought fiercely for his cause, only to watch his nation fall to the Interstellar Commonwealth. It was only after that he realized the side he’d been fighting for was the wrong one. Now a semi-functional navigator on an interstellar freight hauler, he tries to hide who he was and escape his past. Unfortunately, some things refuse to stay buried and he ends up conscripted by the very people who destroyed his homeland.

LUCIFER’S STAR is the first novel of the Lucifer’s Star series, a dark science fiction space opera set in a world of aliens, war, politics, and slavery.

The sight of the burning starships around me was like a galaxy of new stars lighting up the emptiness of space. Their fuel and energy cells burned without oxygen long after the crews had suffocated in the vacuum of space. Hundreds of dreadnoughts, battleships, carriers, and starfighters exchanged fire in the largest battle of the war.

The Revengeance was taking point in the assault on the enemy flagship Earth’s Successor. We had managed to take out its support craft and casualty ratings were still well within acceptable parameters. Acceptable as long as I didn’t think of Black Squadron-3 as Daniel, Skull Squadron-6 as Rebecca, or Dagger-Squadron-7 as Lisa. They were men and women I’d trained with and called friends, now just particles and gas.

“Focus,” I commanded myself, then spoke into my helmet’s comm. I was sitting in the middle of my tight Engel-fighter cockpit moving at speeds which boggled the mind. While space was largely empty, the tightness of the battle formations meant I needed to fly like I’d never flown before. The slightest misstep would mean not only my death but my entire squadron’s destruction. “Dagger Leader, I need you to bring up your teammates to thin out the ranks of those Crosshairs.”

“Yes, your Excellency,” Dagger Leader, a woman named Arianna Stonebridge, said, referring to me by my noble title rather than rank.