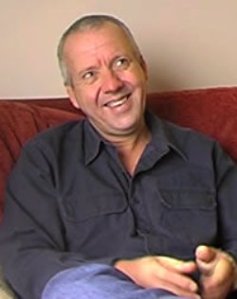 DJ: Hey Neal! Thanks for agreeing to do this interview!

Neal Asher: My pleasure DJ. About myself? I’m a 56-year-old SF writer who came up the hard way. I wrote while working in all sorts of jobs – engineering, building, all sorts, I even delivered coal once – didn’t get published for a while, then got the odd short story published, then a novella, a collection, another novella (all for buggerall money) until finally I was taken on by Macmillan in 1999. Since then my total of published books is about 23. I divide my time between Essex in the UK and the island of Crete. I’m a practical man and not one of those effete writers who delights in being unable to work with his hands. Having recently gone through a bit of a hiatus (I lost my wife) I’m back at the keyboard. I’m hoping to at least get above 50 books before they nail me in a coffin.

DJ: What is Infinity Engine and then the Transformation trilogy about?

Neal: Transformation … but I guess you want me to elaborate. The story concerns a blacklisted artificial intelligence called Penny Royal who went rogue after exterminating 8,000 human troops on its own side. It concerns this AI’s apparent search for redemption, the revenge motives of a resurrected human soldier who is pursuing it, and the search for explanations by those who were transformed by it.

DJ: What were some of your influences for the Transformation trilogy?

Neal: My previous books, the thousands of SF books I’ve read, the films I’ve seen, the science I read…

Neal: Thorvald Spear is one of the 8,000 soldiers Penny Royal killed. He has been resurrected from a recording of his mind that turned up 100 years after the prador-human war during which this atrocity was committed. His immediate motive is revenge, but while he pursues Penny Royal he learns that the AI may have tampered with his mind – that he is acting in accordance with its wishes. Riss is an assassin drone – a killing machine made in the shape of a prador parasite whose sum purpose was to inject real parasite eggs inside prador to spread death and terror. Disenfranchised by the end of the war she searches for purpose and is … damaged by Penny Royal. She joins Spear in his quest. Sverl is a prador – one of the hostile crab-like aliens who went to war against the human Polity – having fled into exile after a new king of the prador made a truce with the humans, he does not understand how weak humans and detestable AIs nearly destroyed the prador kingdom. He again was once seeking answers and encountered Penny Royal. The answer the AI gave was his grotesque transformation into a tri-part being of prador, human and AI. He still wants answers… END_OF_DOCUMENT_TOKEN_TO_BE_REPLACED