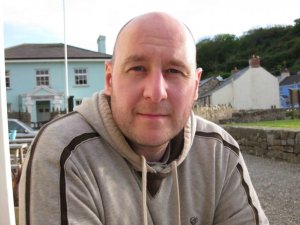 Today I am interviewing R.S. Ford, otherwise known as Richard Ford, author of the new fantasy novel, A Demon in Silver, first book in the War of the Archons series.

DJ: Hi R.S.! Thanks for agreeing to do this interview!

R.S. Ford: I’m the author of five published novels, including the steampunk adventure Kultus, published by Solaris, and the epic fantasy trilogy Steelhaven from Headline (both published under the name Richard Ford). I’ve also written a few short stories for the Black Library and I’m currently one of the writers on the Elite: Dangerous computer game. Other than all that, just an ordinary bloke

DJ: What is A Demon in Silver about? 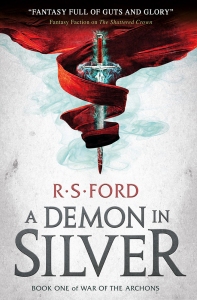 R.S.: In a nutshell, it follows a young woman called Livia Harrow, who lives in a land where magic disappeared a hundred years earlier. When Livia begin to manifest strange powers that haven’t been seen for a century all kinds of nefarious characters decide they want a piece of the action. Blood, guts and adventure ensue!

DJ: What were some of your influences A Demon in Silver and the series?

R.S.: The original seed came from wanting to start at ground zero – to have a society that was bereft of magic and whose only knowledge of it was in dusty tomes – then see how the story would develop when sorcery returned. How would those in power view it? With reverence or fear? How would someone who was previously powerless react to being able to wield magic in a place where it didn’t exist? END_OF_DOCUMENT_TOKEN_TO_BE_REPLACED