Tag Archives: The fairies of sadieville 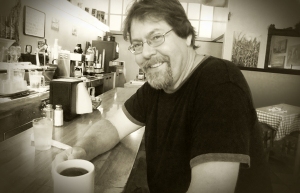 Today I am interviewing Alex Bledsoe, author of the new fantasy novel, The Fairies of Sadieville, final book in the Tufa series.

DJ: Hi Alex! Thanks for agreeing to do this interview!

Alex Bledsoe: I’m originally from Tennessee, and eight of my thirteen novels are set there. I started writing as a journalist, and published over fifty short stories in various small press magazines and journals before my first novel, The Sword-Edged Blonde, came out in 2007. I’m married with three kids, and now live in a Wisconsin village famous for having wooden troll statues scattered around town.

DJ: What is The Fairies of Sadieville and then the Tufa series about?

Alex: The series is about a race of exiled faery folk who live in Appalachia. For the most part they’re indistinguishable from human beings and only show their magic in their music.

The Fairies of Sadieville begins with the discovery of a silent film from 1915 that shows a Tufa girl dropping her glamour and revealing her true faery nature. Through this, the vanished coal town of Sadieville is rediscovered, and with it a possible way for the Tufa to return to their homes in Faeryland…if the queen who exiled them will allow it.

DJ: What were some of your influences for the Tufa series?

Alex: A whole bunch of disparate and random things mentally clicked together to create the Tufa. Growing up in Tennessee, I heard many stories about the people of the mountains, including groups steeped in mystery and danger. Then, in the late 90s, I attended my first National Storytelling Festival in Jonesborough, TN, which is the ancestral home of my dad’s family in Appalachia. The idea of writing about that area really grabbed hold of me then, but it took a long time to sort out exactly what I wanted to do with it. Immersing myself in the music of the region, both classic and current, really helped, and music became one of the foundations of the Tufa. END_OF_DOCUMENT_TOKEN_TO_BE_REPLACED