Today I am interviewing Deborah A. Wolf, author of the new fantasy novel, The Forbidden City, second book in The Dragon’s Legacy series.

DJ: Hi Deborah! Thanks for agreeing to do this interview!

Deborah A. Wolf: My pleasure! Thanks for having me back.

DJ: What is The Forbidden City and then The Dragon’s Legacy series about? 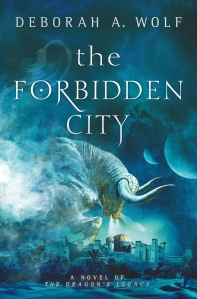 Deborah: It’s about young people coming of age and having to correct the mistakes of their elders, while fucking the world up anew. It’s about friendship and love in the face of disaster. It’s about power imbalance and abuse, the absolute absurdity of war, gender norms… and, most especially, it’s about dragons.

DJ: What were some of your influences for the The Dragon’s Legacy series?

Deborah: Growing up in a mostly Athabascan village in the middle of Alaska, immersion in the Arabic language and cultures, and a passion for Tolkien make for a very potent brew. Also, George R. R. Martin basically gave me permission to really fuck my characters up, so blame him.

Deborah: I love all my characters. Each of them is imperfect, and flailing through life as best they can. Sometimes they fuck up, and those fuckups can have terrible, irreparable consequences, but they keep trying. Jian, for instance, lives in a slave empire and is constrained by his half-dae heritage to become a member of Sindan’s elite military force, but he tries to create a small bubble of safety and normalcy for those he loves. Sulema is dragged into politics when all she wants to do is ride her horse and be a warrior for her people, but she tries her best to live up to her new responsibilities. And Hafsa Azeina really is trying to kill fewer people. END_OF_DOCUMENT_TOKEN_TO_BE_REPLACED