Today I am interviewing B.K. Bass, author of the new fantasy novella, Warriors of Understone.

DJ: Hi B.K.! Thanks for agreeing to do this interview!

B.K. Bass: Sure thing, and thank you for having me! I’m an author of science fiction, fantasy, and horror. So far I’ve published five novellas and an anthology including four books in a dark fantasy series called The Ravencrest Chronicles; Night Shift, the first book in a cyberpunk trilogy called The Night Trilogy, and most recently Warriors of Understone, the first book in The Tales of Durgan Stoutheart. I’m also one of the owners and the Acquisitions Director for Kyanite Publishing, and the Editor-in-Chief of the Kyanite Press journal of speculative fiction.

DJ: What is Warriors of Understone about? 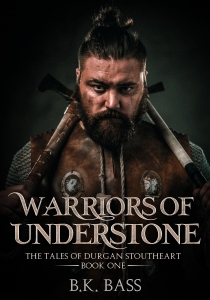 B.K.: Warriors of Understone is the story of a dwarven craftsman named Durgan who is trapped in his role by the confines of a strict caste-based society. When he is given an opportunity to change his station in life, he must fight not only to become a warrior but to overcome social prejudices. He finds himself in the middle of a political battle between two rival factions, tormented by his new peers, and dismissed by the daughter of his thane – who he finds himself attracted to. He struggles to prove himself, and in the process works to prove that every dwarf should be judged by the merit of his worth rather than the circumstance of his birth.

DJ: What were some of your influences for Warriors of Understone?

B.K.: Definitely every fantasy story with a dwarf, from Tolkien to modern tales like the Dragon Age games – which were a huge inspiration on their own. Dwarves in fantasy almost invariably are relegated to the role of side characters, or at best mixed evenly into the bigger picture. It’s very rare to see a story that features them, so I wanted to write a book where there were only dwarves, and this is it! There’s mention of humans and elves and goblins, so the wider world has more to offer, but in this book we get to take a deep dive into dwarven culture and politics. END_OF_DOCUMENT_TOKEN_TO_BE_REPLACED

Today I am interviewing Don Lubov, author of the new science-fiction novel, The Plague.

DJ: Hi Don! Thanks for agreeing to do this interview!

What is The Plague about?

Don: “The Plague” is a cautionary tale, about how anger can be dangerous to us all.

DJ: What were some of your influences for The Plague?

Don: Seeing anger on an individual destroy its container, and on a large scale, destroy countries. As Mark Twain said: “Anger is an acid that can do more harm to the vessel in which it is stored than to anything on which it is poured.”

Don: My main character, Dave Miller, is an investigative reporter. He is obsessed with his attire, frightened of heights, claustrophobic, and insecure in his ability to excel as a reporter.

Don: On page 37, an overdressed shopper argues with a “servicebot”. END_OF_DOCUMENT_TOKEN_TO_BE_REPLACED