DJ: Hey Thomas! Thanks for agreeing to do this interview!

Thomas Heasman-Hunt: No problem. I’m a 31-year-old part-time author (in other words, like most writers, I have a day job…) living in Cambridgeshire in the UK. I’ve been writing, telling stories, playing make-believe and so forth for as long as I can remember, but I started doing it in earnest and trying to make a career out of it perhaps seven or eight years ago. I first tried writing a novel, which was a long slog to get finished and, once it was done, failed to win over any agents or publishers. I’m quite grateful for that now because it was very much a ‘first novel’ and had no business seeing the light of day! But it kind of got it out of my system and I started to try my hand at short fiction instead. I put it all on a blog (theserialwritist.wordpress.com), just so I could amass a portfolio of work, and it ended up being a multi-year odyssey of fiction writing that birthed dozens of short stories, novellas and a handful of full novels, totaling over a million words altogether. Legacy was one of those novels (well, actually, six short stories that have been edited and combined into one work). I’m very glad that, out of everything I’ve done, that’s the one I’ve managed to get to a wider audience.

DJ: What is Legacy about? 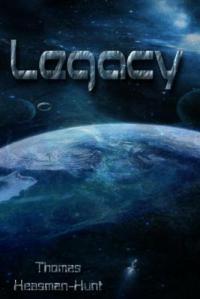 Thomas: It’s pure space opera – a fun, free-wheeling adventure across interstellar space that gradually raises the stakes until the future of the entire galaxy hangs in the balance. The hero, Emily Ajax, is the daughter of a legendary starship captain and has spent her whole life living in his shadow. When he dies unexpectedly, she’s left trying to figure out some interstellar legalese regarding ownership of a remote moon base that her father’s former executive officer is strangely intent on keeping from her. What starts as a bunch of rich kids going off on a jaunt across space ends up uncovering a galactic conspiracy that the late Captain Ajax was at the very heart of. Emily has to grapple with uncomfortable truths about her father and the stories she’s grown up hearing about him, as well as try to stop a tyrant who’s all-too-familiar to her while commanding The Sunskimmer, her father’s old ship. At the same time, her friends and crew must grow into their new lives as outlaws, and a bounty hunter with a dark secret and a very strange connection to Emily comes aboard. END_OF_DOCUMENT_TOKEN_TO_BE_REPLACED