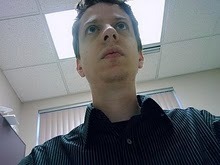 Today I am interviewing Tim Akers, author of the new fantasy novel, The Iron Hound, second book in The Hallowed Wars series.

DJ: Hey Tim! Thanks for agreeing to do this interviews! ☺

Tim Akers: I’m excited to be here! First off, I grew up in the mountainous bits of North Carolina, but moved to Chicago for college back in the 90s. My first professional writing credits were for various role playing games while I was still in college, but after graduation I focused on paying bills and having food to eat, so didn’t get much writing done for a while. I turned that around in my early thirties, started writing short stories, and eventually found my way into novels. I’ve been at this professionally for almost fifteen years now, and The Iron Hound will be my fifth published novel.

DJ: What is The Iron Hound and also The Hallowed Wars series about?

Tim: The overall series is about a conflict between two countries and two religions, focusing on the lives a handful of people most affected by the schism. The series follows Malcolm Blakley, a duke of the north, and his son Ian, as they try to unravel an ancient conspiracy aimed at destroying both their country and the church. The story is also told from the perspectives of an inquisitor of the church, Frair Lucas, and his ass-kicking companion, the paladin Elsa LaFey. The final character is Gwendolyn Adair, whose family has been hiding a generations long heresy from the church. Her story is the focus of book one, so I won’t say much to spoil it. Suffice to say, her already complicated life gets much more interesting in book two.

Like all second books, The Iron Hound picks up on the tensions introduced in the first novel in the series (The Pagan Night) and escalates them toward the final conflict, which will occupy the final installment, The Winter Vow, due next summer. END_OF_DOCUMENT_TOKEN_TO_BE_REPLACED