Today I am interviewing James Gunn, author of the new urban fantasy novel, Transformation, final book in the Transcendental trilogy.

What were some of your influences for the Transcendental trilogy?

James Gunn: I am an emeritus professor of English at the University of Kansas, after holding several other positions at the University, including director of University Relations during the turbulent 1960s (which inspired my novel Kampus).  I started writing science fiction in 1948 and had my first stories published in I949, which makes me (barely) at 94 in a month, the oldest living Golden Age writer.  Throughout my academic career I continued to write, publishing more than 100 short stories and 45 books, a good number of them non-fiction books about science fiction, including Alternate Worlds: The Illustrated History of Science Fiction, the six-volume anthology The Road to Science Fiction, Isaac Asimov: The Foundations of Science Fiction, The Science of Science-Fiction Writing, Inside Science Fiction, and others.  My novels include The Immortals (which became a TV movie and series as “The Immortal,”) The Joy Makers, The Listeners, The Millennium Blues, and some dozen or so others.  My most recent publications are the Transcendental trilogy and a series of stories that I call “Tales from the Transcendental” being published in Asimov’s Science Fiction. 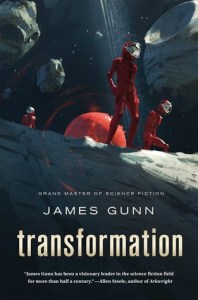 James: The main characters in the Transcendental trilogy are Riley, a battered and despondent former navigator and gunner in the human/Federation war and now a disillusioned emissary of an unknown master with an impossible directive; and Asha, a woman of mystery with unusual abilities and self-control.  I’ve always preferred flawed characters, not heroes, and the challenge is to see if they can surpass their limitations when the need arises.

DJ: What is the world and setting of the Transcendental trilogy like?

James: This is the future 1,000 years from now when humanity sends out its first interstellar generation ships and finds that the galaxy is already owned by a varied group of alien species who have organized themselves, millennia before, into a Federation, ostensibly benign but fiercely defensive about threats to its sovereignity and rigorous about potential new members.  It results in a ten-year war that has just fought itself, after great destruction, into a treaty, and the Federation, which values stability and stasis above all else, has been threatened by rumors of a new religion called Transcendentalism based around a machine, somewhere in the galaxy, that has the potential to bring transcendence to any creature.  And that threatens the stability and future of the Federation.  Hidden forces have dispatched Riley and possibly other emissaries to a spaceship of pilgrims composed of many species seeking the Transcendental Machine to seize it for their own use or destroy it and the unknown Prophet who has announced the new religion. END_OF_DOCUMENT_TOKEN_TO_BE_REPLACED