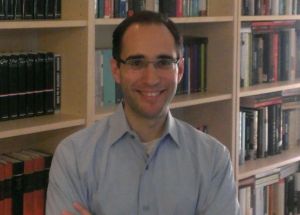 Today I am interviewing Alvaro Zinos-Amaro, author of the new non-fiction book, Traveler of Worlds: Conversations with Robert Silverberg.

Traveler of Worlds is a book of conversations in which Alvaro asks Robert Silverberg all sorts of questions about his life experiences, love of travel and art and music, and of course his long and prolific career, in and out of science fiction.

DJ: Hey Alvaro! Thanks for stopping by to do this interview!

Alvaro Zinos-Amaro: Thanks for having me! I’m a science fiction and horror writer. I also write nonfiction about science fiction, fantasy and horror, and like to study the history of the fields.

I was born in Madrid, Spain, went to high school in Munich, Germany, and then returned to Madrid for a BS in Theoretical Physics. I’m sure this diverse background contributed to my interest in a type of fiction that specializes in what-ifs, in the creation of alternative worlds and cultures.

DJ: What is Traveler of Worlds: Conversations with Robert Silverberg about?

AZA: As mentioned in your introduction, the book is a series of candid, relaxed conversations with Robert Silverberg. Some of the topics we discuss: Silverberg’s extensive travel and anecdotes pertaining to such, collecting artifacts, art theory and art history, painting, classical music, film, all manner of writers, Silverberg’s personal habits, his views on society and science, political positions, his youth and early pets, the “sense of wonder,” existentialism, thoughts on his long career and the meaning of awards,

his library, and the process of getting old. As I was working on the book I also solicited questions from readers and fans via Facebook, and integrated these into our conversations.

DJ: I’m going to ask the obvious question: why Robert Silverberg? Of all the sci-fi authors, what was it about him that made you want to undertake this project?

AZA: When I was seventeen years old, back in that distant year of 1996, I discovered Robert Silverberg’s work with Nightwings. The subtle melancholy of its three lyrical novellas moved me deeply and I hunted down as many books by him as I could find. Over the next two years I read fifty of his novels and non-fiction books on history and archaeology. I was bowled over by the vast range of his work, and how inhumanly prolific he was. I heard about a mysterious breakdown through overwork in the 1960s, a perplexing mid-career retirement in the ’70s, and other unusual developments that added to my fascination. And he had an uncommon persona, cool and phlegmatic, that further contributed to the intrigue.

After years of correspondence, the blooming of a friendship, and our collaboration on a fiction project, When the Blue Shift Comes, in 2012, I thought it would be enjoyable and enlightening to converse with him about a long life well spent, and record his thoughts on various subjects.

I hope that fans of his work, as well as more casual readers who wish to know about the writing life and the history of science fiction, will find the result of interest.

DJ: Why did you want to write this type of book?

AZA: I’ve always been fascinated by writers and the writing process. In addition, in the case of Bob Silverberg, I was struck by a growing number of questions. How could one person have written so much, and at such a high level? His characters seemed to express every possible view and opinion—what did he think, and why? Where had his travels taken him? What kind of music and films did he enjoy? What were his eccentricities and foibles and hobbies? Above all, wherefrom sprang the creative well that had thrust up so many works of visionary wonder?

Traveler of Worlds is my attempt to peel back the layers and connect with Silverberg the man and artist, documenting my journey of discovery along the way.

DJ: Believe it or not, I have never read anything by Robert Silverberg! What are some of your favorite novels by him?

AZA: My friend, you’re in for a treat! You can’t go wrong the following novels: Dying Inside, The Book of Skulls, The World Inside, Son of Man, Tower of Glass, Nightwings and Downward to the Earth. These are all from the late 60s and 70s; intense, and stylistically admirable. If you’re looking for something adventure-oriented, with wonderful attention to setting, and more epic in scope, Lord Valentine’s Castle is a joy to read. From the more recent novels, two of my favorites are The Face of the Waters, for its ending, and The Alien Years, because of the generational, multi-perspective approach to its narrative, and the inscrutability of the aliens’ motives.

DJ: Silverberg has quite an extensive collection of short-stories, but could you name some of your favorite from them too?

AZA: This is tricky. Silverberg has published over a thousand stories, and over the last decade or so his most important science fiction stories have been collected in a staggering nine volumes by Subterranean Press. Out of all these hundreds, here’s a baker’s dozen that I consider top-of-the-line: “To See the Invisible Man,” “Flies,” “Passengers,” “The Science Fiction Hall of Fame,” “Sundance,” “Capricorn Games,” “Born with the Dead,” “The Pope of the Chimps,” “Sailing to Byzantium,” “Multiples,” “Homefaring,” “The Feast of St. Dionysus,” and “Thebes of the Hundred Gates.” Some of these are available in the excellent career retrospective The Best of Robert Silverberg: Stories of Six Decades.

DJ: What were a couple of the greatest things (surprises) you learnt about Robert Silverberg while writing the book?

AZA: People tend to think of Silverberg as an unflappable, aloof guy with a sardonic sense of humor and highbrow interests. Fair enough; but there’s also a mischievous twinkle in the eye and a playful nature behind that persona, as evidenced by some of the anecdotes he shared.

I was surprised about some of Silverberg’s childhood experiences. For instance, he was actually extroverted at the age of six or seven, and then became shy later on, as a result of his extroversion getting him in trouble with classmates. I didn’t know much about Silverberg’s relationship with his parents and that was also fascinating.

DJ: How was the overall experience of putting this book together?

AZA: The conversations that make up the text of Traveler of Worlds happened over the course of 2015 in Silverberg’s living room. My girlfriend, Rebecca, and I drove up to visit Bob and his wife Karen Haber four times, and that provided ample time for the conversations to unfold. I then transcribed and edited them, with Silverberg’s approval, for the book. Gardner Dozois wrote an Introduction and Karen an Afterword. I was lucky enough to get some great blurbs from Nancy Kress, Mike Resnick, Kim Stanley Robinson, Sheila Williams and Jack Skillingstead. It was a delightful experience, all around.

DJ: What was your favorite part about writing Traveler of Worlds: Conversations with Robert Silverberg?

AZA: Planning the questions I was going to ask Bob was a blast, because I could roam far and wide in my research on fun subjects. The challenge of adhering to my set questions, while letting the conversations take their own natural course and satisfying my curiosity in the moment, was also stimulating. Bob was pleased with the outcome when he read the final manuscript, and that pleased me. Finally, having produced a book that I myself would have snapped up, had it been written by someone else, is also rewarding.

AZA: They may meet a Robert Silverberg who doesn’t match their expectations; or they may confirm their initial impressions but glean further insights. Either way, I would be pleased if readers felt like they got a better sense of who Robert Silverberg is, and the way his mind works.

DJ: What was your goal in writing the Traveler of Worlds: Conversations with Robert Silverberg? Is there a particular message or meaning you are hoping to get across to readers?

AZA: I hope the book’s informal approach will entertain readers, providing an interesting glimpse into an unusual life and career. Silverberg has gone on record saying he will not write an autobiography, so this may be the closest thing we get. Not everything Silverberg and I talk about will interest everyone, but hopefully something will be of interest to just about everyone who is curious about science fiction and writing. And maybe some folks will find themselves creatively inspired, or will want to learn more about some of the many writers, artists, etc. we talk about.

DJ: When I read, I love to collect quotes – whether it be because they’re funny, foodie, or have a personal meaning to me. Do you have any favorite quotes from Traveler of Worlds: Conversations with Robert Silverberg that you can share with us?

AZA: Here are four of my favorites:

DJ: Now that Traveler of Worlds: Conversations with Robert Silverberg is released, what is next for you?

AZA: I’d like to try my hand at a science fiction novel next, something short and intense, in the mode of some of my favorite works from the 1970s. I also plan to continue writing short stories, book and film reviews, and would be open to doing another book of Conversations with a different author as well.

DJ: Before we go, what is that one thing you’d like readers to know about Traveler of Worlds: Conversations with Robert Silverberg that we haven’t talked about yet?

AZA: I just want to thank you for your questions and interest! The book comes out on August 16th, from Fairwood Press, and may be purchased directly from them, or via Amazon, or from IndieBound. Additionally, for those folks attending WorldCon, there will be a special panel to discuss the book on Saturday 20th at 1 pm. And I hope to be able to travel to San Francisco in September for a discussion and Q&A on the book with Bob for the “SF in SF” series, on Sunday the 11th.

*** Traveler of Worlds: Conversations with Robert Silverberg is published by Fairwood Press and is available TODAY!!! *** 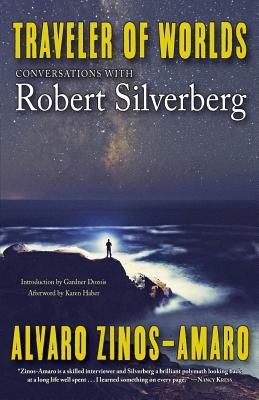 In addition to exploring Silverberg’s career, now in its sixth decade, this collection of transcribed conversations delves into aspects of Silverberg’s life-such as his extensive travel, passion for film, opera and classical music-not covered elsewhere.

A decade-and-a-half-long friendship, and working together on When the Blue Shift Comes, afforded Alvaro the opportunity to speak at length with Silverberg. The result: a remarkably candid series of conversations that will be of interest to science fiction readers and anyone curious about the writing life.

Alvaro started publishing around 2008, and has had more than thirty stories appear in magazines likeAnalog, Nature, Galaxy’s Edge, The Journal of Unlikely Entomology, Lackington’s, Mothership Zeta,Farrago’s Wainscot and Neon, as well as anthologies such as The Mammoth Book of the Adventures of Moriarty, The Mammoth Book of Jack the Ripper Tales, The 2015 Young Explorer’s Adventure Guide, Cyber World, This Way to the End Times [edited by R. Silverberg], Humanity 2.0and An Alphabet of Embers. Alvaro’s essays, reviews and interviews have appeared in The Los Angeles Review of Books, The First Line, Asimov’s, Strange Horizons, Clarkesworld, SF Signal, Foundation,The New York Review of Science Fiction and Intergalactic Medicine Show; he also edits the roundtable blog for Locus.
Tagged Alvaro Zinos-Amaro, author interview, fairwood press, robert silverberg, Traveler of Worlds, Traveler of Worlds: Conversations with Robert Silverberg