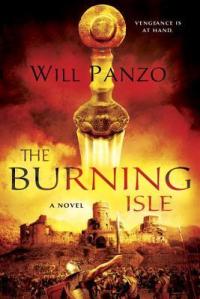 Today I am interviewing Will Panzo, debut author of the new grimdark, fantasy novel, The Burning Isle.

DJ: Hey Will! Thanks for agreeing to do this interview!

Will Panzo: Thanks for having me! I’m a physician assistant by trade, working in a busy emergency room, but writing is my passion. The Burning Isle is my debut novel. I live in New York City with my fiancé.

DJ: What is The Burning Isle about?

Will: I describe it as a dark and violent revenge tale, set in a fantasy ancient Rome with lots of intrigue and lots of magic.

DJ: What were some of your influences for The Burning Isle?

Will: The story is, on one level, about a mysterious stranger who arrives in a lawless island run by two gangs, and his attempts to play both sides against each other. In this way, the story has obvious ties to Sergio Leone’s A Fistful of Dollars, Akira Kurosawa’s Yojimbo and Dashiel Hammet’s Red Harvest. On another level, the story is a dark revenge story with a central mystery that acts as the primary driver of the action. I love revenge stories but my favorite is probably The Count of Monte Cristo.

Will: Cassius is a young spellcaster, very naïve and very powerful. Obsessed with myths and legends, he fancies himself a kind of white knight figure who comes to this lawless town, Scipio, to right a great injustice. Although he strives to live by a strict moral code, he’s soon confronted by a harsh world that tests his resolve. Death and violence seems to be the only means to effect change. It’s tough work and it weighs on Cassius heavily. I think it’s the dissonance between these two aspects of Cassius, the hero he wants to be and the hardened killer he has to become to do his work, that is most compelling. END_OF_DOCUMENT_TOKEN_TO_BE_REPLACED