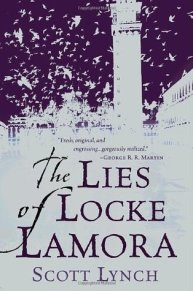 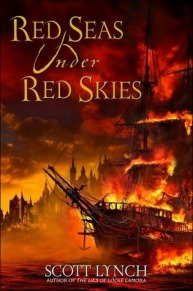 To prepare for that, Kaja is going to be rereading Lies of Locke Lamora, and invited me to join her in a read-along of the entire Gentlemen Bastard series.

As I said earlier, there are too many series out there I want to read, so, choosing which series to start next can be an incredibly difficult decision. However, getting invited to do a read-along with the series, and seeing as how A Year and a Day In Old Theradane is the best short story for me this year, it was no brainer that this was the perfect time to start the series!

This reading schedule is also perfect timing too, because The Thorn of Emberlain is scheduled for release next July.

We are not being selfish though, and would love for you to join us and read along! 🙂 If you are interested please comment down below, we will add your name to the list of readers.

Here is Kaja’s master post for the read-along. (Which I fell is a lot more concise than mine – so go read hers!)

I hope some of you will join in, but if not, will come back to read our reviews! 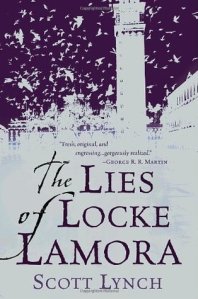 With what should have been the greatest heist of their career gone spectacularly sour, Locke and his trusted partner, Jean, have barely escaped with their lives. Or at least Jean has. But Locke is slowly succumbing to a deadly poison that no alchemist or physiker can cure. Yet just as the end is near, a mysterious Bondsmage offers Locke an opportunity that will either save him or finish him off once and for all.

Magi political elections are imminent, and the factions are in need of a pawn. If Locke agrees to play the role, sorcery will be used to purge the venom from his body – though the process will be so excruciating he may well wish for death. Locke is opposed, but two factors cause his will to crumble: Jean’s imploring – and the Bondsmage’s mention of a woman from Locke’s past: Sabetha. She is the love of his life, his equal in skill and wit, and now, his greatest rival.

Locke was smitten with Sabetha from his first glimpse of her as a young fellow orphan and thief-in-training. But after a tumultuous courtship, Sabetha broke away. Now they will reunite in yet another clash of wills. For faced with his one and only match in both love and trickery, Locke must choose whether to fight Sabetha – or to woo her. It is a decision on which both their lives may depend.

One thought on “The Bastard Read-Along”