Guest Post: The Importance of Worldbuilding by Megan E. O’Keefe

Megan E. O’Keefe lives in the Bay Area of California and makes soap for a living. (It’s only a little like Fight Club.) She has worked in arts management and graphic design, and spends her free time tinkering with anything she can get her hands on.

Megan is a first place winner in the Writers of the Future competition, vol. 30. Steal the Sky is her first novel.

You can find Megan online at meganokeefe.com and@MeganofBlushie on Twitter.

The Importance of Worldbuilding

I love character-driven fiction. Give me a strong voice, solid motivations, and a protagonist willing to act, and I’m on board. But no character exists in a vacuum. They, like us, are products of their world and their upbringing. In genre fiction especially, characters are inextricably linked to the world you craft around them. For a character to be compelling, so too must be the world in which they inhabit.

It was worldbuilding that first lured me into writing fantasy. I found the idea of secondary worlds (worlds created from whole cloth) to be absolutely fascinating. You can create anything at all; the only limit is your imagination and what your readers are willing to believe. A well crafted world can transport you to fantastical, impossible places. Through internal consistency and vivid imagery, a well built world can also increase a story’s verisimilitude to make the reader feel as if they’re really there. Possibilities abound, but unfortunately writers too often fall into the trap of re-imagining medieval Europe, or perhaps the Renaissance.

There has been a rise in variety of fantastical worlds over the last few years, but I’d love to see these boundaries pushed harder. I’d love to see more of the new weird’s spirit of experimentation bleeding over into “regular” fantasy landscapes. New writers, if you’re out there reading this, I implore you: push yourselves. Reinvent your elves, or throw them out altogether. Chuck the standard broadleaf forest out the window in place of something new, something never seen before. Make something up. Don’t be afraid to experiment, to invent, or to explore corners of the globe or pockets of time that are often ignored.

I ask this of you for selfish reasons. I love having my imagination stretched and my worldview challenged. Where I think worldbuilding really shines is when it helps us examine aspects of our own world and culture by re-framing them. That can be difficult to do when we’re all retreading the same old, tired ground. Diverse worldbuilding, just like diverse points of view, can open up the reader to new experiences. Perhaps even show a reader a new way of thinking.

When we shake up the framing device around social mores that might otherwise be viewed as normal or expected, we can free ourselves from our own cultural baggage and illuminate how true, absurd, or atrocious our assumptions might actually be. And if these shifted viewpoints resonate with us, we might just internalize them and take them with us into our daily lives. By this mechanism, carefully crafted secondary worlds can inform social change in subtle, often unnoticed ways.

Please do be respectful if you’re going to borrow from a culture that is not your own, and check with a member of that culture to make sure you’ve got it right. Otherwise – go wild. Embrace the fantastical, and all the strange possibilities your imagination can devise.

** STEAL THE SKY will be released on January 5 from Angry Robot Books! ** 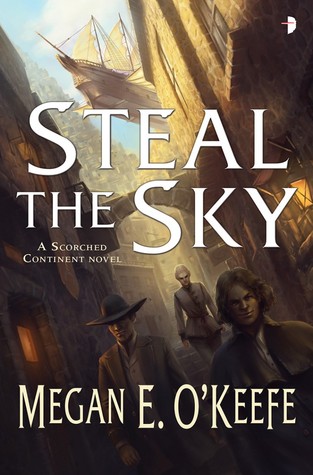 Detan Honding, a wanted conman of noble birth and ignoble tongue, has found himself in the oasis city of Aransa. He and his trusted companion Tibs may have pulled off one too many cons against the city’s elite and need to make a quick escape. They set their sights on their biggest heist yet—the gorgeous airship of the exiled commodore Thratia.

But in the middle of his scheme, a face changer known as a doppel starts murdering key members of Aransa’s government. The sudden paranoia makes Detan’s plans of stealing Thratia’s ship that much harder. And with this sudden power vacuum, Thratia can solidify her power and wreak havoc against the Empire. But the doppel isn’t working for Thratia and has her own intentions. Did Detan accidentally walk into a revolution and a crusade? He has to be careful—there’s a reason most people think he’s dead. And if his dangerous secret gets revealed, he has a lot more to worry about than a stolen airship.

2 thoughts on “Guest Post: The Importance of Worldbuilding by Megan E. O’Keefe”