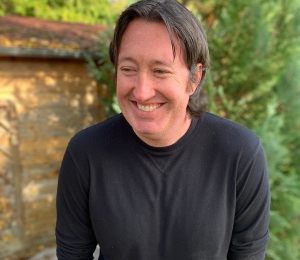 DJ: Hi Ron! Thanks for agreeing to do this interview!

Ron Walters: Thanks for having me! I’m originally from Savannah, GA, but moved around a lot as a kid because my dad was in the Coast Guard. At the moment I live in Germany with my wife, two daughters, and two rescue dogs. When I’m not writing I work as a substitute teacher at the high school where my wife teaches language arts.

DJ: What is Deep Dive about?

Ron: Deep Dive is a sci-fi thriller about a video game developer named Peter Banuk who’s so obsessed with salvaging his floundering career that he spends more time working than he does with his wife and young daughters. When he tests an experimental VR headset designed by his tech genius business partner and friend, the headset malfunctions and knocks Peter out. After coming to he discovers that his daughters no longer exist, and he’s somehow the hugely successful game developer he’s always dreamed of being.

DJ: What were some of your influences for Deep Dive?

Ron: There are so many to choose from. Dark Matter and Recursion by Blake Crouch were definitely more recent influences in terms of the kind of book I wanted Deep Dive to be. Same with Tad Williams’ Otherland series, which I read way, way back when I was in college–nothing I’ve read since has quite surpassed its scope and inventiveness, especially where VR is concerned. I’m also an avid gamer, so when I first started plotting Deep Dive I knew I wanted it to focus on video games in some way. It really wasn’t until I watched a documentary on the development of God of War (the 2018 one) that I finally nailed down the main character and plot. END_OF_DOCUMENT_TOKEN_TO_BE_REPLACED