Today I am interviewing Beth Cato, author of the new fantasy steampunk novel, Breath of Earth.

DJ: Hey Beth! Thanks for coming by AGAIN this month! This time, for your new novel, Breath of Earth.

So tell us: What is Breath of Earth about?

Beth Cato: The book follows Ingrid Carmichael, a secretary for the Earth Wardens in San Francisco. Unbeknownst to the wardens, she is a far more powerful geomancer than they are. When most of the wardens are killed, it falls on Ingrid to act as a buffer to keep earth energy from causing a cataclysmic earthquake in the city. At the same time, tensions are high with Chinese refugees in the city, and everything threatens to explode at once.

DJ: What were some of your influences for Breath of Earth?

BC: Foremost, my own background as a native Californian growing up with earthquakes and a great deal of curiosity about the “Big One” that hit San Francisco in 1906. I don’t hide that an earthquake happens in my book, but the reasons for it are quite different. I also harken back to the video games I loved growing up. Readers like to find the tribute Easter eggs I hide throughout my books.

DJ: Could you briefly tell us a little about your main characters?

BC: Ingrid Carmichael is twenty-five, and as a woman and a person of color, she is regarded as nigh worthless in society. She grits her teeth and holds back her wit and her magic as she pours coffee for the wardens. Thanks to her adoptive Japanese father, she is highly educated, and she loves to read. Mark Twain is a favorite of hers.

Another of my characters is Cy Jennings, a southern gentleman and a machinist by trade. He runs a repair shop South of the Slot along with his recalcitrant partner, Fenris. Cy has the bearing and discerning eye of a soldier, and more than a few secrets in his past. He also considers Mark Twain to be a favorite author of his.

DJ: What is the setting for the Breath of Earth series like?

BC: It’s an alternate version of 1906. The American Civil War ended early thanks to a Japanese alliance with the Union, and now, decades later, the two forces are partnered as the Unified Pacific and trying to dominate China. Many desperate Chinese refugees have crowded into San Francisco, but America is not offering much of a refuge. I don’t shy away from the racism of the period, and even though it’s alternate history, most everything I cite is based on fact. Ingrid deals with her share of racism, too, but she deeply loves San Francisco. It’s her home. She’ll do whatever she can to keep it safe.

DJ: Could tell us more about these geomancers and what your magic system is like?

BC: Geomancers act as buffers during an earthquake–they draw in the energy that would cause a quake. However, this energy creates heat in their bodies, and the high temperature can kill them in minutes unless they are in contact with a special kind of rock, kermanite. Kermanite draws the energy out and traps it inside until it can be tapped by machinery, wherein it’s like a battery. Kermanite runs everything from flashlights to airships. Therefore, geomancers are a major force for public safety and they also effectively channel the energy that powers the economy and the military expansion.

DJ: What was your favorite part about writing Breath of Earth?

BC: The research. Which was my least favorite part, too. I learned so much in writing this book, and I could probably continue to research until the end of time in my effort to get all the details right!

BC: Fenris. People adore Fenris. He steals every scene he’s in.

DJ: What is your goal in writing the Breath of Earth series? Breath of Earth is only the first book, but is there a particular message or meaning you are hoping to get across to readers when it is finally told?

BC: I’m really glad you asked this! At the end of the book, I included an author’s note where I break down what really happened in history. I delve into a lot of things that we aren’t taught in school about what happened in California at the turn of the 20th century and how Chinese immigrants were treated. I include my research bibliography in the book–and on my website–with the hope that readers might seek out nonfiction on these topics. It can make for difficult reading, but it’s relevant in our current world.

DJ: When I read, I love to collect quotes – whether it be because they’re funny, foodie, or have a personal meaning to me. Do you have any favorite quotes from Breath of Earth that you can share with us?

BC: I have a line from Cy that shows his developing relationship with Ingrid: “I’m doubly honored, miss. You didn’t shoot me, and now you want to lend me books.”

DJ: Now that Breath of Earth is released, what is next for you?

BC: Edit its sequel, Call of Fire! That is due out next summer.

DJ: Before we go, what is that one thing you’d like readers to know about Breath of Earth that we haven’t talked about yet?

BC: There’s more magic than geomancy in this book. Magical creatures play a major part, too.

*** Breath of Earth is published by Harper Voyager and is available TODAY!!! *** 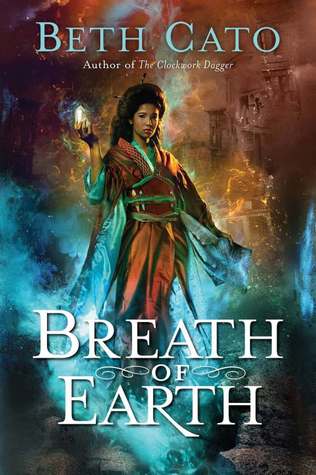 After the Earth’s power is suddenly left unprotected, a young geomancer must rely on her unique magical powers to survive in in this fresh fantasy series from the author of acclaimed The Clockwork Dagger.

In an alternate 1906, the United States and Japan have forged a powerful confederation—the Unified Pacific—in an attempt to dominate the world. Their first target is a vulnerable China. In San Francisco, headstrong Ingrid Carmichael is assisting a group of powerful geomancer Wardens who have no idea of the depth of her power—or that she is the only woman to possess such skills.

When assassins kill the Wardens, Ingrid and her mentor are protected by her incredible magic. But the pair is far from safe. Without its full force of guardian geomancers, the city is on the brink of a cataclysmic earthquake that will expose Earth’s powers to masterminds determined to control the energy for their own dark ends. The danger escalates when Chinese refugees, preparing to fight the encroaching American and Japanese, fracture the uneasy alliance between the Pacific allies, transforming the city into a veritable powder keg. And the slightest tremor will set it off. . . .

Forced on the run, Ingrid makes some shocking discoveries about herself. Her powerful magic has grown even more fearsome . . . and she may be the fulcrum on which the balance of world power rests.

Beth Cato hails from Hanford, California, but currently writes and bakes cookies in a lair west of Phoenix, Arizona. She shares the household with a hockey-loving husband, a numbers-obsessed son, and a cat the size of a canned ham.

She’s the author of THE CLOCKWORK DAGGER (a 2015 finalist for the Locus Award for Best First Novel) and THE CLOCKWORK CROWN (an RT Reviewers’ Choice finalist) from Harper Voyager. Her next book, BREATH OF EARTH, is out in August.