Backlist Burndown: The Providence of Fire (Chronicle of the Unhewn Throne #2) by Brian Staveley

Completely forgot I still had a couple novels reviews stored away for the Backlist Burndown! (so no, sadly, this is not me having free-time to read in medical school). 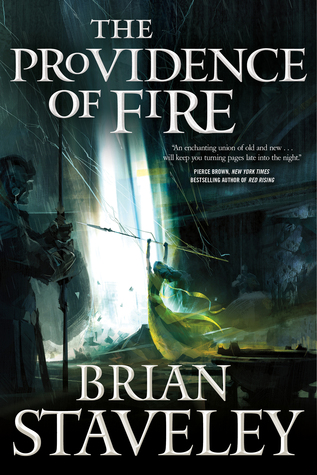 This was why I nominated Brian Staveley for the 2016 John W. Campbell Award

Brian Staveley’s The Providence of Fire, the second novel in the Chronicle of the Unhewn Throne, a gripping new epic fantasy series.

The conspiracy to destroy the ruling family of the Annurian Empire is far from over.

Having learned the identity of her father’s assassin, Adare flees the Dawn Palace in search of allies to challenge the coup against her family. Few trust her, but when she is believed to be touched by Intarra, patron goddess of the empire, the people rally to help her retake the capital city. As armies prepare to clash, the threat of invasion from barbarian hordes compels the rival forces to unite against their common enemy.

Unknown to Adare, her brother Valyn, renegade member of the empire’s most elite fighting force, has allied with the invading nomads. The terrible choices each of them has made may make war between them inevitable.

Between Valyn and Adare is their brother Kaden, rightful heir to the Unhewn Throne, who has infiltrated the Annurian capital with the help of two strange companions. The knowledge they possess of the secret history that shapes these events could save Annur or destroy it.

After I finished The Emperor’s Blades (my review), everyone kept telling to me wait until I read Providence of Fire; that if I loved The Emperor’s Blades that much, then what Staveley brought to the table with Providence of Fire was going to blow me away! After reading this, I can confirm that all the rumors were true: I could not put this book down!

Valyn and Kaden have finally been reunited, but it is under horrible terms – a massacre at the monastery. Valyn and his team, Kaden, Tan, Pyrre, and Triste, are hiding in the mountains deciding what move to make next. Kaden, now Emperor, decides that he and Tan, will go another gate to reach the Ishien, to ask for their help, while the rest are to fly to Annur to contact Adare to let her know of the situation.

Adare now has a note from her father claiming his suspicion that the kenarang, Il Tornja, was his murderer. She believes her only course of action now to be able to defeat Il Tornja is get her own army, The Sons of the Flame; the same group whose leader she had killed. To get an opportunity to meet wth the Sons of the Flame leader, Adare decided she will dress as a peasant, and join one of the pilgrimages.

This novel was fast-paced! I’m talking action, drama, and suspense on every single page! The Emperor’s Blades finished with bang! Tensions high! And The Providence of Fire picked up at exactly that same spot – except only gained moment (if you can believe that’s even possible) – and the plot did the same as well, with Kaden’s and Valyn’s opening chapter, and Adare’s, opening at the next moment after where they ended in Emperor’s Blades.

Speaking of Adare, a common complaint from The Emperor’s Blades was that she was not feature enough before. Well, there is a reason she is on the cover of this book 😉 She has a major role this time around, and I’ll be honest, at times, I legitimately hated her. I liked her last book, and was rooting for – and I still am now – but because we know the situation going on with Valyn’s, Kaden’s, and Gwenna’s POVs, the actions she was taking and her thoughts about what she thought was true and right… I damn near threw my book across the room! There is one scene where her and Valyn meet, and Valyn is trying to tell her something, but because of her strong-will and determination to see justice for her father’s murder (and a load of misinformation), she would not listen to him! I cannot describe how frustrated that was to read!

This may sound like I don’t like Adare, but I did! In fact, it was because I liked her, and all the character so much, that I was able to become so invested in them and their decisions. I believe that is what you call “compelling characters.”

Each of the Malkeenian’s are growing into their own too. You can see how great a leader Kaden will become because of level-mindedness that the monks tought him, and you can see how quick to act the Ketteral made Valyn; how patient and calm Kaden is, while quick to anger and reckless Valyn is. Often times when reading each chapter, I couldn’t help but reflection on how each of them had grown from when we first met them, and that left me wondering how each of them would have handled a situation had they been in each others place?

You should have noticed before that I said Gwenna’s POV before. Yessiree, that is correct! And was awesome surprise that was! Gwenna had seemed fairly cold-hearted, and grouchy most times, but getting a glimpse into her head, really put her decisions into perspective for me.

Aside from her, Pyyre gets a lot more focus – which was great, because I love her character and hope that we a get a novel of her own one day (note: I wrote this reivew back in March 2016… before Brain announced The Skullsworn was being released) – and also Triste. I won’t say why Triste is so special, but it was mystery that had me guessing a long while.

Other great surprises were where we get to meet the Urghul this time. The stories about how ruthless and violent they are is correct – I mean, they do worship Meshkent, the Lord of Pain and Cries. Oh! We get to meet the Ishien monks too! Tan came from them (and we all know who badass he is), so I was super-stoked to finally get to see where he originally came from; the place where they actually hunt the Crestriim. I think who the Ishien turn out to be was the greatest shock. Then, there also two characters, Nira and Oshi, that Adare meets on her pilgrimage.

Oh yeah, this book gets violent too; I have no issue using the word “Grimdark” to describe several of the scenes.

The only complaint I have, and this may sound weird, but I felt the plot was almost too fast. The plot never even titles to side, and which I awesome, but I wanted to be able to smell the roses a little bit; tell me more of all those details about Urguhls clothes, and Ashen’s home. Personally, I love world-building like that, and it can be very refreshing, after a long stretch of tension. Something else I notice was Staveley’s prose seemed… different…. this time around? Last time, I praised his vocabulary through the roof, but this book, I didn’t notice it. Still has gorgeous prose, but it is simpler than before. Did anyone else notice that change or was it my imagination?

As said it after finishing The Emperor’s Blades, and I’ll say it again: I’m expecting great things from the last booksof this series, and am predicting big things to come from Brian in the future of fantasy. Keep an eye out for his name.

5 thoughts on “Backlist Burndown: The Providence of Fire (Chronicle of the Unhewn Throne #2) by Brian Staveley”