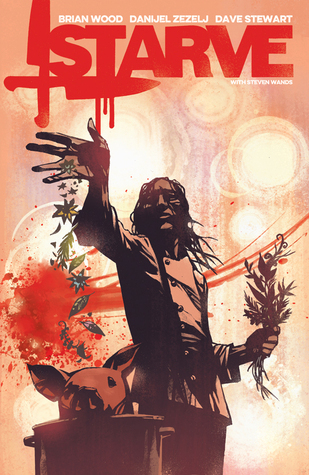 And the plot thickens!!!

Daughter joins father on stage for a special, blood-drenched taping of Starve. A market pig has 13 pints of blood in its body, did you know that?

This issue has everything: the daughter, Angie, played a huge role, the ex-wife, Greer, comes back into the story, the cooking competition in the episode is intense and gruesome – I loved and cherished every single page of this issue!

Meanwhile Greer, the ex-wife, has no idea about their interactions. She still believes that Angie is refusing contact with Gavin and has the same kind of opinion of him as her. So when Gavin brings up his special assistant – Angie – for the next taping of Starve… needless to say, Greer is more than shocked.

This issue is focused on the relationship between Gavin and Angie. We still don’t what happened to Angie when Gavin first left or how she felt about it, but it is very clear that Gavin feels an immense amount of guilt for this, to the point where he can’t even cook for her.

The episode of Starve involves butchering a pig (yes, this issue does get gruesome and dark), and allows contestants to bring on a guest to help them. Gavin has a few motives for bringing Angie on: it will look good to the judges, Angie does take after him in knowledge and culinary skills of food and cooking, he knows it will piss Greer off to no end seeing him with her on live TV, but the main reason is because Gavin loves Angie, and this is his chance for him to spend time with her that he missed out on. And through out the competition, that what it feels like. Gavin is not nearly as focused on cooking for the judges, as he is cooking with and for his daughter.

With this pig, Gavin has to make 3 separate dishes, and what I thought was cool and an awesome bonus, was that issue how tell you how each of these dishes is made! It’s not a step by step intrusions, but it gives you all the ingredients you’ll need and gives you a basic outline of how to cook them!

We have only seen Greer a bit in the first issue until she appeared in this issue’s first few pages, so I had an uncertain opinion of her. While my first instinct upon meeting Greer was to hate her, I didn’t know if that was justified; I wasn’t sure if I should be rooting for Gavin to stick it to her, or if I should feel bad that Greet is seeing him being with Angie. We knew nothing, and still don’t know any details, about Gavin and Greer’s split, expect that Greer was none too happy. For all I know, it could have been worst case scenario: she stuck at home taking care of baby, while he’s on TV, going out to drinking and smoking, and cheating on her. However, after seeing Angie, and how Greer reacts at the end of the story, I am #TeamGavin all the way, and I hate Greer, and I hope Angie tells her off.

As you should be able to tell by now, we are getting an excellent development of the characters and their dynamics. And as a reader, it is actually difficult for me to decide who I should feel sympathetic for – except for Angie; she such a sweetheart. The plot, as you should have also been able to tell from this review, is really taking off because of the introduction of Greer and Angie into the story now; this is not simply a story about Gavin trying to win back his show and put the rich in their place. When I read the first issue, I thought that this series was going to have a lot to offer, and this third issue completely confirmed that.