Guest Post Review: Before They Are Hanged by Joe Abercombie (Reviewed by Jevon Knight)

Jevon Knights is a sci-fi/fantasy writer and blogger who wants to entertain with amazing stories and enlighten with great content. He posts science fiction fantasy topics on his blog, Knights Writes, and invites you to download his collection of short stories “the Knights Scroll” for free.

Before They are Hanged (The First Law book 2) Review 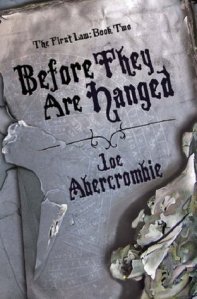 War has started between the major powers of the Circle of the World.

Midderland’s Union of Adua has sent its regiment north to Angland to battle King Bethod’s army. The nobles see this war as just a game for glory, but they will learn just how tough the Northmen truly are. Not forgetting the land to the south, Superior Glokta is sent to the city of Dagoska in Gurkhul to defend it from the gathering Gurkish forces. There he will experience, for the second time, the might of emperor Uthman-ul-Dosht, but not before finding the traitor from within the city. And the First of the Magi leads a group of adventurers to the edge of the World to break the First Law.

Before They are Hanged by Joe Abercrombie continues the First Law trilogy with great settings, long journeys, lots of action, and a few awesome spells thrown in for good measure, making it even more enjoyable than the first book.

The Story and World

Some time has passed since all six characters were assigned new duties at the end of book one, and they’re already well on their way. Glokta touches down in Dagoska. Once a simple torturer, now Superior of the city, he has his work cut out for him. He must investigate what happened to his predecessor, Superior Davoust, who has disappeared from his room without a trace.

Along with this, he must defend the city from the impeding Gurkish attack. They crowd the peninsula, with more arriving every day. With the King’s regiment already committed to the war in Angland, Glokta must fortify the miserably city, and gather an army, all with limited resources. His broken body doesn’t help, as he’s always in pain, but lucky for him he has the help of his Practicals: Severard, Frost, and the newly recruited Vitari.

At the docks, he’s greeted by a member of the city’s Inquisition and immediately begins his investigation. After a visit to the cell deep under the city, Glokta shuffles to the meeting chamber of the ruling council where he takes charge, giving instructions of fortifying and ensuring there’s enough provisions to withstand a siege. The council members don’t take it well, but are forced to obliged, for now.

Major Collem West has been ordered to the war in Angland, reporting to Marshall Burr and torn between the opposing views of General Kroy and General Poulder. To make things worse, he has to babysit the Crown Prince of the Union, Ladisla, and his useless band of dandies, sent to a not-taken-seriously war as a way to look brave and proud.

There West encounters the Dogman and his band of Northmen, led by the infamous Threetrees. All they want is peace in their land and the Northmen team up with the Union boys to fight the self-crowned King Bethod and his army.

Meanwhile, Bayaz, first of the Magi, along with Jezal, Logen, Ferro, his apprentice Quai, and their guide brother Longfoot, journey to the edge of the World in order to obtain a piece from the other side to break the First Law. With this Beyaz believes he can defeat the true enemy, the prophet Khalul and his Thousand Words.

Their journey is truly as long as it sounds, and just as memorable. Starting in the western land of Calcis, the ancient city-port of the Old Empire, they continue west over the Great Plain, open grassland that stretches hundreds of miles, to the river Aos, the greatest of all rivers within the Circle of the World. Even after they cross, their journey is only half complete.

They encounter many dangers. The Old Empire is a land of self-appointed emperors and power-hungry bandits who send their men to raid villages and kill travelers. And then there’s the Shanka, vicious ape-like creatures that just want to kill everything.

Joe really ups the story with this second book. While the first book sets the stage, this one really propels things forward, answering many question introduced earlier on. We get to learn more about the Master Maker, and that there were actually three other ancient masters. We learn exactly who the prophet Khalul is, we get a taste of the Eaters, we get to dive into the culture of Angland and the Northmen, and we get a glimpse into the mysterious Bayaz’s past.

The settings are split between the woods of Angland, the city of Dagoska, and the ancient lands to the west. Angland isn’t much but trees, rivers and mountains, dotted with camps and villages. It’s a cold wilderness, and Joe does a great job in reminding us every step of the story.

Dagoska is a city of Gurkhul that has been taken over by the Union. Joe doesn’t do as great a job as describing it the way he did Adua in book one, but you do get a sense of its division between Union nobles and Gurkish slaves. It’s separated into two where one side is rich and taken care of and the other is more of a slum.

The Old Empire in the west is where Joe’s descriptive writing shines. Through the journey of Beyaz and his group, you get to experience amazing sites like the Great Plains, the mighty river Aos, the ruined city Aulcus, the Broken Mountains, and the distant island Shabulyan at the edge of the World.

Joe’s writing continues to be tight with great descriptions, and tons of expletives, depending on the character. It doesn’t feel unnecessarily long like the first book, and that’s not just because it’s about 70 pages less since there’s still a hefty 441 pages of story to read through. There’s lots of action in this one, a lot more than in book one, and while it still didn’t happen often, Bayaz shows off even more of his awesome power.

Now I don’t mind if two characters hook up, but simply get them to bed, dim the lights, and get on with the story.

Each character continues to have their own writing style and view of the world. Glokta didn’t impress me as much as he did in the first book. While the cynical and funny thoughts felt fresh and original before, here it started to feel worn out. His story is still interesting, but the other characters’ experiences are much more enjoyable.

I love how West moves up the ranks and releases his vicious side. And where I hated Jezal’s selfish nature in the first book, I loved how Joe evolves him to a respectable man. I did find Jezal could have seen more action before he got injured, which would have made his revelation even better, but it still works.

Logen is still my favorite character. And Ferro, not so much.

My biggest disappointment: no Bloody-Nine. Joe really teased us with an awesome voice through the Bloody-Nine in book one so it’s a bit of a letdown not to find him here.

Before They are Hanged gracefully continues the trilogy with enjoyable writing and an entertaining story. Joe ups the settings, the action, and the character experiences, resulting in another epic read that took me straight into grabbing book three.

I highly recommend you get it and check it out.

Be sure to check out:

2 thoughts on “Guest Post Review: Before They Are Hanged by Joe Abercombie (Reviewed by Jevon Knight)”