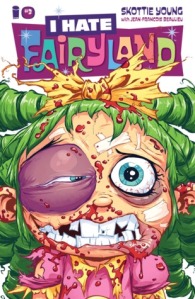 Queen Cloudia is forced to bend the rules of Fairyland in hopes to rid their world of Gert once and for all.

This comic is still not getting old, and it is still not a one trick pony. As I expected, the plot did become more of a focus this issue, moving a good distance forward. I did feel this issue read faster than there others – part because it straight fun to read and part because the dialog was lacking. But in the plot, there were a couple surprises at the end that left me saying, “what the heck the just happened?!”, while simultaneously laughing out loud XD

When we last left off, Gert was face to face with roughly a thousand or so zombies. Guess who won that fight? After that walk in park, Gert is off to continue her epic and life-long quest to find the key home.

Meanwhile, Princess Cloudia is none too pleased that another attempt on Gert’s life has failed, and goes to enlist the help of The Council of Chambers. Here, she asks for permission to do the only thing that she can think of, that will finally let her kill Gertrude… 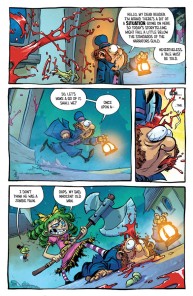 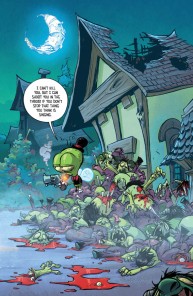 While I said this comic isn’t a one trick pony, and in my last review said Skottie isn’t repeating any of his jokes, that was technically a white. Having a new narrator from The Narrator’s Guild start of each issue, seems like it is going to be a running theme in the series – I am not complain at all though! It nice to start off the issue by already laughing before the first page is done XD

Aside from mentioning Queen Cloudia trying to kill Gert in various ways, the only characters I have actually focused on in my reviews so far have been Gertrude, herself. Well, I would like to take this time to mention the one brave, and true hero character: Larry, Gert’s guide in Fairyland. Remember when we first met Larry? He was this happy little green fly with a smile, introducing himself as “Hello! I’m Larry Wentsworh III. I’ll be your guide.” That versions is long, long gone. Granted, that version has been gone since the like 5th page of the first issue, but this issue, it really hits home how much Gert has ruined his life. That unshaved beard, smoking the cigar, with those bloodshot, hungover eyes – that fits his characters so well now. I always felt bad the guy, but now, I just wanted to give the poor guy a hug because I really felt for him (and because he wouldn’t be able to the tears streaming down my face from my laughing).

These past issues have been reading very quickly for me, but I’m not sure if thats a good thing or a bad thing. If I read a book and say it flies by, that is a good thing; with this comic, I can’t tell. I know I am enjoying these 110% of the time I’m reading it, but I want to say there is a lack of depth, somewhere, in the comics – but I can’t point my finger on what it is exactly. This issue in particular flew by more so that the others, mostly in part because there is an 8 page section, where each page is cut into two vehicular panels. That isn’t me giving a complaint; that is the part where I got a good chuckle reflecting on Larry’s life – but with the start of issue feeling like it was missing some substance, I was a little sad to realiz I was already at the last few pages.

However, those last few pages we a doozie! Those couple surprises in story that left me in complete shock, all come at the end.

Now that I think about it, what I feel is lacking in the comic, is a little more depth to plot. Hilarious, entertaining, and fast – but it is missing that little twist to make things interesting. I think Skottie may have found the solution that problem, with the curveball he threw at the end here 🙂