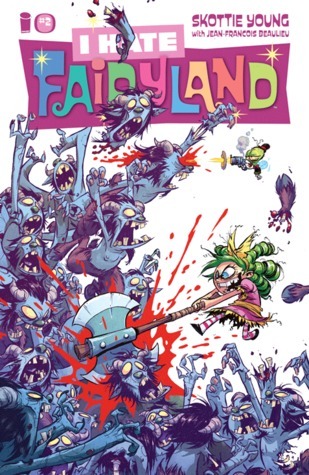 Seriously, this is hilarious!

Does Gert die by the axe of her assassin, Bruud The Brutal? Spoiler: Probably not.

That first issue was not a fluke; all the humor, from the characters to the dialog, to the drawings and to satire on fairy tales, is all still here. I did feel that the plot advancement was a little lacking, but nothing to take away from the enjoyment of the issue. I actually thought a very good job at deepening Gertrude’s character.

When we last left off, Gertrude was face-to-face with the Huntsman; guess who won that? XD Gertrude is now off to find that fluffin’ key in the Giggling’ Giants – or maybe it was the Tickling’ Trolls? Either way, Gert has to go mess some fairytale creatures up.

While Gertrude is off on her twenty-seven year key quest, Queen Clouds has another trick up her sleeve to eliminate Gertrude once and for all.

Remember how issue #1 started off with the moon narrating the Gertrude story to the reader? This time, we see a monocle wearing mouse has taken over the job – and he is none too optimistic about how things will turn our for him (and rightfully so!) XD From there, we go into a tavern we see Gert drinking troubles away and more over Skottie making fun of all the fairy-tale tropes.

Granted it has only been two issues so far, but best I can see, Skottie has not repeated the same joke twice – in terms of picking on certain fairy-tale tropes. For example, we see the frog turning into a prince, and the evil witch with the poison apple. This issue is again PACKED full of these jokes, but it was all fresh, new material. There are even new huggin’ fluffin’ swears! Some of my favorite were:

What stood out most, by far, in this issue was Gertrudes development. Anyone who might have thought that series was going to be a cheap, shallow, funny read, would be severely mistaken. When we are at the bar in the beginning with Gertrude drinking, she actually opens us and reveals to use a little bit about he is dealings with being stuck here all these years; then again, when we are heading off the Horn & Hoof, again, we see how much Gertrude wants to be back home. Granted she does all the opening up in her own violent, vulgar ways, but it does give us light into seeing that Skottie did not make Gertrude a one-dimensional psychopath – there is a reason for why she likes blowing up the moon and stars.

As I said in my introduction paragraph, the plot I felt was a little lacking, but I am okay with that because of how much we focus on Getrude’s character. However, with the situation that Gert find herself in at the end of the story, I have a feeling that plot will pick up – very very quickly.