*Frank Morin was kind enough to provided half a dozen (6) ebooks and one (1) hardcover copy of Rune Warrior (The Facetakers #2) to go along with his interview! The link and details for the giveaway are located at the bottom of the post, following the interview 🙂

DJ: Hey Frank! Thanks for stopping by to do this interview!

Frank Morin: Thanks for having me on, DJ. I’m a storyteller and an outdoor enthusiast, living in southern Oregon with the woman of my dreams and our four kids, who are the most brutal literary critics I’ve ever known. I’ve released novels in both my Petralist YA fantasy series and Facetakers sci-fi time travel thriller series.

DJ: What is Rune Warrior about? What can readers of the series expect in the latest installment? Anything new? Any surprises?

FM: I love this book. It’s a big, beautiful, epic story. It’s a fast-paced, world-spanning adventure set in the near future that also travels back through history, primarily focusing on the history of Rome. There’s action, romance, intrigue, a unique blend of magic and technology, and enough plot twists to knit a scarf.

DJ: What was your favorite part about writing Rune Warrior? What do you think readers will be talking about most once they finish it?

FM: Tough question, because there’s so much in this book. From questions of Sarah’s newfound abilities, to the truth about the mysterious man in the wide-brimmed hat, to all the revelations about what ‘really’ happened in history. But I think one of the funnest aspects of the story is Spartacus. He’s a riot, and you’ll see him like he’s never been seen before.

FM: The basic premise of The Facetakers is that Sarah gets drawn into the secret war between two shadowy groups with soul-based powers, just as they embark on a battle back through time, fighting for control of pivotal moments in history so they can siphon power to reshape the future.

DJ: What were some of your influences for The Facetakers series?

FM: The series has been described as Mission Impossible meets Assassin’s Creed. The high octane adventure spans the globe and travels back in time. It will definitely resonate with those franchises, but it’s fresh and unique and will stand on its own merits. I’m a fan of fast-action stories, and I love history. This series allows me to combine those into a unique adventure that delves into some very interesting themes.

DJ: Could you briefly tell us a little about Sarah? Does she have any cool quirks or habits, or any reason why readers with sympathize with her?

FM: Sarah used to be a body donor – working for a company that rented human bodies. While trying to escape before the company sold her body permanently, she discovered the truth about what was really going on behind the scenes. That led her into the world of the Facetakers. So she’s completely out of her element as she’s dragged into the center of the conflict, but resolves to do what it takes to survive. She’s got grit and courage and spirit, and a fresh perspective on a war that’s been raging for thousands of years.

DJ: What is the world of the The Facetakers series like?

FM: The story is set in the near future of our own world. Sarah learns that history is not what the books claim it is. The Facetakers are rare individuals who have the ability to extract a human soul by pulling their face off. They have lived for thousands of years, have secretly influenced world events from the shadows, but have written themselves out of history. So Sarah enters a world of shadow powers where her journey back into the past is fraught with danger, intrigue, and constant revelations about what really happened.

DJ: Earlier this year, I had you on the blog where you wrote an excellent guest post about magic systems! This novel is categoried as science-fiction and time-travel, but the book’s synopsis says, “Her natural talent with runes suggests a link to a rare soul power.” Does this mean there is going to be magic? Is it related to how the time-travel mechanism works?

FM: Yes, magic plays an important role in the story. It’s classified as sci-fi instead of urban fantasy or alternate history fantasy because it reads more like a sci-fi thriller. The technology used to drive back through time is closest to other ideas that have been explored in stories like Assassin’s Creed or The Matrix or Inception.

The magic fuels the technology and makes it possible. ‘Magic’ in this series is focused on soul-based powers. From the Facetakers’ unique abilities to extract human souls and insert them into other physical forms, to various types of runes that draw from the power of the soul, it’s the strength of souls that is the common link. I don’t want to delve too deep into the magic system to not share too many spoilers that will make the journey of discovery with Sarah so much fun.

DJ: Without spoiling anything, can you tell the readers where in time we will be traveling?

FM: In Memory Hunter, the series took off, and the concepts and fundamentals were established. That story jumped back to the fall of Berlin at the end of World War II. In Rune Warrior, the story jumps through the middle ages, where Sarah meets famous characters who are far more than we’ve ever known. But primarily, it focuses on the history of Rome.

I actually wrote Rune Warrior as an entry point for the series. Readers can start there, then go back and read the series prequel, Saving Face – Sarah’s story – and Memory Hunter. It’s probably easiest to start at the beginning and read them through in order, but for those readers who prefer diving right into Roman history, this might be the place to start.

FM: You bet. There are several antagonists in the story, but the primary ‘bad guy’ is a uniquely creepy fellow who haunts Sarah’s steps through time. Much of the story revolves around the efforts of Sarah and her team to track down the true identity of ‘the man in the wide-brimmed hat’.

DJ: When I read, I love to collect quotes – whether it be because they’re funny, foodie, or have a personal meaning to me. Do you have any favorite quotes from Rune Warrior that you can share with us?

FM: Absolutely. I love good quotes too. One of the fun things I did in both Memory Hunter and Rune Warrior was to start every chapter with a historical quote that sheds light and truth into the shadowed reality of the Facetakers. I’ve got quotes from Roman emperors, to Confucius, to Marco Polo, to Plutarch, to Winston Churchill, and many in between.

One great quote from Gregorios, an awesome character and one of the Facetakers Sarah gets to know well, is, “Some truths are eternal. Others last a lifetime. Know the difference.”

DJ: Now that Rune Warriors is released, what is next for you?

FM: I’ve jumped back to my YA fantasy series – The Petralist. Book three of the series, titled No Stone Unturned, is scheduled for release in October. Then it’s back to The Facetakers again to complete book three in the series, which I hope to release by the end of the year.

Pinterest: Check out boards created by my daughter at: https://uk.pinterest.com/savagoo/

FM: My pleasure. I enjoyed the chance to discuss the story.

*** Rune Warrior is published by Whipsaw Press and is available TODAY!!! ***

Please click on the Rafflecopter link below to enter to win one of a half a dozen (6) ebooks or one (1) hardcover copy of Rune Warrior (The Facetakers #2) by Clifton Hill! Good luck! 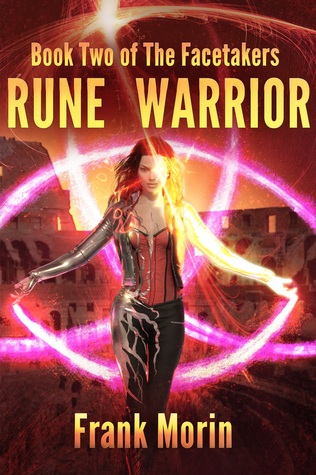 After surviving the fall of Berlin, Sarah prefers visiting happier memories, like the glories of ancient Rome. Until a mysterious man in a wide-brimmed hat begins haunting her steps.

The creep is more than a stalker. He plans to enslave her soul as the first step in a terrifying plan to dominate the world.

Her natural talent with runes suggests a link to a rare soul power, but is it enough to save both her and the world from a deviant psychopath? With time running out, Sarah must take a desperate gamble and travel back to the Middle Ages, seeking answers from iconic figures who hold the keys to the knowledge she seeks. One is a martyr, the other a mass murderer.
.

Frank Morin loves good stories in every form. When not writing or trying to keep up with his active family, he’s often found hiking, camping, Scuba diving, or enjoying other outdoor activities.

Frank lives in Oregon with his wife Jenny and their four children. In their home, storytelling is a cherished family tradition that keeps magic alive.

Frank is also part of the Fictorians, a group blog by writers for writers and fans of great writing. Check out their web site at http://www.fictorians.com.