DJ: Hey R.J.! Thanks for stopping by to do this interview!

R.J. Sullivan: I’m a writer known for my ghost stories and paranormal thrillers. I have a loosely connected trilogy of novels all released through Seventh Star Press and a short story collection, which makes Commanding the Red Lotus my fifth book release. The book is also my first venture into spaceship science fiction, which is actually my preferred genre when I read for pleasure.

DJ: What is the Commanding the Red Lotus about? I believe it is actually comprised of three novelettes?

RJS: Two novelettes and a novella make up a novel-length narrative and one satisfying story arc. The three stories are consecutive tales of westernized Japanese woman Sayuri Arai, telling how she comes to take on responsibility for the Red Lotus, a 40-year-old asteroid mining ship scheduled for decommission. At first she clashes with its crew and then work over time, she earns their trust as they prospect the solar system in hopes of making a living. The first one, “Fate of the Red Lotus,” sets up the series and is its own free ebook that you can download from here (link to https://rjsullivanfiction.com/fate-of-red-lotus/ ) The second novelette (“Innocence Lost”) is no longer available as a release, and the third one (“Mutiny on the Red Lotus”) is a novella of almost 30K of new words, so whether you’re coming in new or have read the first two installments, Commanding the Red Lotus has plenty of new material to offer.

DJ: What were some of your influences for Commanding the Red Lotus?

RJS: Star Trek is a definite influence. There’s a lot of Andre Norton thrown in there. Her Solar Queen books from the 50s, I suspect, influenced Gene Roddenberry and certainly influenced me when I read them in the 90s. The Mote in God’s Eye also comes to mind, and a lot of people say the series reminds them of Firefly, and I suppose that’s fair, though if I’m being honest, Firefly always seemed like an homage to the same sources I’m tapping. And that’s okay.

DJ: Could you briefly tell us a little about Sayuri Arai?

RJS: I tried to make Sayuri a blend of strong and willful but also naïve when it comes to what she was getting into. She is the daughter of a millionaire business owner and recognizes her privileged stature as a well-educated westernized Japanese woman and the boss’s daughter. But she fears the “golden handcuffs” of the Vice Presidency position ready for her on graduation day. Our story opens with Sayuri torn between doing what her family wants or striking out on her own. She recognizes the opportunity the Red Lotus offers and takes it. But stepping in as the commander of a mining ship because she happens to own the deed is a different sort of privilege, with responsibilities and problems that she’s ill-prepared to take on.

DJ: What is the universe of Commanding the Red Lotus like?

RJS: It is a world of the future that I keep as vague as possible but it’s a fairly near future. Earth is still the center of commerce but planets of the solar system have orbital space stations; Mars has a space station and some domed colonies. The transportation of goods and keeping open the pipeline of supplies creates many new opportunities, from construction and safety inspectors to security to asteroid mining, exploration, etc. And of course, colonization. And, because it’s very much a frontier, space pirates and other opportunists abound. One aspect that creates the divide between Sayuri and her crew is the “Spacer” mentality and what they see as her “grounder” roots (the pun is intended). Colonists and those who live on planet Earth continue to value home, family, traditions not too far removed from our own (“rooted” to where she comes from). But Spacers, those who keep the spaceships running and flying, are frequently being re-assigned according to the opportunity of the moment, so they have a more communal approach to sex and relationships, property, and they have their own unique ideas of loyalty and family. Part of Sayuri’s challenge is trying to understand this alien mindset.

DJ: What was your favorite part about writing the Commanding the Red Lotus?

RJS: Growing up, I had always envisioned myself as an SF author, and so coming around to writing in that genre after four books was a great joy for me. It made for easy writing.

RJS: I hope that SF readers will give me a try for the first time and find that I have something to say in this genre and have my own take on spaceship adventure. I also hope that the readers who already love my paranormal thrillers give it a try and find that I can tell compelling stories in a different genre. Those are my hopes, anyway.

RJS: I kinda hinted at it earlier. This story is inspired by the works of classic SF, when SF was primarily about going out and exploring space and discovering the mysteries of what’s out there. That said, I don’t want it to read like a story from 60 years ago; I want the stories relevant to a 21st century reader with the science accuracy and knowledge that we have today, applicable to a classic-styled adventure story.

DJ: Will future installments of the Red Lotus Stories be released as shorter-fiction first, than come together as a volume – or will they be released together right away as a volume/written as a novel?

RJS: The truth is, I abandoned the 99 cent ebook because I couldn’t figure out how to promote it well. That’s why I decided to grab up the first two stories and bundle the three stories together into a re-launch. Seventh Star stuck by me on that decision and supported it 100%. For future releases, I’m leaning heavily toward the digest-sized novella, which seem to do very well at signings and conventions. I think the next few stories will probably come out at a $5 price point at around 30K words each. There are many advantages to this; first, it’s more economical for the reader. It also means I can release more stories, faster, and at that length, I have to keep the pace tight and fast.

DJ: Now that the Commanding the Red Lotus is released, what is next for you?

RJS: I think I’m going to move right on into the next Red Lotus story.

*** Commanding the Red Lotus is available to purchase TODAY!!! *** 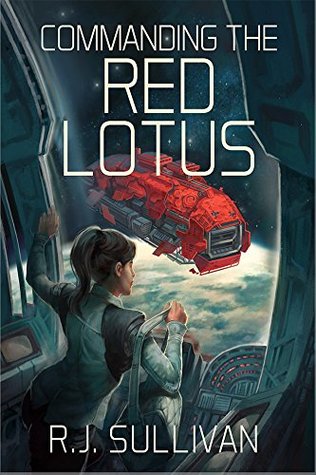 Sayuri Arai, privileged daughter of a corporate mogul, abandons a promising career to find her own path. She invests in a broken-down asteroid mining ship and steps in as the commander of its crew. Every day presents a new challenge just to keep her ship from falling apart and the bitter crew from killing each other. Can Sayuri unite the feuding factions, or will her rivals turn the entire complement against her?

Volume one of the Red Lotus Stories, now in softcover for the first time. Commanding the Red Lotus includes the previously released ebook novelettes:

Fate of the Red Lotus

Plus the brand-new novella Mutiny on the Red Lotus

Best known for his ghost story thrillers, Commanding the Red Lotus is R.J.Sullivan’s fifth book and his first release in the genre he most adores. R.J.’s critically acclaimed, loosely connected ghost story trilogy and his short story collection are all available in paperback and ebook though Seventh Star Press. R.J. resides with his family in Heartland Crossing, Indiana. He drinks regularly from a Little Mermaid coffee mug and is man enough to admit it.