Anyone who downloads a free copy of All roads lead to terror and leaves a review on Amazon.com before midnight on August 20, 2016,will be entered into a drawing for a one of a kind candy jar to take place on August 21, 2016.

Full details about the giveaway can be found here: http://www.richardschiver.com/p/giveaways.html 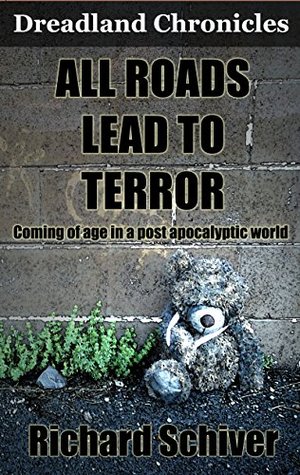 The horrors of the past meet the brutality of the present.

On the day of his birth the dead walked and society crumbled. His mother took one look at him and pronounced him Meat. He survived, she didn’t.

Fourteen years have passed and obscurity means survival in an increasingly dangerous world. For the survivors compound at Bremo Bluff that obscurity is threatened when a savage band abducts a group of children from the compound.

Accompanied by his three friends Window, Einstein, and Billie-Bob, Meat embarks on a quest to rescue the children. A journey that will lead them into adulthood, with a brief detour through the Dreadlands, as they confront the harsh reality of a brutal world beyond the barriers that had served to protect them.

In the dead city of Richmond they will confront that savage cult of children who worship a creature of the night. These creatures, once considered the nightmare imaginings of a fevered mind, are now awake in a world where the population that once served as their food source has been reduced. 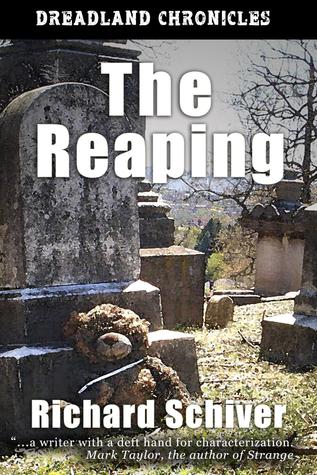 Man is no longer alone at the top of the food chain.

From the East a new threat to a struggling civilization emerges, spreading across the land like a cancerous stain, leaving in its wake the shattered remnants of a species teetering on the brink of extinction.

After the dead walked and society crumbled, mankind struggled back from the brink of extinction. Having fled the cities, the survivors lead a more pastoral lifestyle, while the cities to the east stand as silent monuments to the former progress of man.

But they are not empty.

Not only did mankind leave behind the trappings of his progress, but the creatures of the night that once fed along the shadowy edges of a well lit world. Inhabiting that twilight space between day and night, between what is real and imagined, between dreams and nightmares.

In Bryn Mawr Window is infected when he is bitten by a Reaper. As he struggles against the rising bloodlust, viewing his friends as a potential meal, they set out to the East in the search of a cure.

Along the way they learn more about the nature of the world they inhabit, their own past, and the part they each play in a potential future. Crossing paths with a shadowy figure who leaves small tokens from each of their own history. Little objects that carry powerful emotions linked to major changes in their past lives.

In the nations former capitol they are confronted by the master who reveals the cold truth about the cosmos as he prepares his own army of the undead to enslave what remains of mankind.

They heard her before they saw her, whistling a soft tune, a haunting melody that was anything but  upbeat. Like a funeral dirge best shared during the procession when the casket takes its final journey to the grave. From around a bend in the small stream the sound came, competing with the babble of the water rushing over smooth stone, and the restless voice of a soft breeze that stirred what leaves remained, their dead bodies chattering against one another like skeletons dancing a frenzied jig.

Cautiously they approached the sound, coming upon an old woman kneeling on the bank as she washed clothes in the cold waters of the stream. Her calloused hands were red with the cold, and as they rounded the bend she pushed herself to her feet with the help of a gnarled cane, tilting her head to one side like she could hear their footsteps on the grassy bank.

“I been waiting for you boys to find me. Mama said you would be around,” she said as the hem of her long dress caught in the moving water and the fabric drank its fill. She wore a black shawl stretched across her shoulders, her white hair in stark contrast as it rested against her back.

“Don’t be bashful now, I know you’re out there, I can smell ya.” She turned her head to look in their direction, the cataracts coating her eyes capturing the sunlight to lend them a silvery appearance. Her face was a road map of wrinkles, each one denoting a different emotion, the lines radiating out from her narrow lips ready at a moments notice to punctuate a smile or a frown.

Window moved past the others, following the narrow strip of brown grass that served as a bank to keep the stream on its course. She blinked several times as he approached, taking a hesitant step back as he got closer, his six two frame towering over her diminutive five three posture.

“He got to you, didn’t he boy?” She said with a faint quiver in her voice. It was obvious she was frightened by Windows sudden movement, but at the same time she carried herself like one who was prepared to meet her end. She reached out with one hand, and gently caressed Windows cheek like a mother comforting her child.

“How did you know we was coming?” Window said.

She smiled then, relaxing her grip on the walking stick she used to keep herself upright. “Mama told me back when I was a young un. She said, Sophie, you help them four boys when they come, you wait right there, don’t go running off, cause they’s gonna need your help.”

“How long ago was that?” Window said.

“All my life I’ve known, and I’ve waited, cause mama told me I had to. From the time I was a wee child running barefoot down to old man Winner’s little store, I’ve known of you.”

“But that was before we were even born,” Window said as the others joined them and the old woman tilted her head to each in turn.

“You can see us?” Billie-Bob said.

She laughed then, her voice filled with a joy that helped push back the chill of the late fall day, offering a brief respite from the cold as a spreading warmth filled each of them at the sound of her merriment.

“Everything that has been, and is yet to be, has been writ down for those who know where to look,” she said before turning to look in Billie-Bob’s direction.

“I can see you with my heart, and that’s all I need. I can see your pain, you did something you thought was bad, but it wasn’t. Sometimes we are pushed to do things we otherwise would not do, for these things we can’t be held accountable, least ways not to ourselves. Where each of you are going you need to leave your guilt behind, it’s the only way you will survive, the only way the world as we know it will continue on its way.”

“What good is this world?” Einstein said, “why should we worry about letting it continue on its way.”

The old woman reached over and touched Einstein’s cheek, “I feel your pain son, but sometimes we have to know loss before we can know joy. It’s the way of the world and it won’t do us any good to fight it. You can’t see that now, but you will.”

“That’s why I’m here,” she said as she took Windows hand into her own, “he’s got something very bad in him,” she said as she nodded at Window, “they calls them reapers, I can see it hunkered down next to his soul, trying to hide from me. I can’t help with that, but I know what you need to do. Let’s go inside where we can talk.” She looked around, searching the woods around them for other intruders, the boys followed suit, finding only the empty forest.

When they turned back a small cabin stood behind the old woman. It hadn’t been there before, Meat was sure of it, it was like it had materialized right out of the forest behind them.

Unlike other writers who knew they wanted to write the moment they became self aware, Richard’s path to taking up the pen followed a more leisurely route.

As a child he wanted to be a fighter pilot, later he thought it would be neat to be a rock star. Unfortunately, as an introvert, he was not suited for the stage. Once he gave up the guitar, much to the relief of his parents, he turned his attention to making movies.

Armed with an 8mm movie camera, several rolls of aluminum foil liberated from the kitchen, and the spare bed sheets, he filmed his first masterpiece. The story was about a space ship crash landing in the woods behind his house. His sister starred as the damsel in distress while his little brother, wrapped like a mummy in the spare bed sheets, chased her through the woods.

His career as a famous director ended before it even got off the ground when on opening night his mother recognized the missing bed sheets and  aluminum foil resulting in his grounding for the remainder of that summer.

A voracious reader, he believes writing is the most intimate form of communication possible. The reader permits the writer access to their mind, and the readers reality dissolves as they focus on the narrative of the tale being spun.

His love of the macabre was sparked at an early age when he would sit on his grandmother’s porch listening to her tell ghost stories. During the summer he and his cousins would sleep in his grandmother’s back yard, within sight of the abandoned haunted house next door, and spend the night scaring one another with gruesome tales of shadowy creatures that went bump in the night.

During his life he has played a series of roles, husband, father, son, and lover, but his favorite by far is grandfather. He and his wife of twenty plus years have raised four children, and helped raise eight grandchildren. They provide a secure home to a yellow lab named Max and a cat who will answer to either Flame or Furball. His loving wife, Dena has experienced first hand the exasperation of living with a writer whose mind has a tendency to wander at the most inappropriate times. Yet she manages to keep his feet firmly planted on terra firma.

Richard can be found online at:

Written in Blood is Richard’s personal blog where he shares his thoughts on writing, and whatever else might strike his fancy.http://www.richardschiver.com

He can be contacted directly at rschiver@gmail.com and would be delighted to hear from you.

Sign up to be notified of new releases when they become available. He promises to never share your contact info, nor will he swamp your inbox with unnecessary crap. http://www.eepurl.com/2bYSf