Today I am interviewing Michael Swanwick, author of the new science-fiction and fantasy short story collection, Not So Much, Said the Cat.

DJ: Hey Michael! Thanks for stopping by to do this interview!

Michael Swanwick: In 1973, I came to Philadelphia with fifty dollars, a pack-a-day cigarette habit, and the mad conviction I could become a writer. Seven years later, my first two published stories placed on the Nebula Award ballot. Since then, I’ve published nine novels, roughly 150 stories, and countless works of flash fiction. Along the way, I’ve won several awards. I live for literature.

DJ: What is Not So Much, Said the Cat?

MS: Ten years of my life. There’s a lot encoded in these stories. Some of it, like my love of Russia and of Sweden and of paleontology or my Irish heritage, will be obvious to anyone. Much will not. But everything I did or was or learned in the past decade went into these stories.

DJ: What were some of your influences for the stories in Not So Much, Said the Cat?

MS: I’m part of the last generation to enter science fiction and fantasy having read everything of any importance in the genres. That’s not possible any more (I know; I’ve tried!) given how much has been written since. So I can claim literally every genre writer who came before me as an influence. Less subtly, “Goblin Lake” is spun off from an incident in Simplicius Simplicissimus by the seventeenth-century German writer Hans Jakob Christoffel von Grimmelshausen, “Pushkin the American” is of course about the Russian hero of literature, and “The She-Wolf’s Hidden Grin” is a reversal of one of Gene Wolfe’s most famous stories. I try to steal from the best.

DJ: Is there a particular theme or common ground to all of the stories?

MS: Exactly the opposite! I try to cover as much territory in as varied a manner as possible. The only commonality they have is that they are all fantasy or science fiction.

DJ: Are there perhaps a few stories that stick out as favorites that you wrote? What are those about?

MS: They’re all intensely important to me. I might single out “The Woman Who Shook the World Tree,” because it’s about a female physicist of world-class genius and actually behaves as badly as male geniuses do and because I briefly got to inhabit the mind of such a woman. “The Scarecrow’s Boy” pleases me because it makes the argument that decency might be an inherent quality of intelligence, whether human or not. “An Empty House With Many Doors” began because I was pondering what I’d do if my wife were to die – drink myself to death, probably – and over the years it took to write, it turned into a love letter to her.

DJ: How about some of your characters too; could you briefly tell us a little about them? Do they have any cool quirks or habits, or any reason why readers with sympathize with them?

MS: They’re all very different from one another so I’ll just choose the heroes of the stories I included to represent two series I’m midway through writing. In “Tawny Petticoats,” Darger and Surplus are con men in the Post-Utopian future, a time of advanced bioengineering but (for very good reasons) no electronics or heavy machinery. Darger is a grey, almost faceless man, and Surplus is a dog – he has full human size, stance, and intelligence, but also a tail, paws, fur, and so on. They believe that they’re good people who are having an excellent time and will at any moment make the big score that allows them to retire forever. In all three regards, they are completely deluded. But it is this delusion that keeps them going, whimsically analyzing and commenting on their world.

Franz-Karl Ritter of “The House of Dreams” is their diametric opposite. He is rigidly moral, almost totally humorless, and a kapitänleutnant in the Werewolf Corps (he’s not a werewolf himself; he can project his mind into that of a trained wolf). Europa is in the throes of a wizard war and, while there is no doubt that the invading forces represent an evil which must be defeated, his perpetual struggle is to retain a core of decency within himself, despite some of the actions he must perform.

DJ: Let’s move on to the setting of these stories now. Do you have any favorite locations that some of the stories in Not So Much, Said the Cat take place in?

DJ: Where did the idea for the title of your short-story collection, Not So Much, Said the Cat, come from?

MS: Desperation on the part of Tachyon Publications. My publishers discovered that for technical reasons they couldn’t use the title they originally intended. Since my last collection with them was titled The Dog Said Bow-Wow, they went digging in the new collection for a similar phrase. They found it in “Of Finest Scarlet Was Her Gown,” a story in which a young teenage girl goes to Hell to try to rescue her father and finds an unlikely ally in a talking cat.

DJ: What was your favorite part about writing Not So Much, Said the Cat?

MS: Writing stories I intensely cared about. Nobody can make a living off of short fiction anymore. So once a writer has mastered the novel, the only reason to write them is for love of the form. It took me forever to learn how to write short fiction. I’m not going to give that up.

DJ: What is it about the short fiction format that you like? Do you feel there is a particular advantage to telling your stories that way over the novel?

MS: The novel has been described as “a work of prose fiction at least 40,000 words long that has something wrong with it.” Nobody has ever written a perfect novel. But plenty of people have written perfect stories – I’ve done it myself.

A short story be comprehended in its entirety all in the same moment and so it can give you a perfect moment of understanding or terror or sympathy. Ideally, not a word of it will be wasted. Ideally, it will create a world that can be held in one hand and marveled at.

DJ: What was your goal when you began writing Not So Much, Said the Cat? Is there a particular message or meaning you are hoping to get across to readers when the whole collection is read?

MS: To write the best stories I could. To entertain. To teach. To chastise. To enlighten. To satisfy.

DJ: When I read, I love to collect quotes – whether it be because they’re funny, foodie, or have a personal meaning to me. Do you have any favorite quotes from Not So Much, Said the Cat that you can share with us?

MS: At one moment in “The Scarecrow’s Boy,” the robot protagonist explains his actions by saying, “We are as God and Sony made us.” I think those are words to live by.

DJ: Now that Not So Much, Said the Cat is released, what is next for you?

MS: I’m working on a novel called The Iron Dragon’s Mother. Twenty years ago I wrote a stand-alone fantasy called The Iron Dragon’s Daughter about a girl who’s been kidnapped by the elves and forced to work in a factory, building dragons. Ten years later, I wrote The Dragons of Babel, set in the same world, about a boy whose village is destroyed by war and who then becomes a refuge, then a freedom fighter, and ultimately discovers that he might be the rightful king of Babylon. It was a stand-alone too, but its mere existence made the two books an uncompleted trilogy. The Iron Dragon’s Mother will complete that trilogy in what is, I hope, a satisfying and surprising manner.

DJ: How have the reviews been for Not So Much, Said the Cat?

MS: Stunningly positive. Better than those that any of my previous books have received – and they’ve gotten reviews that would make a grown man blush.

*** Not So Much, Said the Cat is published by Tachyon Publishing and is available TODAY!!! *** 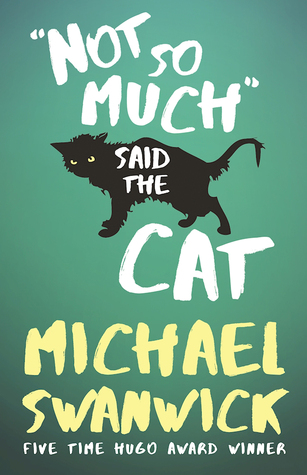 The master of short science-fiction follows up his acclaimed collection The Dog Said Bow-Wow with feline grace, precision, and total impertinence. Michael Swanwick takes us on a whirlwind journey across the globe and across time and space, where magic and science exist in possibilities that are not of this world. These tales are intimate in their telling, galactic in their scope, and delightfully sesquipedalian in their verbiage.

Join the caravan through Swanwick’s worlds and into the playground of his mind. Discover a calculus problem that rocks the ages and robots who both nurture and kill. Meet a magical horse who protects the innocent, a confused but semi-repentant troll, a savvy teenager who takes on the Devil, and time travelers from the Mesozoic who party till the end of time…

Michael Swanwick is one of the most acclaimed science-fiction and fantasy short-story writers of his generation, having received an unprecedented five consecutive Hugo Awards. He is also the winner of the Theodore Sturgeon and World Fantasy awards. Swanwick’s novels include The Iron Dragon’s Daughter, a New York Times Notable Book, and the Nebula Award–winning Stations of the Tide. His short fiction has appeared in many venues, including OMNI, Penthouse, Amazing, Asimov’s Science Fiction, New Dimensions, and Full Spectrum, and his work has been translated into more than ten languages. Swanwick is currently at work on a third novel set in Industrialized Faerie. He lives in Pennsylvania.