Leave a comment
By DJ (@Bookworm M.D.) Interview Aside

Today I am interviewing C.A. Higgins, author of the new science-fiction novel, Radiate, final book of the Lightless trilogy.

DJ: Hey C.A.! Thanks for agreeing to do this interview!

C.A. Higgins: Lightless was my first book, written while I was in college studying physics. After I graduated I decided to write novels and work in theater, just like my parents always hoped, but I still have a great interest in both science and science fiction.

DJ: What is Radiate and then the Lightless trilogy about?

C.A.: In the first book, Lightless, the small crew of a top-secret and highly advanced military spacecraft (the Ananke) discover a stowaway aboard their ship. They quickly learn he has connections to a terrorist (the Mallt-y-Nos) determined to overthrow their dystopian society, but the stowaway—Ivan—isn’t as helpless as he may seem. Meanwhile, the Ananke itself has been acting strangely, almost as if it were trying to communicate.

The second novel, Supernova, is about the Mallt-y-Nos herself; the heroine of Lightless, Althea; and Ananke, now a sentient machine; as they navigate the chaos of the solar system resulting from the end of Lightless. Radiate follows two characters who were missing from the events of Supernova: Ivan and his companion Mattie. In contrast to the heroines of Supernova, who all have a great deal of influence, for better or worse, over the state of the solar system, Ivan and Mattie are almost swallowed up in the chaos of the civil war. They’re desperately trying to survive, to catch up to the Mallt-y-Nos, to maybe right some of the wrongs they’ve caused—and to avoid the Ananke, who’s hunting them across the solar system and drawing ever closer. And, despite the immense loyalty and affection we saw between the two men in Lightless, their relationship has a number of unresolved tensions that the stress of their situation starts to bring out.

DJ: What were some of your influences for the Lightless trilogy?

C.A.: The Battlestar Galactica reboot was a big influence—the existential trauma of the Cylons influenced Ananke, and the idea of “humanity’s children coming home” and visiting doom on their progenitors while humanity runs itself ragged trying desperately to escape them had a big influence, especially, on Radiate. Blake’s 7, a very dark and yet also very campy British space opera from the early eighties, too, in the juxtaposition of a political idealist/terrorist/revolutionary leader with his crew of uninterested criminals. I read Sartre’s No Exit at a psychologically vulnerable time and it ruined me; I love the very pure tension of two or three characters locked in a box together and tormenting each other for no reason than that’s what happens when you put fire and oil adjacent. That shows up not just in the interrogation of Ivan in Lightless, but in the three-person dynamics of Ivan, Mattie, and the Mallt-y-Nos, which are an important part of Radiate.

C.A.: Ivan and Mattie are especially fun; they’re both very quick-witted, and their conversations in Radiate were a lot of fun to write. They’re motivated by positive things—love and loyalty—but at the same time, they’re conmen, and are responsible for a lot of terrible things that have happened. They have, as Ivan puts it in Radiate, a weight on their backs. Ivan is silver-tongued; no matter how vulnerable he seems, if he can talk, he’s got some degree of control over his situation. But he also has a drive towards self-destruction, and that drive doesn’t spare the people around him. Mattie is a small-time thief who enjoys good company, powerful computers, and having fun, but he finds himself in a position where he has responsibilities he never wanted and isn’t sure how to handle.

Ananke is an artificial intelligence awoken by Mattie and her programmer “mother”, Althea, at the end of Lightless. She’s struggling to understand her place in the universe and her own desires. Her introduction to humanity was a bloody and violent affair, and her actions reflect that. Her mother, Althea, is an introverted programmer with the simple desire to be left alone and allowed to work on her machine. She is not necessarily the ideal parent for a creature that models itself off humanity but does not understand what being human is.

The terrorist called the Mallt-y-Nos knows the price of her fanaticism, both in blood and personal relationships, and is willing to pay it; what she did not realize is that while she is determined to create a better world, she may not be able to recognize one.

DJ: What is the world and setting of the Lightless trilogy like?

C.A.: The Lightless trilogy is set a thousand years or so into the future, after humanity has terraformed most of the rocky planets and outer moons. There’s a very large class disparity between Earth, the birthplace of mankind, and the rougher habitats of the outer moons especially. That, combined with the very restrictive and very invasive government of the solar system, just called the System, has led to a lot of friction between Earth and the outer moons. A failed revolution right before most of the major characters were born, run by Ivan’s father Connor, made the System dramatically more reactionary to any threats, which correspondingly made the resistance movements even stronger and more violent—setting the scene for the Mallt-y-Nos.

DJ: What was your favorite part about writing Radiate and completing the final book in the Lightless trilogy?

C.A.: There’s a scene about three-quarters of the way through Radiate that brings together—or seemingly brings together—almost all of the major characters in the trilogy. It’s a very brief scene, but the relationship payoff from the interactions was very satisfying to write.

DJ: What do you think readers will be talking about most once they finish Radiate?

C.A.: The book is largely about Ivan and Mattie, and I think readers will mostly be talking about their relationship.

C.A.: Because I’m as far on the “plotter” side of the plotter vs. pantser scale as can be, plots don’t change too much for me after they’re outlined. That said, Radiate did have a major change from its original outline. I almost did a very terrible thing at the end of the novel, but got talked out of it by some wise friends on the grounds of “that doesn’t serve the story” and “that is really, really depressing, Caitlin.” The current ending fits the story much better and I’m very happy with it.

The evolution of Ivan and Mattie’s relationship also had a change from the original concept to something more interesting. More difficult, too, but ultimately more satisfying, and very important to me.

DJ: When I read, I love to collect quotes – whether it be because they’re funny, foodie, or have a personal meaning to me. Do you have any favorite quotes from Radiate that you can share with us?

C.A.: Without spoilers, one of my favorites is Ivan’s description of his mother Milla speaking: “Her voice was colored palely with regret, like paint off a brush dipped into water.”

I also very much like a short exchange between Ivan and (his nightmare of) Ida. He realizes he’s dreaming, and says to her, “It’s petty of you to haunt me.” She just replies, “People are petty.”

DJ: Now that Radiate is released, what is next for you?

DJ: Before we go, what is that one thing you’d like readers to know about Radiate and the Lightless trilogy that we haven’t talked about yet?

C.A.: Radiate is my favorite of the three—Lightless is very precise and tense, and Supernova is very dramatic and exciting, but Radiate has the emotional core and the emotional payoff of the series. 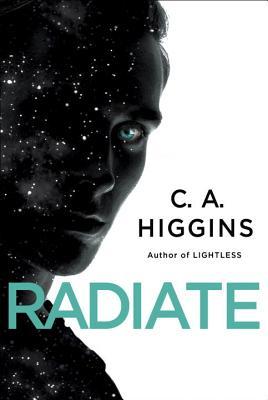 In the follow-up to Lightless and Supernova, C. A. Higgins again fuses science fiction, suspense, and drama to tell the story of a most unlikely heroine: Ananke, once a military spacecraft, now a sentient artificial intelligence. Ananke may have the powers of a god, but she is consumed by a very human longing: to know her creators.

Now Ananke is on a quest to find companionship, understanding, and even love. She is accompanied by Althea, the engineer who created her, and whom she sees as her mother. And she is in search of her father, Matthew, the programmer whose code gave her the spark of life.

But Matthew is on a strange quest of his own, traveling the galaxy alongside Ivan, with whom he shares a deeply painful history. Ananke and her parents are racing toward an inevitable collision, with consequences as violent as the birth of the solar system itself and as devastating as the discovery of love.

Along with writing novels, C. A. Higgins spent most of her time in college doing problem sets, translating vulgar Latin poetry, and fending off sleep deprivation.  It was while sitting in one of her physics classes contemplating the inevitable heat death of the universe that she had the idea that would eventually become her first novel, LIGHTLESS.  After becoming a runner up in the 2013 Dell Magazines Award for Undergraduate Excellence in Science Fiction and Fantasy Writing, she received her BA in physics before continuing on a linear career path by getting a job in theatre.  She currently lives in Brooklyn with aspirations of publishing more novels and learning ancient Greek.