Today I am interviewing C.A. Higgins, author of the new science-fiction novel, Radiate, final book of the Lightless trilogy.

DJ: Hey C.A.! Thanks for agreeing to do this interview!

C.A. Higgins: Lightless was my first book, written while I was in college studying physics. After I graduated I decided to write novels and work in theater, just like my parents always hoped, but I still have a great interest in both science and science fiction.

DJ: What is Radiate and then the Lightless trilogy about? 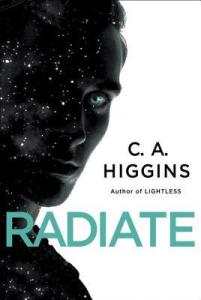 C.A.: In the first book, Lightless, the small crew of a top-secret and highly advanced military spacecraft (the Ananke) discover a stowaway aboard their ship. They quickly learn he has connections to a terrorist (the Mallt-y-Nos) determined to overthrow their dystopian society, but the stowaway—Ivan—isn’t as helpless as he may seem. Meanwhile, the Ananke itself has been acting strangely, almost as if it were trying to communicate.

The second novel, Supernova, is about the Mallt-y-Nos herself; the heroine of Lightless, Althea; and Ananke, now a sentient machine; as they navigate the chaos of the solar system resulting from the end of Lightless. Radiate follows two characters who were missing from the events of Supernova: Ivan and his companion Mattie. In contrast to the heroines of Supernova, who all have a great deal of influence, for better or worse, over the state of the solar system, Ivan and Mattie are almost swallowed up in the chaos of the civil war. They’re desperately trying to survive, to catch up to the Mallt-y-Nos, to maybe right some of the wrongs they’ve caused—and to avoid the Ananke, who’s hunting them across the solar system and drawing ever closer. And, despite the immense loyalty and affection we saw between the two men in Lightless, their relationship has a number of unresolved tensions that the stress of their situation starts to bring out. END_OF_DOCUMENT_TOKEN_TO_BE_REPLACED