DJ: Hey Linda! Thanks for agreeing to do this interview!

Linda Nagata: Sure! My first published story came out just over thirty years ago in Analog Science Fiction and Fact. Since then I’ve published numerous novels and short stories, mostly high-tech science fiction but some fantasy too. My first novel, The Bohr Maker, won the Locus Award for best first novel, a novella, “Goddesses,” won a Nebula, and more recently, my military thriller The Red: First Light was nominated for a Nebula award and named as a Publishers Weekly best book of 2015.

I like writing science fiction because it’s a chance to explore our relationship with technology—both the real-world challenges, and extrapolated possibilities that we might face “if this goes on.”

My books often trend into political issues, and I like to explore not just what I think people ought to do, but what I think they might do, whether I think it’s a good idea or not.

DJ: What is The Last Good Man about?

Linda: Meet True Brighton, a US Army helicopter pilot, now retired and working for Requisite Operations, a small private military company that she helped to found alongside former special operator and long-time friend, Lincoln Han. Like so many in the US Army, True comes from a military family. Both her father and her son served—but her son was brutally killed in the line of duty. True is haunted by his death. When a chance discovery during a hostage rescue mission indicates there is more to his death than she’s been told, she resolves to uncover the truth, regardless of the cost.

DJ: What were some of your influences for The Last Good Man?

Linda: Prior to The Last Good Man I wrote the Red trilogy—a series of near-future military thrillers. I learned a lot in the course of writing those books, so it seemed like a good idea to use that knowledge by writing something similar-but-different. The Last Good Man turned out to be quite different. One of the big influences, as the story developed, was the growing impact of autonomous robotics in the defense industry. In the story, the use of autonomous and semi-autonomous weapons is a critical factor in the success of a small PMC like Requisite Operations, exponentially enhancing the power of a small team of soldiers.

Linda: True Brighton is my main character. She’s a middle-aged woman, forty-nine years old, an army veteran and mother of three. I think I can safely say that she is an atypical protagonist for a military thriller. True is smart, efficient, and determined to write her own script for her life. For her, that means operating in the field, as part of a hostage-rescue team. It’s a career choice she is determined to hold onto for as long as she can meet the physical qualifications.

Another character is Lincoln Han, former special ops, principle owner of Requisite Operations, and a wounded warrior who is resolved that his company will always be a white-hat operation.

And there is Miles Dushane, an ex-Ranger, indie-journalist, and former hostage, who makes it his mission to see his captor brought to justice—a goal that makes him both friend and foe to True.

DJ: What is the world and setting of The Last Good Man like?

Linda: This is a cross-genre novel. It’s as much a military thriller as it is science fiction. It takes place in our immediate future, here on Earth, so it’s very much like the present day but with more advanced surveillance and autonomous robotics, along with political shifts that have allowed private military companies to operate freely in certain areas around the planet.

Linda: It’s been said many times that we live in a science fiction world. I love working in near-future settings because it’s a chance to explore the science-fictional aspects of our own amazing—and frightening—era, while pushing the technology just a little bit beyond what is possible now. So all the technology in The Last Good Man is extrapolated from existing tech, or tech that is under development.

DJ: What was your favorite part about writing The Last Good Man?

Linda: Finishing it! This was a tough novel to write and at times I wasn’t sure I was going to be able to pull it off, so it was extra special this time when it all came together and I could call it “done.”

DJ: Did you have a particular goal when you began writing the The Last Good Man? Was there a particular message or meaning you are hoping to get across when readers finish it? Or is there perhaps a certain theme to the story?

Linda: There are several themes but a prominent one is the way that a violent act tends to spawn more and more violence, even years after. I was also interested in exploring the effect of robotics, particularly autonomous robotics, on our sense of who we are, our place in the world, and how we value ourselves and others. What are the implications when battles are fought remotely, perhaps without human oversight? This is a critical question here and now, in the real world.

DJ: Now that The Last Good Man is released, what is next for you?

Linda: A lot of promotion! But after that winds down, I’ll need to get back to work on the next novel.

*** The Last Good Man is published by Mythic Island Press LLC and is available TODAY!!! *** 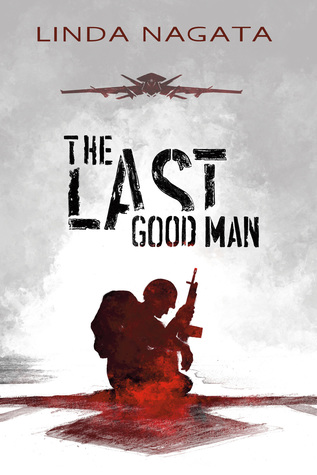 A near-future thriller by the author of the Nebula-nominated The Red: First Light.

Scarred by war. In pursuit of truth.

Army veteran True Brighton left the service when the development of robotic helicopters made her training as a pilot obsolete. Now she works at Requisite Operations, a private military company established by friend and former Special Ops soldier Lincoln Han. ReqOp has embraced the new technologies. Robotics, big data, and artificial intelligence are all tools used to augment the skills of veteran warfighters-for-hire. But the tragedy of war is still measured in human casualties, and when True makes a chance discovery during a rescue mission, old wounds are ripped open. She’s left questioning what she knows of the past, and resolves to pursue the truth, whatever the cost.

The Last Good Man is a powerful, complex, and very human tale.

Linda Nagata is a Nebula and Locus-award-winning writer best known for her high-tech science fiction including the Red trilogy, a series of near-future military thrillers. The first book in the trilogy, The Red: First Light, was a Nebula and John W. Campbell Memorial-award finalist, and named as a Publishers Weekly Best Book of 2015. Book 3, Going Dark, was a runner-up for the Campbell Memorial award. Her newest novel is the very near-future thriller, The Last Good Man. Linda has lived most of her life in Hawaii, where she’s been a writer, a mom, a programmer of database-driven websites, and lately, an independent publisher. She lives with her husband in their long-time home on the island of Maui.