Leave a comment
By DJ (@MyLifeMyBooksMyEscape) Interview, wyrd and wonder

DJ: Hi Nancy! Thanks for agreeing to do this interview!

Nancy Springer: Well, I’m almost seventy years old, but some things haven’t changed since I was a child. I get a lot more pleasure out of seeing a giant swallowtail butterfly than having a new bracelet. My idea of a good time is wading up a creek, especially if I find a salamander. I like to go off by myself on foot or a bike or a horse to explore the backwoods. I’m contrary; for instance, a lot of people loathe snakes, but I like them. I’ve always been an oddball. Being a social misfit gave me a difficult childhood, but now it works very much to my advantage as a writer, which has been my profession for my entire adult life. There are times when I am lonely because, as a self-employed individual, I don’t have co-workers, but thank Mothergod for my family – two brothers, two grown children, and my husband, who is my rock.

DJ: What is The Oddling Prince about?

Nancy: Two heroes and the bond between them, which should surprise none of my longtime readers, because just this sort of thing has been a frequent theme in my writing. Why? Because vivid, compelling, almost frightening daydreams along those lines have obsessed me most of my life since I was fifteen. The first fantasies I wrote, which were also my first novels, always had two noble heroes, faithful comrades, one dark, moody, poetic and visionary, the other sunny and prosaic, gallant and steadfast. In hindsight, I can see I was working out profound psychological problems — but interestingly, the compulsion to fantasize ceased sometime after I met my second husband, the love of my life. Still, a good while later, I wrote THE ODDLING PRINCE because of one last daydream I’d kept in memory, a tale of a seemingly ordinary prince and his oddling double. This time, however, neither of my heroes is dark and moody. Devoted to each other, both are tall and fair-haired, looking nearly as alike as twins. This time the grim, stormy element comes from someone with authority over them, the king. The result is a fraught triangle of turbulent loyalties. This book is about a love worthy of legend, valor in battle, fealty threatened by jealousy and suspicion, a seemingly doomed quest for the sake of brotherhood, and the dangers come in so many forms…forgive me for being so vague. I don’t want to let go a spoiler.

DJ: What were some of your influences for The Oddling Prince?

Nancy: The root influence for all of my fantasy novels goes back fifty years, to my college days: the early poetry of William Butler Yeats. After falling in love heart and soul with his very Irish vision (my father was an Irish immigrant), over the next decade or two I read cartloads of original material and research in Celtic culture and mythology. As for more recent influences, no, there are none that I can think of.

Nancy: Young Aric, a stripling prince, my protagonist and first-person point-of-view narrator throughout, is no oddling, at least not at the beginning. Prince Aric is merely the goodhearted, boyish son and heir of the king. Unlike his father, he is a “transparent” person, with no malice or hidden motives. Although dutiful, Aric can be a fun-loving tease, and while he does not excel in any of his royal studies, he can hurl stones with great force and accuracy. However, as he quips at one point, stonesmanship is not counted among the noble arts of war.

Albaric enters Aric’s life within the first few pages of the book, an eerie midnight visitant on a steed made of white light. He is the oddling who saves the king’s life with a magical device yet remains a stranger to everyone except Aric, who inexplicably feels his thoughts and feel his loneliness as if they were his own. With Aric’s friendship and support, Albaric is the only soul in Dun Caltor, the king’s castle, able to tame a magnificent blue steed, which he does partly by means of his music, for he plays the harp and sings like an angel. Also, he excels in swordsmanship and has an innocent tendency to ask difficult questions.

King Bardaric is a complex and unhappy man best revealed by the book itself. Queen Evalin, his wife, is a strong, wise, patient woman likely to exclaim “Fishheads!” when, rarely, she is provoked. Marissa, simultaneously an impulsive girl and a seeress-to-be, is introduced late in the book.

DJ: What is the world and setting of The Oddling Prince like?

Nancy: The setting is the Kingdom of Calidon, an isolated, far northern place, essentially ancient Scotland as it never was except in my imagination. Fishermen venture onto the cold sea at their peril, and the growing season is short, making for hungry winters. The vassals are restless, the forest rife with outlaws, and raiders from the Craglands threaten constantly. Although the king tries to be a good king, life is hard. Among the countryfolk there is a legend of a time when a White King arose from the sea, and all was peace and springtime while he ruled. But his best friend betrayed him, killed him to usurp the throne; the friend’s name was Winter. All of the kings of Calidon since have been “winter kings,” and the climate has been chill. King Bardaric is a winter king, a usurper, although not an evil one. But the countryfolk dream that the White King might come again.

DJ: What do you think readers will be talking about most once they finish THE ODDLING PRINCE?

Nancy: The emotional impact. More than one reviewer has said it made them cry, although not for sadness, exactly. I think and hope that the book achieves what Aristotle called “catharsis” and what I call “transcendence,” peace surpassing passion. Readers may be surprised that such a relatively short book can move them so. Jane Yolen calls THE ODDLING PRINCE “a small, perfect epic.” I like that.
Readers may also be struck by the “long ago and far away” writing style I’ve been practicing for decades. I’ve learned that poetic prose is not just a frill, but is integral to writing fantasy; such a story cannot rightly be told in any other way.

DJ: When I read, I love to collect quotes – whether it be because they’re funny, foodie, or have a personal meaning to me. Do you have any favorite quotes from The Oddling Prince that you can share with us?

Nancy: Very early in the book, when Aric first speaks to a despairing Albaric:
Greatly I feared the sea, yet I told him, “I would leap into the sea for you.” Simplest truth.

He whispered, “But – why?”
“I know not. It is a weighty and frightful thing,” I said in sober jest, “to be willing to die for a stranger.”

A little bit later, under the spell of Albaric’s music:
I saw myself as my father saw me…a modest, clear-eyed, strong and comely youth, gallant and true.

Late in the book,
In a changed tone, Albaric said, “Oh my heart, Aric, it’s good to have you back,” and he hugged me as never before, impulsively, then quickly turned away lest I see his face.

Toward the end, after Marissa’s arrival,
Mother asked, “You do not mind that she all but worships Albaric?”
“I all but worship Albaric myself. How could I mind?”
“But you seem to – “
“Love her? Yes.”

DJ: Now that The Oddling Prince is released, what is next for you?

Nancy: GrandGhost, a contemporary fantasy novel of mine, from Severn House, will be available in the USA in August. IDW will be releasing in October the first of a series of English translations of French graphic novels of my Enola Holmes novels. And to top all that, acclaimed young actress Millie Bobby Brown has signed with Legendary Entertainment to star in one or more feature films about Enola Holmes! Wowsers!

DJ: Before we go, what is that one thing you’d like readers to know about The Oddling Prince that we haven’t talked about yet?

Nancy: That I closed a chapter in my life, writing this book, and I wrote it with all my heart. That I deeply believe in the kind of love Aric and Albaric share.

Nancy: In many mythologies, the wholeness, welfare and fertility of the kingdom depends on the goodliness of the king. I’m thinking, rather ruefully, that this is too true. The health of the earth depends very much on the character of our leaders.

*** The Oddling Prince is published by Tachyon  and is available TODAY!!! *** 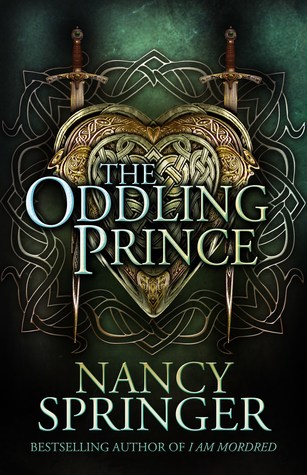 In the ancient moors of Scotland, the king of Calidon lies on his deathbed, cursed by a ring that cannot be removed from his finger. When a mysterious fey stranger appears to save the king, he also carries a secret that could tear the royal family apart.

The kingdom’s only hope will lie with two young men raised worlds apart. Aric is the beloved heir to the throne of Calidon; Albaric is clearly of noble origin yet strangely out of place.

The Oddling Prince is a tale of brothers whose love and loyalty to each other is such that it defies impending warfare, sundering seas, fated hatred, and the very course of time itself. In her long-awaited new fantasy novel, Nancy Springer (the Books of Isle series) explores the darkness of the human heart as well as its unceasing capacity for love.

As a child, I lived in Eden. I explored every inch of the fascinating brook that meandered crystalline amid wildflowers and willows to the swamp along the Passaic river where I discovered herons, hawks, muskrats, snapping turtles.

Coming home from school feeling bruised, I turned to the brook, the swamp, the fields of farmland and the deep forest on Riker’s Hill to comfort me. Until I was thirteen I ran like a freckled fawn where the owls lived, where the wild phlox grew, where sometimes frogs could be caught.

Then my family moved away. The place we left must have been the last remaining rural spot in Livingston, New Jersey. A year later we came back and I saw the trees bulldozed, the wetlands drained and the brook banished to a culvert, all for the sake of a housing development. I have grieved for Eden lost ever since.

Writing this, I realize for the first it might seem odd that, bullied in school, I turned to Mother Nature instead of my mother.