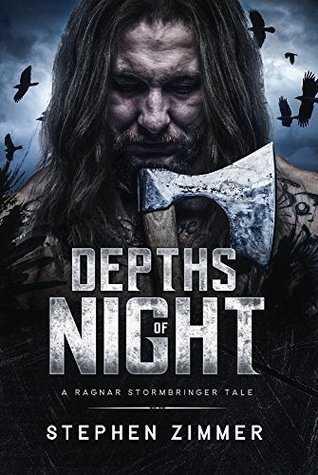 Depths of Night: A Ragnar Stormbringer Tale by Stephen Zimmer

A mixture between Kratos and The Odyssey

After a harrowing end to a long sea journey, the famed northern warrior Ragnar Stormbringer and a force of warriors step ashore in the lands of the Petranni, a tribal people known for their workings in silver and gold. The search for plunder takes a sharp turn when homesteads, villages, and temple sites show signs of being recently abandoned.

When it is discovered that the Petranni have all taken refuge within a massive stronghold, Ragnar and the others soon fall under the shadow of an ancient, deadly adversary. Wielding his legendary war axe  Raven Caller, Ragnar finds his strength tested like never before.

Stephen Zimmer is an author whom I have had on the blog for more interviews than any other author. Yet, I have never actually read anything by him! So, when I saw that Stephen was coming out with a novella, at the same time I was going on break, I knew this was the prefect opportunity for me to finally read his work!

Ragnar Stormbringer and his crew are on their way to island of the Petranni for plunder. However, when they arrive they cannot find any of the villagers. Instead, what they find are these winged beasts.

Very soon, Ragnar find himself forgetting about plunder, and more concerned with merely surviving and killing a God…

Immediately as I started reading, I could not help but feel like I was reading a story that was one part Kratos, from God of War, and one part The Odyssey.

The opening scene starts with Ragnar fighting these serpent sea-beasts as they are arriving to the island on boat. (On some levels, this probably did make my subconscious start think about God of War, because for those that aren’t familiar with video game series, a battle with a two-headed serpent is how the first game starts off). But what really got me was the brutality of the fighting.

One thing that vividly stands out to from all of Stephen’s interviews are his comments about his fight scenes: he mentions that one aspect of his writing that fans enjoy the most are his fights scenes. After reading his work, I can absolutely say that my favorite aspect of his writing is the fight scenes. It really felt like I was reading this epic, bloody battles that I had always played as Kratos in God of War. (Another similar is both Kratos and Ragnar are out to kill Gods and they don’t give a $&@% that they are gods).

Aside from the fighting though, Ragnar himself also has a bit of Kratos in him in that he is unapologetically violent, and will kill you without a second though. The difference between the two is that Ragnar is justified in his ways. Ragnar see no issues in taking any number of different women to his bed, but never would nor has he forced a lady; he is great leader and will take the time to teach members of his crew, but if he were to see you running from battle or directly disobey any oder, he will kill you without thinking about it.

Ragnar himself was an interesting character for me, in that at the start, it was hard for me to determine if he was unique character. My first impression was that there was this badass, warrior viking named Ragnar. Nothing wrong with that. It is the perfect type of character for the story! But, for a while I was struggling to determine was if this was merely a stock character named Ragnar, or if Ragnar was going to become a character unto himself?

Personally, it felt like all the character’s monologues at the start were very predictable. I could guess where they going with it, was type of joke they were going to make, or if it was a common metaphor/simile. The same went for the actions fo Ragnar. However, I am pleased to say, that by the end of the story Ragnar felt character was unique to him. You will notice type of mannerisms or ways in which he talks, and at one point you get an in-depth look into Ragnar’s past and into what motivates him to be the type of leaders and person he is.

The side characters though… yeah, they still felt fairly generic; perfect for the role the story needed, but nothing I can really say that made them stand out to me.

As I had mentioned before, it also felt like a mix of The Odyssey. This was because of the plot. As in The Odyssey, Homer wanted to go home, but kept pulled off into side quests, detours, getting trapped on various islands, and running into mythological creatures – this is basically what happens to Ragnar. He originally comes to an island for plunder, but discovers it being run over by mythical beasts, which turn out to be pets of a Goddess, and soon Ragnar find himself forgetting about plunder and becomes focused on defeating this Goddess.

(I want to mention, that while Depths of Night reminded me of God of War and The Odyssey, in no way do I mean to imply that this is any type of retelling, nor am I saying that they were an influence to Stephen of any kind. I am just saying that those two works best reminded me of the story and I felt it was accurate description of what a reader would feel when the read it, and thus make fore a better review).

Badass warrior protagonist, enticing mythology, and a fast and brutal plot… I am extremely happy that I finally sat down to read some of Stephen’s stories, because I had a great time reading this! I can see why readers love his fights scenes so much!. I don’t know how the novella series will progress, but I could see it being something along the lines of Ragnar going off to different lands to find more demons and gods, or maybe more fights off at sea with beasts of the deep.

Whatever it is, novella is the perfect reading length for me (if I had the time, I would be going to one of his series next though) and this story kept my attention 100% of the time. You can be sure I’ll be reading the next installment.