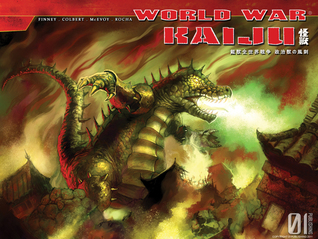 What if Doctor Strangelove created Godzilla? World War Kaiju is the story of an alternate history, one in which the atom bomb was never created and the ultimate weapon of mass destruction is the kaiju fifty foot tall radioactive beasts spawned from the mysterious KAI-235 isotope. Follow the journey of one journalist as he teams up with a retired CIA operative to uncover the truth about the conspiracy behind the monsters… …who are the architects of the inevitable Kaiju War? …what is the shocking secret behind the mysterious KAI-235 isotope? …where did Cuba manage to hide a crab monster the size of an aircraft carrier? …why are rogue monsters appearing all over the world? …how long can Tricky Dick keep these truths from the people?

Ah, man… let me cut to the chase here: this was not a very good graphic novel. It had a lot potential too! Using Kaijus as weapons to end Wolrd War 2?! Sadly, the story did not focus on the monsters themselves, but instead on an interview between an ex-military/CIA agent and a reporter; most of the pages were filled with the transcript of this interview, with comic panels only here and there to point out certain moments; and the art.. well – I’ll get to that in the review itself.

It’s August 6, 1945, and this is the day that America is going to unleash their new weapon upon Japan to end Word War 2. It’s code name is “Fat Man”, but it became known as “Ryujin, the king of beasts”…

And so starts Agents Hampton’s interview with reporter Keegan. From here, Hampton goes on to tell us about magical fairies visiting President Eisenhower, how these crystals the Kaiju came from were deposited on Earth  from “Planet Ten” by the “Zion”, how Mars tried to sell America a million dollar money making scheme, and how there are now giant mutant rats.

“Fat Man”, “Zion”, “Planet Ten”… Did those words stand out to you in the my synopsis? Well there are a ton more like that, and let me tell you, they always stood out to me when I was reading. I can’t tell if this was supposed to be “bad” funny or if they were just that horrible of names – but either way, it was a bad decision using these cliche, generic, and unoriginal names for people, places, and things in the story.

Going off of cliches, this story follows around Hampton, who is ex-military and CIA, and I guess in that time, USA probably had a very bad image of Russia and Japan and Germany in their minds – but the way Stalin is depicted and Japan in described sometimes, it felt a little more like prejudice and racism rather than over-the-top stereotypes. Meanwhile, USA is seen as the almighty powerful; calm, peaceful, but willing to unleash its power and anger at any moment. Again, I don’t know if this was done on purpose (the over exaggeration of the nation’s personality types), but, again, I think it was a bad decision. 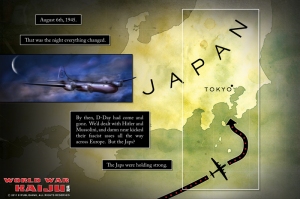 One thing that really bothered me was all those seemingly random aliens, pixies, and mars people (and a bunch of other random crap that I didn’t mention in my synopsis), that literally just comes in, as what I felt was like a tangent, and is just gone! Never to be visited again! Maybe if it was connected more to the Kaijus and the situation of how the world is, I wouldn’t mind the weirdness, but it’s not! These seemingly random events that happen when the story is told, they are never fully explained, or even remotely explained, why they are important to our story, before Hampton moves on to tell us more nonsense, that – even after I’ve finished reading the book – am still wondering why I need to know it.

This brings me to my biggest problem with the story: why is Hampton telling us all this? I am assuming the world is in totally disarray, but it is never told to us. Are there still Kaijus around? How does the public feel about Kaijus? Based off what Hampton tell us about a few incidents, I would think that by now the world should be destroyed!!! There is almost no context to this story being told, other than Wolrd War 2 ended with Kaiju, and basically started the Kaiju Cold War – other than that, not much about the current political or cultural or world situation.

Look, this story is an alternate history where nations started using Kaijus as weapons to end world war 2. That is so freaking awesome an idea – especially for a graphic novel! But the story does not focus on the Kaji! 😦 Instead, our story focuses on Hampton giving us a history lesson from his perspective on political events leading up to the present. That could still be good, but the execution was a complete fail.

This is a graphic novel, but I swear(!) there are just as many paragraphs of Hampton and Keegan’s interview transcribed than there are comic panels. (Each page is split with transcript and paragraph. I would show you a example, but there are no previews of it on the internet that I could fine). And this conversation between the two men is dull, boring, and dry – think the color gray. It didn’t feel like I was reading a graphic novel! It was like a reading a play again in high school; a play that is solely a dialog of a teacher giving a history lesson to a student 😦

This is the exact format it is presented in.

Maybe if the dialog had been put into panels, it wouldn’t have been as bad? Maybe the art would have distracted me a bit? Because this “half of the book is only the transcript” thing was not working for me. Actually, I don’t think panels would solved that problem… I –Ugh, I just can’t – I just can’t say anymore… Just click on the images I posted in my review. You’ll understand. I mean, is it too much effort to put a little bit of background detail in the panels?

You what I did LOVE about this graphic novel though? This bonus material that comes after the story is done. It’s called, “Project Anvil”, and it what the the story should have focused on. It goes into the Lexicon for different terms related to Kajiu and the science of studying them; a brief scientific explanation of how the crystals release the Kaijus; the growth and radioactivity of Kajius; Kaiju classification; it even goes into the psychology and tell us how the they are commanded and control!!! It was a complete shock to read something so compelling and captivating, I almost didn’t know what to do with my self!

This last section is great, but it begs the question: why wasn’t this in the story? How come Hampton gives us lame excuses in his interview why he can’t explain how the crystals make Kaiju, but then we get a whole section on it in back of the book? Sadly, again, as I was reading this bonus section, I kept asking myself why? The info here, really, has no relationship to the plot of the story – which seems to be Hampton explaining the events in the world, not the actual Kaiju themselves. So, even if I had known all this material before I read the novel, I can honestly say, it would have had zero impact on my enjoyment of the story.

I don’t know how to sum this in a conclusion paragraph;  I think… I think a lot of the decision made in what type of story was told (i.e. choosing not to focus on the Kaiju), and how the story was told (i.e. the stereotypes, lack of explaining) and presented (i.e splitting the each page with panes and transcript),  and what the plot contained (i.e. the random fires and aliens), was not the wisest of moves….