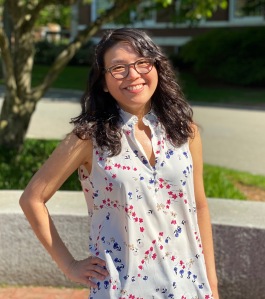 Today I am interviewing Isabel Yap, author of the new short-fiction collection, Never Have I Ever.

DJ: Hi Isabel! Thanks for stopping by to do this interview!

Isabel Yap: Hi! Thanks for having me. My name is Isa; I’m a writer from the Philippines. I started going by Isabel when I moved to the US, which is a decade ago now–mostly because when I introduced myself I would sometimes get, “Oh, Lisa?” as a response. I write fiction and poetry, I’m trying to learn how to write novels, and I work in the tech industry as a product manager. I like fanfic, manga, museums, places with lots of trees, and sweets of almost any kind.

DJ: What is Never Have I Ever about?

Isabel: Never Have I Ever is my debut short story collection. It collects stories written between 2011 and 2020, which span the genres of contemporary fantasy, near-future science fiction, horror, epic fantasy, and fabulism. It’s about being Filipino, so faith, food, and family are significant themes. It’s about grief and loss, the awkwardness of your twenties, and several different types of monsters, some who are friendly, some who are girls, some who are both.

DJ: Being an author, what do you believe makes a good short-story? How does it differ from wiring novel-length stories?

Isabel: I still don’t know how to write novel-length stories, though I’ve been trying with varying degrees of seriousness since at least 2005. Writing novels is extremely difficult, and I basically take Kelly Link’s cheeky view that novelists who say short stories are harder to write are lying. I’m really not one to ask for a comparison, having only managed one of those lengths so far. As for what makes a story good, there are specific things I care about: I like some attention to the line, I appreciate resonance, and I love it when I’m either surprised or my expectations are met exactly. I like when stories give me physical sensations. There are certain relationship arcs that are totally my jam, that will be easy for me to fall into; but I can be convinced to like almost anything if the execution delights me in some way.  In the end I think what makes a good story–no matter the length–is that, at its core, it’s about something real. I want to feel that the author crafted it thoughtfully, trying to get that realness across. In its bones it has to have truth, whatever that means for the author and the eventual reader.

DJ: This may… this will be a difficult question to answer, but what are some of your favorite stories in Never Have I Ever? I don’t mean what you believe is the best, but perhaps some stories have a particular setting, theme, message, or character that stood out to you?

Isabel: Asphalt, River, Mother, Child is a very important story to me. It’s about the Philippines’s current president and his War on Drugs, which is still ongoing. Mebuyen, my protagonist, is a work of re-imagination, but almost every other detail in the story is not. If you want to know more, I’d encourage you to read Patricia Evangelista’s The Impunity Series on Rappler, watch the documentary A Thousand Cuts, and read Dimas Ilaw’s Uncanny Magazine Essay, The Shape of the Darkness As It Overtakes Us. That story was me trying to put words to something unspeakable. It’s hard for me to believe that it can make a difference; it’s hard not to feel helpless. Still, I felt the need to try. The two most recent stories in the collection also mean a lot to me. A Spell for Foolish Hearts is about a witch boy in San Francisco, and it’s almost all character work. If it wasn’t in the collection I don’t even know what venue I’d submit it to. It hews quite closely to tropes and a structure one might find in fanfiction, so I was very glad it made it into the TOC. And A Canticle for Lost Girls was written during lockdown, as I was finishing grad school and job hunting. It’s a story I’ve wanted to tell for a long time, but I was missing the “key” to it, until I realized it could take the form of a braided narrative (it’ll be quite obvious reading the collection that I love this device), where one strand is the narrator, Raquel, speaking from a time when she has her own daughter. It’s my first published novella and I feel very tenderly towards it, partly because I wrote it in 2020, and partly because it was a story where I could have lost my nerve making certain choices, but I tried my best not to. I will always be very fond of A Cup of Salt Tears because I find it quite delightful and unsettling to make a kappa sexy. (I mean, have you seen Victo Ngai’s cover for it?) And yes, that was published before The Shape of Water won all the awards.

DJ: What was your favorite part about writing Never Have I Ever?

Isabel: As a collection, it wasn’t a continuous project, so it’s hard for me to say what my favorite part was. I will say that three of the stories (Milagroso, Anamaria Marquez, and A Cup of Salt Tears) were written at the Clarion Writers Workshop in 2013, which was a very joyful and freeing time in my life. To spend six weeks focused on words, reading other people’s stories, and privileging my own writing life above almost everything else–I haven’t had that since and I’m not sure I’ll have that again. It probably wouldn’t have the same effect if I went to a residency or workshop now, anyway. But I’ll always be grateful that I worked on these stories with that group of friends and those instructors, one lovely summer. I’m also very pleased with the idea that this book has Filipino monsters. We couldn’t include my tiyanak story, but there are a lot of other monsters still in there. I’m excited to introduce them to readers who may have never heard of them, but I’m equally excited to have Filipinos see and recognize them.

Isabel: I think conversations around short story collections tend to revolve around which stories worked best for the individual reader, and which didn’t. I do the same so I think that’s very fair! I hope that some people will be curious to learn more about the monsters or mythologies in the collection, of which there are many.

DJ: When I read, I love to collect quotes – whether it be because they’re funny, foodie, or have a personal meaning to me. Do you have any favorite quotes from Never Have I Ever that you can share with us?

Isabel: “Have you ever noticed yourself on your knees and thought Oh, I don’t like this?”

DJ: Now that Never Have I Ever is released, what is next for you?

Isabel: Writing-wise: I’m working on a book. It might be a novel. It’s a retelling of a Filipino epic poem that everyone (in local schools, anyway) had to read in high school, and it involves a magical healing bird and three princes, except I’m taking all the liberties and I’ve made the two protagonists women. The setting has similarities to How to Swallow the Moon, but I’m trying to do something tonally different. I’ve been trying to write it since 2014, but it’s really only in the past year where I’ve landed on a more cohesive throughline for it. We’ll see how it goes.  After that there are four more books I already want to write. I don’t know if they’re novels either. Then there are quite a few short stories, and quite a few fanfics, if I can find the time around work, life, rest, and being with my people. I love writing but it’s very difficult and draining, so I want to be sure I can enjoy life outside of writing too–at least once the pandemic is mostly over, and it’s safe to travel and hug friends and visit bookstores and museums again.

DJ: Before we go, what is that one thing you’d like readers to know about Never Have I Ever that we haven’t talked about yet?

Isabel: It’s not about the collection per se, but if you’re a reader and this is your first time reading fiction that predominantly centers Filipinos, I’d encourage you to seek out other Filipino authors. We have a very strong tradition of Filipinos writing in English…partly due to our colonial history, and our lingering colonial mentality…so there’s a great body of work out there that doesn’t need translation. Unfortunately, the books also often go out of print, even in digital formats. I was going to recommend Alternative Alamat and The Best of Philippine Speculative Fiction 2005-2010 as anthologies, but they don’t seem to be order-able (or the latter only in the Philippines).  Still, some starting points: Eliza Victoria, Vida Cruz, Nikki Alfar, Kate Aton-Osias, Joel Donato Ching Jacob, Victor Ocampo (check out the history of Filipino Science Fiction on his blog!), Ian Rosales Casocot, Anne Lagamayo, Christine V. Lao, Mia Tijam, Nicasio Andres Reed, Dean Alfar, and Gilda Cordero-Fernando are all Filipino authors whose stories I hope you’ll try.

***Never Have I Ever is published by Small Beer Press and is available TODAY!!!***

Mebuyen sighs. She was hoping the girl would not ask.

Spells and stories, urban legends and immigrant tales: the magic in Isabel Yap’s debut collection jumps right off the page, from the joy in her new novella, ‘A Spell for Foolish Hearts’ to the terrifying tension of the urban legend ‘Have You Heard the One About Anamaria Marquez’.

Isabel Yap writes fiction and poetry, works in the tech industry, and drinks tea. Born and raised in Manila, she has also lived in California and London. She holds a BS in Marketing from Santa Clara University, and an MBA from Harvard Business School. In 2013 she attended the Clarion Writers Workshop, and since 2016 has served as Secretary for the Clarion Foundation. Her work has appeared in venues including Tor.com, Lightspeed, Strange Horizons, and Year’s Best Weird Fiction. Her debut short story collection will be published by Small Beer Press in 2021. She is @visyap on Twitter and her website is https://isabelyap.com.