Today I am interviewing David Dalglish, author of the new fantasy novel, The Bladed Faith, first book in the Vagrant Gods series.

David Dalglish: Hello! I’m the somewhat prolific fantasy author of a bunch of different series, from the very D&D influenced the Half-Orcs and the Paladins, the assassin focused Shadowdance series, the anime inspired Seraphim Trilogy, and the overall bonkers Keepers Trilogy. I was there at the start of the self-publishing boom on Amazon, and also been traditionally published with Orbit Books for years now. With all this experience, you might think I know what I’m doing, but that’s still debatable.

DJ: What is The Bladed Faith about?

David: The island of a young prince, is invaded by the Everlorn Empire, a sprawling power on the mainland ruled by their God-Incarnate, who is determined to slaughter all other ‘heathen’ gods and establish himself as the sole idol of worship. With his family executed, his gods slain, and his army crushed, any resistance seems hopeless. But then a core group of resistance fighters from the mainland arrive, rescue Cyrus, and offer him a chance to fight back. Using his ties to the throne, and their money and experience, they can create a new resistance, spearheaded by Cyrus himself. He will be their figurehead, trained to fight, to kill. He’ll become an assassin known as the Vagrant, and through rumors and subterfuge become a new hope for the island so they might believe this overwhelming, unstoppable empire can still be beaten.

DJ: What is the world and setting of the Vagrant Gods series like?

David: The vast majority of the Vagrant Gods takes place on the island of Thanet. It’s a fairly small island, ruled over by two gods, the butterfly goddess Lycaena and the winged lion Endarius. Due to the cooperation of the gods, their earlier squabbles and fractured regions have united under a single royal family blessed by the gods themselves. Given their lengthy distance from the mainland continent of Gadir, the people of Thanet have mostly known peace…until that massive fleet arrives at their shores at the beginning of the novel. END_OF_DOCUMENT_TOKEN_TO_BE_REPLACED

Today I am interviewing David Dalglish, author of the new fantasy novel, Soulkeeper, first book in The Keepers series.

David Dalglish: I’m a dad to three wonderfully nerdy girls, I’ve been playing games of Dungeons and Dragons since middle school, I started self-publishing my fantasy novels thinking maybe a small audience out there would appreciate a return to orcs and elves, and am bewildered by how well everything has gone since.

DJ: What is Soulkeeper about?

David: It’s about the world known as the Cradle, where humanity has always viewed themselves as the precious children of the three sister deities. Only the Cradle didn’t always belong to them, and marked by a surge of black water across the landscape, a previously banished world of magic, dragons, and monsters returns to throw everything into chaos.

DJ: What were some of your influences Soulkeeper and the series?

David: The world itself is an amalgamation of my various interests over the years, plus tons of playing D&D. A lot of the series takes place in a single city, Londheim, and that place in particular was heavily inspired by the gothic masterpiece that is the city of Yharnam from the game, Bloodborne. END_OF_DOCUMENT_TOKEN_TO_BE_REPLACED

The Friday Face-Off: Renewed Shall be Blade that Was Broken

The Friday Face-Off: Shall be Blade that Was Broken

A Dance of Blades (Shadowdance #2) by David Dalglish 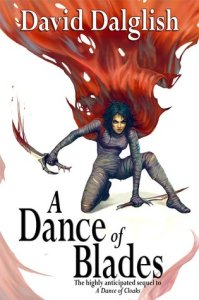