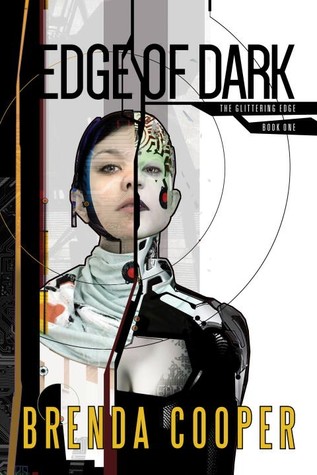 Edge of Dark (The Glittering Edge #1) by Brenda Cooper

One of my top books of the year!

What if a society banished its worst nightmare to the far edge of the solar system, destined to sip only dregs of light and struggle for the barest living.  And yet, that life thrived?  It grew and learned and became far more than you ever expected, and it wanted to return to the sun.  What if it didn’t share your moral compass in any way?

The Glittering Edge duology describes the clash of forces when an advanced society that has filled a solar system with flesh and blood life meets the near-AI’s that it banished long ago.  This is a story of love for the wild and natural life on a colony planet, complex adventure set in powerful space stations, and the desire to live completely whether you are made of flesh and bone or silicon and carbon fiber.

In Edge of Dark, meet ranger Charlie Windar and his adopted wild predator, and explore their home on a planet that has been raped and restored more than once.  Meet Nona Hall, child of power and privilege from the greatest station in the system, the Diamond Deep.  Meet Nona’s best friend, a young woman named Chrystal who awakens in a robotic body….

I’ll give to to you straight: I did not have the highest of hopes coming into this. The cover – while it is an impressive design – I do not think looks good. Never read Brenda Cooper before. I did read the synopsis, thought it sounded promising, but wasn’t about to go rush out and buy it. How did I come to read this book then? Well, I was lucky enough to win it in a giveaway. When I say lucky, I mean lucky. To think that if I hadn’t won this book, I never would have read it, and would have missed out on one of my top books of the year. I am so incredibly lucky.

Charlie is ranger who has lived on Lym his whole life. Nona was born and raised on space station; she has never left the Diamond Deep, but after her mother’s passing, she finally decided to honor her father’s dying wish and see the sky. Nona then goes down to Lym where she meets Charlies as her guide.

While Nona is visiting Lym, the Next – technologically advanced robots – begin to invade the Deep and take captive a space station. Once the station is in their control, they begin to force humans to convert to robots. On this space station is Nona’s best friend, Chrystal.

We will follow the journey of Chrystal, as she tries to adapt to becoming a soulbot. Charlie, as he does his best to protect Lym – his home that he loves more than anything – from the Next. And Nona, as she battles the political world dealing with the decision of how to handle the Next, and tries to determine wether or her best friend, Chrystal, is still alive.

What exactly the Next want, no one knows, and whether or not they mean harm, no one can tell…

I enjoyed Brenda’s prose very much. Her writing is precise, elegant, and the reading was very smooth. There is a lot of technology present in the story, yet never once did I have an issue understanding it or have to stop because the explanation was not clear. I did stop on many occasion to contemplation what was is was to be human – but I will get into that later.

From the beginning I could not put this book down. There wasn’t any laser battles, high drama scenes to start, or a gripping mystery – it was Charlie’s view of the landscape Lym, and it was a pleasure to read..

We start off meeting Charlie and Nona. Learning how much passion, care, and protection Charlie has for Lym, and seeing Nona – who has lived in the space-station for her whole life – exploring and seeing the world for the first time. She takes awe in little things and marvelous at the beauty in things as simple as seeing an open sky. It’s a kin to seeing a child exploring Disney for the first time. The mixture of Charlie’s native view and Nona’s curious view of Lym, and Charlie’s opinion of Nona being here for the time, and Nona’s view of Charlie has living here for the first – this contrasting and overlapping view points help to build a complete complete picture for the planet, and also, for out characters.

Charlie and Nona are not generic by any mean, ant I would not say they are completely original, but they are memorable. I did build up a quick connection to both of them and was fascinated in seeing how each of them viewed each other, and each other’s world. The world building and character development were truly what kept me going for the first half, while the foundation of the plot were being laid down.

The human’s relationship with soulbots and the Next are the main focus of the plot. I’m not going to explain in detail what each are, but essentially the Next are extremely technologically advanced robots that have had a human consciousness uploaded to it. A soulbot is the step before the Next. Soulbot is after a person’s consciousness has been uploaded into a robot body, but that robot body flawlessly identical to their human body. Eventually a soulbot can become a Next.

The third POV is from Chrystal – a friend of Nona. Chrystal was an interesting POV to have, because her and her family are humans to start and then become soulbots. Chrystal was not my favorite character – that was Charlie, but she was to my favorite read. Thought Chrystal, we are able to see how the family thinks as they humans, and then how they think as soulbots, and wether or not they still consider themselves as humans. Since Chrystal has a family of four, we are able to get a variety of different views which represent different opinions of how people may feel toward becoming a Next. It is a very eye opening and sympathetic experience seeing what Chrystal has to go through.

This trans-humanism is where the book shines and had me constantly asking myself and contemplating, “What does it mean to be human?” Is a human defined as our bodies and beating heart, or it just our ability to think and know of our self-awareness? If it is just consciousness, then if our memories were uploaded to a computer would we no still be human? However, where is our soul? Does the soul define a human? And is it attached to our body or mind?

A number of questions and issues arise from this, and how people perceive these soulbots and Next are the root of our conflict. Some people see the soulbots still as humans; some see them a robots. Some want to accept the Next and be friends; others want to destroy them and start a war. The Next are coming. Taking converts. They are searching for something, but won’t say what. They say they mean no harm, but can we trust them?

I myself was very firm where I stood on the matter about wether soulbots and Next were human or not – though it took me most of the novel to reach this conclusion. However, as soon a certain event happened at the end… I had no idea what to think anymore. Brenda did an excellent job on manipulating my own beliefs of the situation.

Even with how much I loved this book, I am not sure it will be for everyone. Personally, I think this type of technology is awesome! (Singularity is right around the corner!). Brenda does a superb job of explaining the technology, focusing the story around it, and making you bring your own ethical and moral beliefs into this. The drawback is the story is mainly focused around this technology. If you’re not into the soulbots and Next, you probably won’t be too hooked to the plot. The characters have a bit of developed around on how this this technology affects them too. Thus, not interested in the technology, may not be interested in the characters, as well.

But I still highly recommend this! I loved her writing. I loved how the story had me thinking and constantly evaluating my own beliefs. But most all of all, I loved how even once I closed the book, I was still contemplating where I stood on the issue!

Side Note: This book takes place is the same universe, but later on the same timeline as the Ruby’s Song duology. You do not need to have read that series for this book (I haven’t), but I really want to now!

12 thoughts on “Book Review: Edge of Dark (The Glittering Edge #1) by Brenda Cooper”