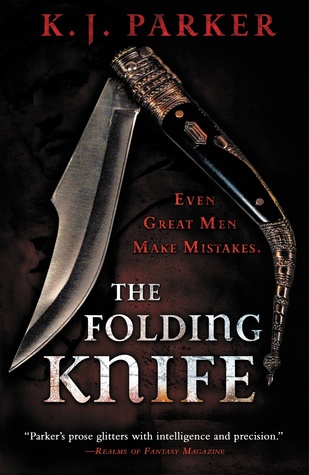 The Folding Knife by K.J. Parker

A heart-breaking, bitter-sweet story, that despite the potential boring sound of a banking and political focus, will keep you engaged, and biting your nails every page.

Basso the Magnificent. Basso the Great. Basso the Wise. The First Citizen of the Vesani Republic is an extraordinary man.

He is ruthless, cunning, and above all, lucky. He brings wealth, power and prestige to his people. But with power comes unwanted attention, and Basso must defend his nation and himself from threats foreign and domestic. In a lifetime of crucial decisions, he’s only ever made one mistake.

One mistake, though, can be enough.

I have no idea why, but I could not put this down. It is literally about a man – boy at the time – who starts working at bank, builds up a vast amount of money running the bank, becomes the First Citizen of a faux-Rome country, and then through political and economical manipulation, we see him rule his country. No sword fighting, no magic; it’s politics, banking, and economics, and I loved every page of it!

When Basso was a young man, his father used to be the First Citizen, but lost his re-election. After his loss, and down on money, his father decided to gamble and buy a bank. Best deal he ever made he he said. It is at this bank that Basso begins to work under Antigonus, and through him that he learns to become a master of banking.

At the time when Basso’s father was still suffering from financial difficulties after the election loss, and before the bank took off, in order to gain some money and keep reputation, he arranged a marriage for Basso to marry a girl named Cilia.

Basso was sweet, young, and optimistic about the situation – even apologizing for his lack of looks to Cilia – believing that one day they would grow to learn to love each other.

Running a bank takes up almost all of Basso’s time and after a while his wife begins to complain about this. So, one day he comes home early to surprise her and the twins, to take them away for little trip. When opens to door his bedroom, he finds his wife with another man, Palo, who is also his sister’s husband. It is here that Basso makes a decision, one decision, that will ruin the rest of life.

Actually, I lied; I know why I couldn’t put this book. It was because of one name, one character, one man: Basso. What a character K.J. Parker created. It’s one of these characters that will have you scratching your head with his decisions, and take you on emotional rollercoaster.

We start off seeing Basso protecting and caring for his sister, whom he loves more than anyone else; he is working in the bank not because he is father’s son, but because he wants to give it his best and be great; he knows that his marriage is forced, and him and Cilia don’t love each yet, but he wants to make it so one day they can both learn to love each other. You can’t help be hopeful and optimistic for him. You fall in love with his character at the start, and then that one day when he get homes early, trying to do something nice, everything falls apart, and he is never the same.

He doesn’t go off on a drinking bender, or run away to another country or any like that after. He stays running the bank, and eventually becomes First Citizen, and becomes more successful than your wildest dreams, but because of what happens that day, it creates something between him and his sister… and Basso is the never the same.

((For the record, I have no idea why Basso feels bad for what he did. I support him 100% with Palo – not Cilia – and he should no way feel guilty about what he did to his sister. He did nothing! His sister is CRAZY! I would have had her killed. But that just shows how much Basso loves her, I guess.))

From then on, I could only see how miserable Basso was with everything in life. He was having financial and political success greater than any other, but at the same time I could see him making mistake after mistake, and couldn’t help but wonder why on Earth he kept going on. Why was he making these deals, taking these risks, always pushing his luck – for what? He’s already at the top. Nowhere else to go! He was Basso the Magnificent, and the Great! So, what’s the reason? All I wanted was for Basso to be happy…

The bulk of the story is about banking economics and political scheming. You might be like me, and have ZERO interest them, so why should you pick this up? Because of Basso. All this political maneuvering and economical genius that Parker comes up with for Basso, is extremely impressive. Simply looking at the risks involved in the moves and deals that Basso makes are enough to make you worry for the Bank and Country, but when you bring in that sympathy you have for him, it take thats stress to a new level, and makes each of Basso’s deals, all the more important to you. Because with these banking deals, you never know how the will turn out – something always changes that can affect them, and there can be a great amount of luck involved – and they can take forever for the final outcome, every deal Basso does, starts to slowly add up through out the story, and eventually you’re just waiting for Jenga tower to collapse.

As magnificent as this book was, it is not for everyone. Despite how intrigued I was with Basso, it wasn’t uncommon for me to be uninterested in the details of banking and government, and just want to get to the TL;DR so I could know what the deal and why Basso made it. However, if you are willing to give this a shot, I’ll think it may be worth it. Basso is a great, magnificent – and every other nickname he has – sympathetic, and intriguing character, and the story is full complex political and baking moves, that fascinated me.

This was my first K.J. Parker novel. I don’t know how it matches up to the rest, but I do know that this won’t be my last.