Audio Book Review: We Are All Completely Fine by Daryl Gregory 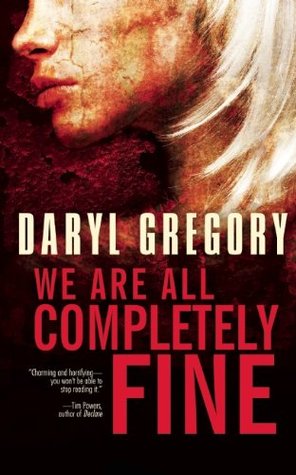 We Are All Completely Fine by Daryl Gregory

It gave me NIGHTMARES!

Harrison is the Monster Detective, a storybook hero. Now he’s in his mid-thirties and spends most of his time not sleeping.

Stan became a minor celebrity after being partially eaten by cannibals. Barbara is haunted by the messages carved upon her bones. Greta may or may not be a mass-murdering arsonist. And for some reason, Martin never takes off his sunglasses.

Unsurprisingly, no one believes their horrific tales until they are sought out by psychotherapist Dr. Jan Sayer. What happens when these likely-insane outcasts join a support group? Together they must discover which monsters they face are within and which are lurking in plain sight.

I saw a review for this a while back – forget where – but it started with, “I can’t believe I took me so long to read this!” Well, having had a copy of this audio book since November 2014: I can’t believe it took me this long to listen to it!!!

Psychotherapist Dr. Jan Sayer has created a new therapy-group, that she has hand selected. It contains: Harrison, a monster detective -now retired man – from a storybook, who claims his stories are based on true events. Stan, an elderly man in a wheel chair, is a cripple because he had limbs amputated… by a family of cannibals. Barbara, a middle-aged wife and mother, who once met the scrimshaw – who left her a message. Martin, a young college student, who has these black glasses, which he refuses to take off – no matter what. And Greta, a quiet young girl – mysterious – who never talks.

What is it about them that has brought all of them together? I will say that all these people are seriously f%#$ed up – wait until you see and hear their stories – but what it also has to do with, is what type of patients Dr. Jan Sayer is sometimes known to see; the ones who believe in the paranormal.

The most compelling aspects of this story are two thing: trying to figure out why these five people were choose for a group, and if these people a bat-sh!t crazy or telling the truth.

When I started to read this novella, the only genre I knew for certain it was was horror. I had also herd it was this mix of (dark)fantasy and supernatural, and a psychological horror – but I didn’t know why or what one it was primarily. Meaning: was it a psychological story where the people believed these supernatural things were real, or what is a story where these fantasy/supernatural things actually were real and were driving the people crazy? i.e. Are these people crazy of not!?

I could not tell! For the longest time I could not convince myself one way of the other. All of the patients are there because they suffered some type of traumatic incident that has left them scared in some form or another, but some of these stories… Some stories, like Stan’s, were believable – extremely disturbing – but still believable to me. Then as the others – Harrison, Barbara, Martin, and Gina – told their stories, they slowly started to become less and less believe, until they were downright telling what sounded like a dark fantasy story – no way that was possible. But(!) the thing is, the way the novella’s story unfolds, how traumatized the people are, and how passionately they tell their tale, there is just enough of what feels like “truth” there for me to think: maybe these people aren’t crazy; maybe Gregory isn’t trying to pull one on me. Then I’d think over what they just said, and it would be too outlandish for me to believe was true… Gregory has to be to trying to pull a fast on me? See what I’m getting at? That’a how I was the whole story; going back forth from believe and not believing!

Each of these patients’ individual stories are f$^#ed up, disturbing, creepy, scary, and may make your skin crawl. This is were the audio book may have had an advantage.

The narrator did an excellent job, and, for me, she brought those tales and whole story to life. I listened to this before I went to bed, and, honest to Zues-almighty, gave me nightmares! I don’t know about you, but when I start to get nervous or excited reading, my eyes can’t help but scan down the page or look to the right too see what will happen next. Listening to a horror story in audio though, I could only sit there, listen, and wait.

The only issue I hard with the narrator herself, was at the beginning – and actually for a bit of time: I had a hard time telling apart Martin’s and Harrison’s voice until one of their names was mentioned. Aside from that, nothing. The voices she uses captured each character perfectly.

I don’t know if this was because I used the audio book, but the repetition of “he/she said” was very obvious at times – and painfully so. Then there is also this issue of whose POV the chapter is in. Gregory at times will start the chapter off using “we”, but as the reader, we do not know who “we” is until another characters talks to “we”or “we” mentions who they are. In a book I could skim my eyes ahead to see – this it true – but I have heard this complaint for the non-audio version.

Did I mention that book also won the 2014 Shirley Jackson Award for Best Novella? I haven’t read the other novellas on the list, but I read this one, and it is indeed worthy of the honor. This a gripping and scary story, with one-of-kind f%@$ed up characters, with their own f%@$ed up stories, written by author who almost drove me crazy because I was trying to figure out if the is the patients were crazy or not.

11 thoughts on “Audio Book Review: We Are All Completely Fine by Daryl Gregory”