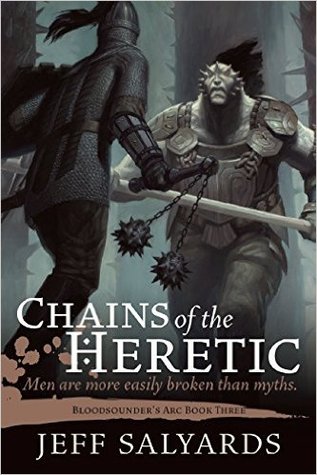 Chains of the Heretic (Bloodsounder’s Arc #3) by Jeff Salyards

An EPIC ending to an EPIC fantasy trilogy!

Emperor Cynead has usurped command of the Memoridons—Tower-controlled memory witches—and consolidated his reign over the Syldoonian Empire. After escaping the capital city of Sunwrack, Captain Braylar Killcoin and his Jackal company evade pursuit across Urglovia, tasked with reaching deposed emperor Thumarr and helping him recapture the throne. Braylar’s sister, Soffjian, rejoins the Jackals and reveals that Commander Darzaak promised her freedom if she agreed to aid them in breaking Cynead’s grip on the other Memoridons and ousting him.

Imperial forces attempt to intercept Braylar’s company before they can reach Thumarr. The Jackals fight through Cynead’s battalions but find themselves trapped along the Godveil. Outmaneuvered and outnumbered, Braylar gambles on some obscure passages that Arki has translated and uses his cursed flail, Bloodsounder, to part the Godveil, leading the Jackals to the other side. There, they encounter the ruins of human civilization, but they also learn that the Deserters who abandoned humanity a millennium ago and created the Veil in their wake are still very much alive. But are they gods? Demons? Monsters?

What Braylar, Soffjian, Arki, and the Jackals discover beyond the Godveil will shake an empire, reshape a map, and irrevocably alter the course of history.

*Disclaimer: I was provided with an early digital review copy from the author, in exchange for my honest opinion and review

To put it simply: this book was amazing. Scourge of the Betrayers (my review) was a solid, if short, first book in the trilogy, focusing on establishing who our characters were. Salyards then came back with the impressive Veil of the Deserters (my review): full of plots twists, exploring more of the magic and world, and telling us what the true mission of Captain Killcoin was. Finally, with Chains of the Heretics, Salyards has once again out done himself! This novel is leaps and bounds better than Veil! Everything from his writing to his storytelling to his characters, dialogs, and plot, have greatly improved; it’s hard to believe that an author could progress some much in one series, let alone make such a great jump from one book to the next.

Shit has just hit the fan like no one could have expected at the end of Veil of the Deserters. Arki, Braylar, Mulldoos, Vendurro, Glesswick, and few hundred more Slydoon warriors, now find themselves on the run the newly self-imposed emperor Cynead.

Having control of the all the Memordians gives Cynead an immense advantage over the Jackals as they are fleeing to reunite with the deposed emperor Thumarr. Cynead, however, is able to trap and force them to the East, where the only place they can head is to the Godveil. This leaves Captain Killcoin with two decisions: to try to stand and fight the Syldoon armies and Memorideans closing in on him – most likely resulting in all of his men’s death – or taking a chance on Arki and his translations, and seeing if Bloodsounder really can give him the ability to cross the Godveil to land of the Gods.

Why was this last book so great? Because Jeff Slayards kept adding and expanding and building upon what he had already written in the series. One area (no pun intended) that comes to mind when I think of the improvements that Salyards made was the location of the story. We have been traveling around in the previous two books -from Anjuria to the Green Sea, and from the Forest to Sunwrack – but this time we get to see the Land of the Deserters; we cross the Godveil! It was refreshing touch of scenery; literally felt like a whole new world and I was eating up everything that we were learning about it! And from this exploration into the lands of the Gods, Salyards give us the anwers – some, at least – of the Deserter religion: we learn the truth of what happened thousands of years ago, why the Gods built the veil, what power Bloodsounder and the Memordians hold, and who these Deserters are. Also, in this final book, Salyards even decided to give two characters, Azmorogon and Rudgi, a more prominent role, and it did not feel out of place or forced at all; it felt perfect – like it went with the natural flow of the story.

Things like these three aspects I have mentioned so far, give the final book a life of its own. Major events and twists have happened; the Syldoon empire has changed; Jackals have been killed and we have lost major characters. Our story needs to evolve; it needs to change. And because of that, we need to see more of the world; we need to learn of our burning questions; we need new characters to step-up, other characters to take a step a back, and some to adapt. We cannot have the same characters as before for the story to work.

I remember after I first read Scourge of the Deserters I thought that Ven reminded me a younger versions of Mulldoos, but loved to run his mouth. After I read Veil of the Deserters I thought that Mulldoos and Rike (from the Broken Empire trilogy) would have made such a great team because they were both blood thirsty. Between those two books, I had this image of Captain Braylar Killcoin as this cunning, tactical, and unforgiving man – which he is – but I had him as more of a ruthless, heartless/soulless, almost blood thirsty man. And Soffjian too, as basically the female copy of Braylar. All of these assumptions may have been somewhat right when I first made them – now that I look back at them though, they are all so wrong. They are all right on the bare surface, but these characters are no longer that; they are deep and complex, and incredibly developed to each being a character like their own within this series, and apart from other series too.

Ven runs his mouth, but he does it by bringing up random topics at the most inappropriate times – and he has a love for eggs! (Me too, Ven!) 😀 Mulldoos is as bloodthirsty, vulgar, and violent any anything, but dare I say, he has a heart? Despite the main protagonist of the this series being Arki, Braylar is just as complex and developed, if not more, than a number of other series’ main protagonists! What we saw of him in Scourge was only a taste of who Braylar really is, and here, in Chains of the Heretics, with Soffijian, their borther-sister relationship is explained in depth.

It is incredible how well Salyards ended up writing these characters – but none were written better than Arki. Do you remember when we first met Arki? This poor, scared, little boy, who had never left the library, never kissed a girl, would near cry himself when Braylar or Mulldoos would so much as look at him, and hadn’t a clue how to hold a crossbow; do you remember? Well, Salyards has been a plaguing sneaky and clever writer, and whether you have been picking up on it or not, he has been changing Arki. It has been ever so slight through out the series, with specific moments here and there as major turning points, but Arki is not the same at all. When I realized who Arki was at the end of the book, and compared him to the Arki I first met, my jaw hit ground. Even though both those Arkis are pretty much different characters, I cannot pin point an exact moment when he turned. Like I said, there some key moments that come to mind, but Salyards had been changing him ever so subtly, that when Arki finally did something so “not” Arki, that it didn’t feel out of character at all for me; it felt like Arki, and that’s when I realized how much his character has changed right under my nose.

In case you haven’t realized it, I will spell it out for you: I think Jeff Salyards in a phenomenal writer! I haven’t been listening to podcast much the past year as I had been before, so I may be out of the loop a little bit for what people are saying about him, but when I first heard of Jeff, all I heard about where his fight scenes. They are top notch, but as each book came out, he showed how talented he was in so many other areas. The two I want to point out are his characters (I believe that the developed and arc of Salyard’s characters throughout the entire Bloodsounder’s Arc trilogy perfectly exemplifies how Salyar’s talent as a writer has improved) and his dialog! (I haven’t mentioned in this review, but I do go into detail in my review of Veil of the Deserters).

One last thing I want to mention is the ending: I found the end of this story to be pretty emotional, quite a shock, I thought, but it was extremely satisfying, and I would not change a think about it. I really do hope we get another series in this world! I won’t say which characters I think it will be staring 😉 but I did catch several possibilities where the story could be continued.

My only complaint about this series is that the first book wasn’t as good as this one! That is not a knock on Scourge, it was good, but now that I know Jeff can tell a story and write his characters, dialogs, scenes, and plots like what I read in Chain of the Heretics – this is the calibre of writing I will be expecting from now, Jeff… no pressure 😛

Can’t wait for whatever Salyard’s next book will be!

5 thoughts on “Book Review: Chains of the Heretic (Bloodsounder’s Arc #3) by Jeff Salyards”