DJ: Hey Marie! Thanks for agreeing to do this interview!

Marie Brennan: I’ve been a professional novelist for a little over ten years, writing full-time for eight of those. It’s almost all fantasy, though a couple of things veer over toward science fiction or horror. Other than that, I’m a thorough-going RPG nerd, a black belt in karate, an amateur photographer . . . I keep busy in a variety of ways.

DJ: What is Cold-Forged Flame about?

Marie: You know how some stories lend themselves to an “elevator pitch,” a single-sentence summary of what they’re about?

This isn’t one of those stories.

Or rather, the elevator pitch makes it sound terrible. “A pessimistic amnesiac is sent on a quest she doesn’t understand across an uninhabited island!” The real story is about what’s going on inside that character’s head. She’s been magically bound to do as she’s told — or at least try to — and remembering nothing makes it more difficult for her to succeed at her task . . . but she’s also been warned that the more she remembers, the more she might lose. The tension between those two impulses, memory and ignorance, is the engine at the heart of the story.

DJ: What were some of your influences for Cold-Forged Flame?

The year is 2000. I’m working at an archaeological field school in a back corner of Nowhere, Wales. (We were literally a half-hour walk from the nearest telephone.) One of the other field school students is a woman named Alyc, and she decides we should pool her knowledge of a role-playing game called Changeling: The Dreaming with my knowledge of the system used for that and several related games to run an ad hoc Changeling campaign with some of our fellow students. I wound up using my character from that campaign in a live-action game Alyc co-ran when we were both in grad school several years later — played her for four years — and then eight years after that LARP ended, the core elements of that character swam back up to the top of my mind, and told me they had some life in them yet.

So in short, Cold-Forged Flame is not just influenced but directly inspired by that game Alyc ran on a dig sixteen years ago.

(Oh, and Alyc? Is Alyc Helms, now the author of The Dragons of Heaven and The Conclave of Shadows. Being a good GM doesn’t always make you a good writer — or vice versa — but in this case she’s both.)

DJ: Could you briefly tell us a little about your main characters? Do they have any cool quirks or habits, or any reason why readers with sympathize with them? (And for the record, before you even answer this question, solely from reading the synopsis, I am already in love whoever this “woman” is) 😀

Marie: It’s difficult to talk about the protagonist in detail without undercutting the story, because so much of it is driven by the slow unfolding of information as she herself recovers it. (She doesn’t even start out knowing her own name!) But I’ve always liked her sense of humor. It’s got a gallows edge to it, but it’s the one thing she can really hold onto when she has so little else.

DJ: What is the universe for Cold-Forged Flame like?

Marie: This first novella (it’s the start of a series) takes place in a very limited locale. The beginning and the end are set in a rural, coastal area that’s got a bit of a Celtic flavor to it, but the bulk of the story takes place in a much stranger place: an island that is clearly supernatural in nature, that appears in different places and disappears without warning, where the moon doesn’t follow the usual phases and the sun never rises. It changes for each person that encounters it, in ways that reflect certain things about that person.

DJ: What was your favorite part about writing Cold-Forged Flame?

Marie: Probably figuring out how the island should operate. I’ve been writing a very realistic series for several years now — the Memoirs of Lady Trent, which feature dragons, but otherwise are pretty much about doing science — so it was nice to get back to something much more fantastical, even mythic in tone.

DJ: What was the most difficult part?

Marie: Working with an amnesiac protagonist. It’s one of those tropes you have to think twice about before using, because it’s so overdone, and often so badly done. How can you have a vivid character when they start out as a blank slate? I knew I had a good reason for inflicting amnesia on my protagonist, but I had to constantly look at the story for ways to give her personality and motivation, while operating within a very constrained narrative space.

Marie: I hope they’ll be talking about the climax. I mean, that’s often the most memorable part of any story . . . but in this case it’s the moment where a whole bunch of pieces move into position and you find out about the layer that’s been underneath the rest of it this whole time. That scene is pretty much my reason for wanting to write this particular story out of the character’s life; I hope it will be equally powerful for my readers.

DJ: What was your goal when you began writing the Cold-Forged Flame? Is there a particular message or meaning you are hoping to get across to readers when they finish it?

Marie: I don’t usually think about messages or meanings when I’m writing. They’re in there, don’t get me wrong, because they’re in every story whether we plan to put them there or not — but if I think consciously about those things, I usually wind up preaching. My only real goal was to tell a compelling story about a rather unusual character.

DJ: This may have skipped some reader’s attentions, but Cold-Forged Flame is actually a novella. It seems to me that novella is gaining a rise is popularity again: what is it about the novella format that you like? Do you feel there is a particular advantage to telling your story that way over the novel?

Marie: Like many writers, I believe that every story has a natural length, a quantity of material and elaboration thereof that works best for the concept at hand. I’m delighted that the changes in publishing (with ebooks, print on demand, etc) have made novellas a viable form again, because there are stories that work best at that length; for them, a short story is too short and a novel is too long. I couldn’t possibly sustain this particular story for the duration of a novel, because the tension of the protagonist wanting to remember and fearing what will happen if she does would fall apart after a while. I would have to make this a part of something larger . . . but then the punch of the ending would be diluted, because it wouldn’t be the ending. So I’m glad that I can let this thing stand as a work on its own, connected to others, but a story in its own right.

DJ: When I read, I love to collect quotes – whether it be because they’re funny, foodie, or have a personal meaning to me. Do you have any favorite quotes from Cold-Forged Flame that you can share with us?

Marie: As you might expect, most of my favorites are too much of a spoiler! But there’s one moment where somebody asks the protagonist’s name, and she says, “I only give my name to people I trust.” Then, in her thoughts, she adds, And apparently I don’t trust myself. It’s ironic — and also true.

DJ: Now that Cold-Forged Flame is released, what is next for you?

Marie: I’ve got two things coming up in the spring — both on the same day! One is Lightning in the Blood, the sequel to Cold-Forged Flame, wherein my protagonist finally gets out into the larger world and encounters someone who knows something important about her past. The other is Within the Sanctuary of Wings, the fifth and final book of the Memoirs of Lady Trent.

DJ: Before we go, what is that one thing you’d like readers to know about Cold-Forged Flame that we haven’t talked about yet?

Marie: I listen to music a lot while I work, because it helps me get into the right headspace. For this novella, the main song — the thing I listened to while writing the island portion of the novella — was an orchestral piece called “…and the mountains rising nowhere” by composer Joseph Schwantner.

DJ: Thank you so much for taking time out of your day your day to answer my questions!

*** Cold-Forged Flame is published by Tor.com Publishing and is available TODAY!!! *** 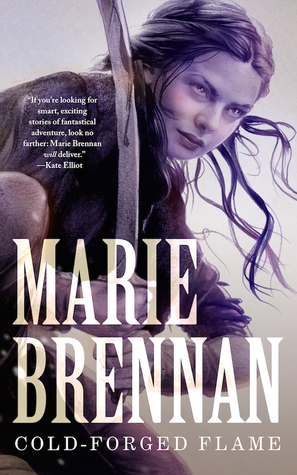 The sound of the horn pierces the apeiron, shattering the stillness of that realm. Its clarion call creates ripples, substance, something more. It is a summons, a command. There is will. There is need.
And so, in reply, there is a woman.

At the beginning—no—at the end—she appears, full of fury and bound by chains of prophecy.

Setting off on an unexplained quest from which she is compelled to complete, and facing unnatural challenges in a land that doesn’t seem to exist, she will discover the secrets of herself, or die trying. But along the way, the obstacles will grow to a seemingly insurmountable point, and the final choice will be the biggest sacrifice yet.

This is the story of a woman’s struggle against her very existence, an epic tale of the adventure and emotional upheaval on the way to face an ancient enigmatic foe. This could only spun from the imagination of Marie Brennan, award-winning author and beloved fantasist, beginning a new series about the consequences of war—and of fate.

Marie Brennan is an anthropologist and folklorist who shamelessly pillages her academic fields for material. She most recently misapplied her professors’ hard work to the Onyx Court historical fantasy series (Midnight Never Come, In Ashes Lie, A Star Shall Fall, and With Fate Conspire). She is also the author of the doppelanger duology of Warrior and Witch, the urban fantasy Lies and Prophecy, the upcoming adventure A Natural History of Dragons, and more than forty short stories.

When she’s not obsessing over historical details too minute for anybody but her to care about, she practices shorin-ryu karate and pretends to be other people in role-playing games (which sometimes find their way into her writing).