Author Interview and Giveaway: Rites of Azathith by Frank Cavallo

I have one (1) free copy (ebook or paperback) of Rites of Azathoth to go along with this interview! The link and details for the giveaway are located at the bottom of the post, following the interview

Today I am interviewing Frank Cavallo, author of the new dark fantasy novel, Rites of Azathoth.

DJ: Hey Frank! Thanks for agreeing to do this interview!

Frank Cavallo: Thanks for having me, I’m happy to be here. By way of introduction, I’m a writer of dark fantasy and horror. I’ve published four novels, a novella and a bunch of short stories over the last ten years or so. When I’m not writing I’m an attorney, focused on criminal defense work.

DJ: What is Rites of Azathoth about?

Frank: This is a bit of a genre-blending novel, as most of my stuff tends to be. It follows parallel stories of a burned-out FBI profiler who takes on a case investigating an escaped serial killer responsible for several occult murders. At the same time, a specialist in ancient languages is approached by an eccentric billionaire, and asked to translate a text that shouldn’t exist, which claims to unlock a path to summoning the Great Old Ones. That text has a connection to the rituals of the killer-at-large, bringing the two together.

DJ: What were some of your influences for Rites of Azathoth?

Frank: As the title suggests, this is heavily steeped in the Cthulhu Mythos of HP Lovecraft, dealing with his gods and his cosmology. There’s also a fair amount of hooks and chains and bloody mutilations, along with some explicit sex & death linkage, so I’m sure it’s not hard to figure out that I’m a big Clive Barker fan as well.

DJ: Are there any particular works of Lovecraft that are your favorite?

Frank: Without giving too much away, this book heavily references the Dunwich Horror, which is an all-time favorite of mine. In Rites of Azathoth I treat that story as if those events really did happen. They’re part of the history of this world.

Frank: Diana Mancuso is a former FBI field agent who is now mostly an instructor at Quantico. She grew up in an Irish Catholic neighborhood in Boston, and she’s still a little edgy. She’ll drop the gloves when she needs to. She also drinks a little too much and is having an affair with her married boss.

Carter Shaw is the other main character. He’s a gifted linguist and a life-long academic, incredibly smart but he’s never really amounted to much. He’s not a bad guy at heart, but at this point in his life he feels like a failure. That makes him a bit of an unpleasant guy to be around, and it also makes him prone to some questionable moral decisions.

DJ: What is the world and setting of Rites of Azathoth like?

Frank: It’s basically our world, if Lovecraft’s cosmos were real. So when I say it’s a genre-blending work, what I mean is that it’s essentially a police procedural story, set more or less in the “real world” which veers into supernatural territory based around the Cthulhu Mythos.

DJ: What was your favorite part about writing Rites of Azathoth?

Frank: It’s actually the part we haven’t talked much about yet, which is the killer himself, Luther Vayne. He’s a guy deeply enmeshed in the Mythos, more so than anyone realizes. Delving into his back story, his experiences with these forbidden rituals and his connections to the shadowy realm of the Old Ones, that was by far the most enjoyable part of this book for me. He’s the key to all the dark and sinister bits—and all the blood.

Frank: I’m a terrible person to ask, because I can never guess how people are going to react to anything I write. What I can tell you so far, from actual reactions, is this: every review seems to mention Diana Mancuso, so clearly her character appears to be the scene-stealer.

DJ: What was your goal when you began writing Rites of Azathoth? Is there a particular message or meaning you are hoping to get across when readers finish it? Or is there perhaps a certain theme to the story?

Frank: I’m really never trying to impart a particular message with my books. But I do try to explore a question or two, in a sense. Here, the characters are mostly dealing with notions of belief, working through what they can and can’t put their faith in, and why. Alongside that, there are issues of loyalty, which often arises out that conversation. What happens when you’ve lost your faith, or the thing you’ve put your trust in fails you? Those sorts of ideas.

DJ: When I read, I love to collect quotes – whether it be because they’re funny, foodie, or have a personal meaning to me. Do you have any favorite quotes from Rites of Azathoth that you can share with us?

Frank: This is a little awkward for me, because I feel a bit sheepish quoting my own work. What I will say is this, I do like to “borrow” well-worn quotes and use them in some fashion, which I did once in Rites of Azathoth.

This probably isn’t the most creative, or even clever, use of this particular line, but in this book I have a character say that famous Nietzsche phrase about staring too long into the abyss. The irony in this case is that my character means it more or less literally. There really is something staring back at him.

DJ: Now that Rites of Azathoth is released, what is next for you?

Frank: I’m generally the least superstitious person you’re going to meet, but the one irrational thing I hold to is that I don’t discuss works in progress. I’ve only broken that rule once and that project fell apart on me, so I’m staying mum. Stay tuned though, I’m always working on something.

DJ: Before we go, what is that one thing you’d like readers to know about Rites of Azathoth that we haven’t talked about yet?

Frank: As I mentioned earlier, I’m a criminal defense attorney in my non-writing life, so while I’m not an investigator myself, I deal with police every day, and FBI agents from time to time as well. Usually I’m trying to de-construct the results of their investigations, but that’s given me a bit of an insider’s perspective on the process, which I’ve tried to bring to this book. So I’m hoping Rites of Azathoth really immerses readers in the gritty moment-to-moment aspects of a police manhunt. I’m a big believer that you need to ground a fantasy story in a concrete reality, and that when you do it right, the supernatural stuff can really “pop” off the page. That’s the goal, anyway. Hopefully the readers see it that way. 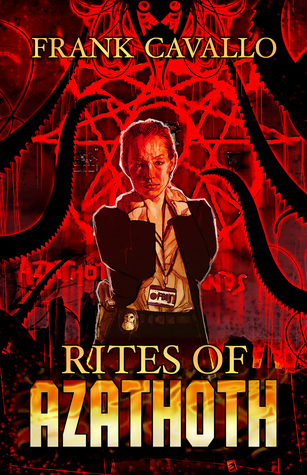