Today I am interviewing James Morrow, satirist, science fiction writer, and author of a recent fantasy novella, The Asylum of Dr. Caligari.

Over the course of a long career, Jim has published ten novels, four stand-alone novellas, and three short-story collections. He has won the World Fantasy Award (twice), the Nebula Award (twice), the Theodore Sturgeon Memorial Award, the Grand Prix de l’Imaginaire, and the Prix Utopia. His work has been translated into thirteen languages.

DJ: Hey Jim! Thanks for agreeing to do this interview! For readers who aren’t familiar with you, could you tell us a little about yourself?

JM: Within my circumscribed but loyal readership, I’m best known for my philosophical and irreverent Godhead Trilogy, comprising Towing Jehovah (a Nietzschean sea saga), Blameless in Abaddon (a modern-dress retelling of the Book of Job), and The Eternal Footman (a vision of a post-theistic world). All three books turn on the premise that God has died, leaving behind a two-mile-long corpse—a bald and arguably overbearing conceit, to be sure, but after living inside it for most of the nineties, I, for one, began to believe it.

Although I’m an atheist, I recently figured out that I don’t really write as an atheist—I write as a heretic, somebody who loves to play with grand theological and cosmological ideas. If it weren’t for God, I’d be out of a job. Most of my readers would describe themselves as nonreligious or even antireligious, but I’m always gratified when a churchgoer sends me a fan letter saying I sent his or her thoughts spinning off on unexpected directions.

DJ: What is The Asylum of Dr. Caligari about?

JM: Beyond all my scoffing at religion, much of my oeuvre critiques the popular notion that war is a good way for human beings to solve their problems. Back in 1986 I published This Is the Way the World Ends, mocking the Reagan Administration’s nuclear saber-rattling. The plot concerns “the unadmitted,” hypothetical humans whose lives were canceled when their would-be ancestors extinguished themselves in World War III. The unadmitted end up putting the perpetrators of Armageddon on trial, under the Nuremberg precedent, for crimes against the future.

Then came my stand-alone novella Shambling Towards Hiroshima, set in 1945 and keyed to the conceit that the U.S. Navy has developed biological weapon that strangely anticipates Godzilla. My hero, based on the horror-film actor Lon Chaney, Jr., must put on a lizard suit and demonstrate this horrendous biotechnology before a Japanese delegation.

In The Asylum of Dr. Caligari, I take potshots at war profiteering. Most of the action unfolds at the fictional Träumenchen Asylum during the early months of World War I. The title character, who happens to be a sorcerer, has created a jingoistic oil painting so hypnotic it can compel entire regiments to rush headlong into battle. The plot turns on the efforts of my hero, Francis Wyndham, an art therapist at Träumenchen, and his most gifted pupil, the supernaturally talented Ilona Wessels, to defeat Caligari’s wicked masterpiece with a Guernica-like painting of their own.

DJ: What were some influences on The Asylum of Dr. Caligari?

JM: Several prepublication reviews noted that the tone of my Caligari evokes old black-and-white horror movies, and that was certainly one of my goals. The spirit of Tod Browning’s Dracula (1931) and Edgar G. Ulmer’s The Black Cat (1934) hovers over my novella.

When constructing a subplot involving the mad Ilona Wessels, who invents abstract expressionism almost two generations before that movement actually emerged, I drew inspiration from Kurt Vonnegut’s marvelous Bluebeard, which concerns a painter of the Mark Rothko-Jackson Pollock school. Much of later Vonnegut is rather too misanthropic and nihilistic for my tastes, but Bluebeard is a nourishing romp, as affirming as it is acerbic.

But the biggest single influence on Asylum, of course, was the 1920 German Expressionist silent film, The Cabinet of Dr. Caligari.

DJ: What is that movie about, and when did you first see it?

JM: I’ve been fascinated by The Cabinet of Dr. Caligari (and its fabled set design) ever since I saw a provocative production still in my family’s Encyclopedia Britannica way back in the mid-fifties. I finally got to see Caligari in junior high school, when my friend George, who loved old horror movies as much as I, talked his father into driving us to a revival at the Wayne Avenue Playhouse in Philadelphia (we lived in the Philly suburbs).

The movie concerns a sideshow mountebank, Caligari (Werner Krauss), who uses his somnambulist, Cesare (Conrad Veidt), to commit murders. Evidently the screenwriters, Hans Janowitz and Carl Mayer, intended their film as an antiwar allegory. They’d both emerged from the catastrophe of 1914-1918 as lifelong pacifists, Janowitz having served as an officer, while Meyer feigned madness to avoid service.

For Janowitz and Mayer, Caligari symbolized the military and political authorities who sacrificed an entire generation to their unholy ambitions. Cesare the sleepwalker, meanwhile, represented the young men whom those same authorities transfixed with Kriegslust, love of war. In my novella, all of this is made very explicit, with Ilona’s graphically violent painting becoming a Friedensmaschine, a peace machine, countering Caligari’s war machine.

DJ: Could you briefly tell us a little about your main characters? Do they have any qualities and quirks that might incline readers to sympathize with them?

JM: Although he’s a war profiteer, and mentally unhinged, I don’t portray Caligari as a wholly irrational character. At one point he offers a sardonic critique of his colleague, Sigmund Freud, that I find amusing and perhaps even astute. Although I sympathize with some of Freud’s thinking, especially his sense of tragedy (a needed antidote to New Age salvationist malarkey), I love the debunking of depth psychology provided by the estimable Frederick Crews in Follies of the Wise.

In creating Ilona, the madwomen who resides at Träumenchen, I was determined to avoid making her a mere victim. The visual media have given us a standard and pernicious image of female insanity: the pathetic woman patient cowering in a white smock under the patronizing gaze of her keepers. I think immediately of Kate Beckinsale in Stonehearst Asylum (an otherwise worthy movie) and Eva Green in Penny Dreadful (though the series had certain virtues). Even Siân Brooke’s madwoman in Sherlock, Eurus Holmes, partakes of the stereotype (for all the feminist sophistication of Moffat and Gatiss). So I was delighted when I realized The Asylum of Dr. Caligari would let me deconstruct this malign cliché.

DJ: What was your favorite aspect of writing The Asylum of Dr. Caligari?

JM: Whenever I’m in the middle of a novel or short story, I convince myself I can draw creative energy from thematically related DVDs. My Caligari project gave me an excuse to screen all sorts of wonderfully ridiculous movies. The Glynis Johns thriller Cabinet of Caligari (1960) is pretty lame, despite a script by Robert Bloch, but in the context of my pseudo-research I found some things to admire about it (especially Dan O’Herlihy’s virtuoso performance). Then there was Roy Ward Baker’s entertaining Asylum (1972), Mark Robson’s oddball Bedlam (1946), and Stephen Sayadian’s soft-core and visually exuberant Dr. Caligari (1989), in which the psychiatrist is a woman. I also revisited Son of Frankenstein (1939), whose Expressionist castle interiors and urban exteriors explicitly evoke Robert Wiene’s original film.

DJ: What was your goal when you began writing The Asylum of Dr. Caligari? Is there a particular message or meaning you were hoping to get across?

JM: Right before my novella went to press, I found myself noodling with the back-cover copy. The last sentence reads, “But ultimately, The Asylum of Dr. Caligari emerges as a love letter to that mysterious, indispensable thing called art.” So beyond the pacifist arguments and the satire on war profiteering, that’s the thought I’d like the reader to take away.

DJ: When I read, I love to collect quotations—whether because they’re funny, foodie, or have a personal meaning for me. Do you have any favorite lines from The Asylum of Dr. Caligari you want to share with us?

JM: Early in the novel, speaking of the (fictional) principality where Träumenchen Asylum is located, the narrator remarks, “So successful were the treatments pioneered at this maison de sante—most famously the eponymous Caligari system—the people of Weizenstaat took to joking that their country’s principal import was irrationality and its principal export rehabilitated lunatics.”

I also like Caligari’s final rant (though it’s too long to be considered a collectible), in which the prescient sorcerer sardonically forecasts the ultimate fruits of 1914-1918: “a devastated France, a demoralized Britain, a ransacked Belgium, a ruined Germany, a receiving line of corpses stretching from Armentières to Zanzibar, the delivery of Russia into the hands of ideologically deluded fanatics, the ascent of mindless nationalism and virulent anti-Semitism following the fall of the Austro-Hungarian Empire, the creation of an artificially sectioned and perpetually chaotic Near East following the fall of the Ottoman Empire, and then, finally, planted in the soil of a distracted Europe and cultivated by professional psychopaths, the seeds of a second worldwide conflagration, destined to surpass the carnage quotient established by the first!”

DJ: Now that The Asylum of Dr. Caligari is released, what is next for you?

JM: I recently handed my agent the manuscript of my latest novel, Lazarus Is Waiting (working title). It dramatizes the seriocomic adventures of “the world’s second most famous resurrectee,” most especially his attempt to influence the outcome of the A.D. 325 Council of Nicaea (my Lazarus is a time traveler).

Want to find out more about James Morrow?

*** The Asylum of Dr. Caligari is published by Taychon Publishing and is available TODAY!!! *** 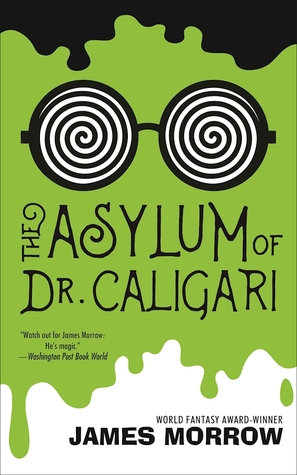 If you think today’s profiteers are diabolical, blink again.

It is the summer of 1914. As the world teeters on the brink of the Great War, a callow American painter, Francis Wyndham, arrives at a renowned European insane asylum, where he begins offering art therapy under the auspices of Alessandro Caligari―sinister psychiatrist, maniacal artist, alleged sorcerer. And determined to turn the impending cataclysm to his financial advantage, Dr. Caligari will―for a price―allow governments to parade their troops past his masterpiece: a painting so mesmerizing it can incite entire regiments to rush headlong into battle.

Born in 1947, James Morrow has been writing fiction ever since, as a seven-year-old living in the Philadelphia suburbs, he dictated “The Story of the Dog Family” to his mother, who dutifully typed it up and bound the pages with yarn. This three-page, six-chapter fantasy is still in the author’s private archives. Upon reaching adulthood, Morrow produced nine novels of speculative fiction, including the critically acclaimed Godhead Trilogy. He has won the World Fantasy Award (for Only Begotten Daughter and Towing Jehovah), the Nebula Award (for “Bible Stories for Adults, No. 17: The Deluge” and the novella City of Truth), and the Theodore Sturgeon Memorial Award (for the novella Shambling Towards Hiroshima). A full-time fiction writer, Morrow makes his home in State College, Pennsylvania, with his wife, his son, an enigmatic sheepdog, and a loopy beagle.