Today I am interviewing Adrian Tchaikovsky, author of the new fantasy novel, Spiderlight.

DJ: Hey Adrian! Thanks for agreeing to do this interview!

Adrian Tchaikovsky: I’m a British writer known for my fantasy series Shadows of the Apt, an epic fantasy about people with the powers of spiders and insects, and also for my (Clarke-shortlisted!) SF novel, Children of Time, about hyper-evolved sentient spiders. So you might see something of a theme there. J

DJ: What is Spiderlight about?

AT: Spiders. Well, partly spiders. Spiderlight kicks off looking like any other fantasy quest novel. There is a dark lord. There is a prophecy. There is a ragtag band of adventurers intent on using the latter to defeat the former. But things go south when the have to recruit a horrible hairy giant spider into the party to satisfy (their interpretation of) the more arcane strictures of the prophecy. The spider, ‘Nth’, is less than delighted with this state of affairs, as are most of the adventurers. Hilarity, and arachnophobia, ensues.

DJ: What were some of your influences for Spiderlight?

AT: Dungeons and Dragons, for a start. I’ve been a gamer since way back, and I’ve borrowed liberally from gaming tropes in order to set up the traditional fantasy world that Spiderlight then proceeds to dismantle. There’s some Tolkien in there, too. Tolkien hated spiders so much that they basically come in from outside his creation, more unnatural than orcs and balrogs, and so I thought someone should raise the banner for Mirkwood Rights.

AT: There are five humans and a spider at the heart of the book, and they all get their chance to shine. There’s magician Penthos, of vast power and absolutely no social awareness, somewhat pyromaniac but and trying to be good (without really understanding what that is) because of Dion, Priestess of the Light, who started the quest with the belief that she was doing the right thing, but has had to make compromise after compromise until she ends up travelling alongside Nth, former man-eating spider, who spends half the book horrified by not having a protective exoskeleton and having to walk on only two legs. Then we have Harathes, a paladin for whom religion is an excuse to persecute and get what he wants; (NAME) the archer, who spends most of the book fending him off, and Lief the rogue who is only on the quest because he’s on probation after selling knock-off holy relics.

AT: The world of Spiderlight is intentionally set up as a stock fantasy – there are lands of the dark and kingdoms of the light, and never the twain shall meet. The various inhuman soldiers of the dark lord are mustering for a great war and the few brave souls the free world can muster must unite against them etc. etc. Except nothing quite works as it does in the stories. We get to see harassed bureaucrats of the light, servants of the dark lord who have to make their evil quotas – normal people, forced into uncomfortable roles by the requirements of a world that insists it runs on quest logic despite all evidence to the contrary. And standing over all this like a colossus is the Light/Dark divide that dominates everything and keeps the wheels of war and quest turning.

DJ: Could you please tell us about The Church of Arms of Light? I read in one Goodread’s review: “Our protagonists decide to compromise their beliefs by allying themselves with spiders, creatures who are of the Dark, in the war against the Dark Lord.”

AT: This arises out of the concept of Alignment in D&D, especially the early editions. Some things are Light, some are Dark, and the right magic can allow you to know if someone is good or evil. And the philosophical implications of that are, frankly, horrifying. The Church of Armes is the great bastion of the Light, the main challenger to the succession of dark lords that have plagued the world. When we get to see the inner workings of the church, though, it’s neither a totalitarian monster nor a paragon of virtue. There are sects and factions constantly arguing over the interpretation of prophecy, and even the head of the church can’t sleep for worries about whether he’s doing the right thing.

DJ: I also heard that there is some type of transforming between human and spider? Does magic play a major role in the story? If so, what is your magic system like?

AT: The lead character, Nth, starts life as a giant spider, whom our human heroes must somehow transport through the lands of the Light so he can fulfill his role in the prophecy. To accomplish this, Penthos transforms him into something that is… not actually as human as intended, but human enough to wear a hat and shoes. Magic in the world comes in several flavours – Penthos wields the “power elemental”, which comes down to setting things on fire as often as humanly possible. Dion wields the Light, which is anathema to things of the dark, and the dark lord’s servants have their counterpart power – and which magic affects who becomes important at various junctures.

DJ: From the cover art (which is fantastic, by the way), and the talk of battles and the prophecy of defeating the Dark Lord Darvezian – I’m expecting there to some swordplay or fireball action!

AT: I love the cover. It’s everything I could possibly have wanted. Tyler Jacobson did a cracking job with it. And there is swordplay and fireballs aplenty. Fight scenes are an art in themselves. Violence, for good or ill, is one of the pillars of epic fantasy (and D&D), and I think a good fight scene provides a visceral thrill all its own. As for writing one, there’s a lot to be said to having a very clear idea of the spatial relationships, the techniques, the precise storyboarding of what is going on – and then putting that into words in a way that disguises all of that scaffolding as much as possible, so the reader gets all of that information without ever being sat down and walked through it. Being able to get right behind the eyes of the POV character is important too – a lot of the feel of a fight comes from the direct, limited experience of an individual caught in the middle.

DJ: What was your favorite part about writing Spiderlight?

AT: I really, really enjoyed the banter between the characters. Most epic fantasy is fairly serious, and characters have a certain dignity imposed upon them. Spiderlight, with its intent to subvert the tropes, is a much more light-hearted venture. There’s one section, after the transformed Nth has rather gone off on a rampage, where Dion and the others decide they need to set limits of his behavior and effectively reinvent the laws of robotics. And then there’s the bit where Lief decides that what the unhappy Nth really needs is to be introduced to recreational alcohol consumption.

AT: Hopefully how they’re going to go right out and buy all my other books. Realistically, I can hope that various of the characters become favourites (Penthos has got a lot of mentions in early reviews), and that the denouement leaves people with something to mull over.

DJ: What was your goal when you began writing the Spiderlight? Is there a particular message or meaning you are hoping to get across to readers when they finish it?

AT: I hope there’s a lot there to make people think, especially about things like genre conventions, moral judgments, prejudice and certainty – there’s a lot of unwarranted certainty in modern life, where people could stand to let in more doubt and self-examination.

DJ: When I read, I love to collect quotes – whether it be because they’re funny, foodie, or have a personal meaning to me. Do you have any favorite quotes from but Spiderlight that you can share with us?

AT: “When Dion considered the world, her chief question was, Is this of Light or Dark? Penthos’s main interest was usually, Is this flammable?”

DJ: Now that Spiderlight is released, what is next for you?

AT: I’m working on the last book of my series that began with The Tiger and the Wolf, but this has proved a particularly busy year with side-quests. The first volume of Shadows of the Apt short stories, Spoils of War is just out, and I have a third-share in a Cthulhu Mythos anthology coming out next month, The Private Life of Elder Things. I’m also tentatively working on the lore elements of a Shadows of the Apt role-playing game, which will be particularly satisfying if it comes off, as that world started off as a game setting many years ago.

DJ: Before we go, what is that one thing you’d like readers to know about Spiderlight that we haven’t talked about yet?

AT: I think that most of the things I want readers to know, they’ll have to find out for themselves by reading. Spiderlight is full of stuff I’m just bubbling over to talk about, but it’s most of it spoilers of one stripe or another. There’s a lot of depth hidden under the quest narrative trappings, loads of little vignettes and moments – the weird sect Dion clashes with, the ranger with his Dark-detecting amulet, the Ghantishmen, the dark lord himself, but it all has to stay between the pages

*** Spiderlight is published by Tor.com Publishing and is available TODAY!!! *** 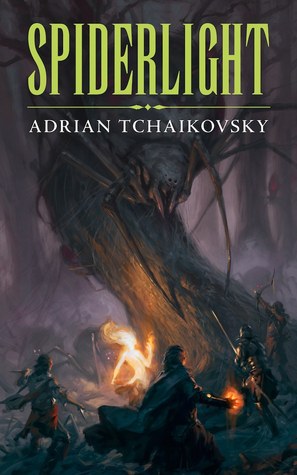 The Church of Armes of the Light has battled the forces of Darkness for as long as anyone can remember. The great prophecy has foretold that a band of misfits, led by a high priestess will defeat the Dark Lord Darvezian, armed with their wits, the blessing of the Light and an artifact stolen from the merciless Spider Queen.

Their journey will be long, hard and fraught with danger. Allies will become enemies; enemies will become allies. And the Dark Lord will be waiting, always waiting…

Spiderlight is an exhilarating fantasy quest from Adrian Tchaikovsky, the author of Guns at Dawn and the Shadows of the Apt series.
.
.

Adrian Tchaikovsky was born in Woodhall Spa, Lincolnshire before heading off to Reading to study psychology and zoology. For reasons unclear even to himself he subsequently ended up in law and has worked as a legal executive in both Reading and Leeds, where he now lives. Married, he is a keen live role-player and occasional amateur actor, has trained in stage-fighting, and keeps no exotic or dangerous pets of any kind, possibly excepting his son. Catch up with Adrian at http://www.shadowsoftheapt.com for further information about both himself and the insect-kinden, together with bonus material including short stories and artwork. Author Website: http://shadowsoftheapt.com/