DJ: Hi Roy! Thanks for agreeing to do this interview!

Roy Freirich: Thank you! I would love to say less is more and try to be enigmatic, but that probably wouldn’t be the result. I’m from suburban NY, was an absurdly pretentious self-pitying teenaged poet, studied real poetry in college and grad school and ran away to the mountains of California where I weaseled my way into writing song lyrics with/for Warner Brothers recording artist Bill LaBounty.  Moved to LA, became a lyricist with various songwriter contracts and songs recorded by some actual legendary R&B singers, but decided I needed a new wall to bang my head against and that since I saw lots of movies, I could write them. The jury’s out. One of my first efforts was written simultaneously as my first novel Winged Creatures and became the  (studio-retitled) film Fragments, featuring Forest Whitaker, Kate Beckinsale, Dakota Fanning, Josh Hutcherson, Guy Pearce, Walt Goggins, and lots of recognizable others to whom I am grateful. Since then, the movie business hasn’t been as straightforward for me, but it’s a safe bet I’ve failed to adapt as it became more driven by event (OK, superhero) fare and less by the kind of literary / psychological drama I write.

DJ: What is Deprivation about?

Roy: Elevator pitch?  Honestly, it feels like people have tried to pry the doors apart between floors, so here’s a short version: “A New England tourist island struck by mass insomnia.”  What’s it about thematically? The idea that dreams keep us sane, and without them, we’ll each go crazy in our unique way— as our own unresolved experiences increasingly drive us in our waking lives. It’s about mass hysteria, too, and how our individual psychology makes us vulnerable to it. And then, yes, about how we collectively blame and scapegoat and murder each other.  We are the creatures who kill us.

DJ: What were some of your influences for Deprivation?

Roy: Dr. Sam Carslon—a former Harvard psychiatrist who had a student/patient commit suicide on the phone with him. Sam’s now fleeing his guilt, working as the island’s urgent care physician treating sunburns and hangovers, sharing a shabby rented yacht in the marina with local coffee shop waitress Kathy. Weed, wine, a sinecure… until… (there’s always an “until”) a mute mysterious little Boy is found on the beach, clutching a handheld video game, and cases of insomnia begin to turn up at the clinic.

A teenage tourist, Cort, was supposed to babysit for this little Boy and give his sleep-deprived mother a break, but instead trysts with local surfer Tay in a boat shack and a haze of pot smoke, both competing on Twitter with their friends — who can stay awake the longest, Tweeting every fifteen minutes?

Meanwhile, hapless local Police Chief Mays tries and fails to keep order as the island spins put of control. Blurry and judgment-impaired from deprivation himself, he considers desperate measures to keep the epidemic from spreading to the mainland, where his daughter goes to college.

Dr. Sam’s summer lover, Kathy, comes to wonder about her choice.  Is Sam capable of any kind of genuine intimacy and longer-term relationship, or is he too damaged?

Roy: The book features italicized sections where we meet various ancillary characters once as they try to figure out why they can’t sleep. Some think it’s their mattress, the TV next door, insects, the coffee that wasn’t really decaf, their personal shame over an event.  This last would be sorority girl Carla Mott:

“Carla Mott doesn’t care what Kira or Beth thinks; no help for her headache, she went to bed early, fuck Happy Hour and those guys from SUNY sexting

and whining about it nonstop, too, how tired, how they just want to crash

house mixer she skipped for a change, so much as the parade of shames in

her nonstop guilt reel, rewinding and replaying, turning her one way and

then the other in her twin bed: the tuition her dad pays for her cut classes;

Hunter about and can’t use anyway now without her knowing; the loser she

didn’t quite sleep with (everything but) after all the Jager in his crappy, clove

cigarette-stinky car; the promise she made to Marco to go with to Italy and

maybe Istanbul instead of taking her work-study required soph semester

interning for that (sorry, but honestly kill-me-now terminally nerd) public

of episodes she cannot pause or fast forward or ever delete.”

DJ: What is the world and setting of Deprivation like?

Roy: The world is Carratuck Island, a place like Fire Island, NY — a beachy, summer tourist destination accessible by boat and ferry, inhabited by hardy locals who largely make their living catering to the summer tourist trade. Beneath the sublime beauty, there’s class resentment and the looming ephemeral nature of the place…

DJ: What was your favorite part about writing Deprivation?

Roy: Exploring how unresolved experiences drive us without us knowing it.

Roy: That thing too many of us take for granted, that we should be spending a third of our lives doing: sleeping.

DJ: Did you have a particular goal when you began writing Deprivation? Was there a particular message or meaning you are hoping to get across when readers finish it? Or is there perhaps a certain theme to the story?

Roy: I wanted to write the kind of book I like to read — prose informed by poetry, plot informed by the pace of a suspenseful screenplay. In terms of theme, I think my answers to question #2 cover this.

DJ: When I read, I love to collect quotes – whether it be because they’re funny, foodie, or have a personal meaning to me. Do you have any favorite quotes from Deprivation that you can share with us?

Roy: I feel remiss not having any foodie quotes, since cooking is a hobby. I do have a descriptive paragraph that’s a favorite scene.  Here the Doctor’s local summer love Kathy has led a crazed mob away from him, and now traverses the island in the darkness:

“To her left a few yards away, the shadows seem to gather into a sideways

of the island’s hundreds, at once quivering and still. Its round liquid eyes

glint with a distant light, a stray reflection of a star, or some human trace,

a far torch or beach fire. It lifts a hoof, sets it down, looks away and back,

chary and breathless, suspended. So silent a creature bearing its shape into

the world with barely the stirring of a blade of seagrass, or a mark on the

She remembers the rough press of her father’s cheek against hers, his

breath faintly rank from gin and cigarettes, his hair from sweat, as he held

her up to see a deer like this one. The air hung heavy and dank, flown by

fireflies as the creature regarded them, bobtail twitching. Out of the dusk,

others seemed to materialize, a shy bevy stepping forward slowly to stop

and step again, hopeful and wary.

“You can’t feed them.” Her father’s voice returns to her. “Or they become

DJ: Now that Deprivation is released, what is next for you?

Roy:  I see it as an anthology TV series and would love to find a home for it in that world. While I write the next novel.

DJ: Before we go, what is that one thing you’d like readers to know about Deprivation that we haven’t talked about yet?

Roy: Unreliable narrators — lots of what we see about the spread of the insomnia is through the eyes of sleep-deprived characters.  How trustworthy are their judgments, their choices?

RF: Always glad to pretend I know what I’m talking about!

***Deprivation is published by Meerkat Press and is available TODAY!!!*** 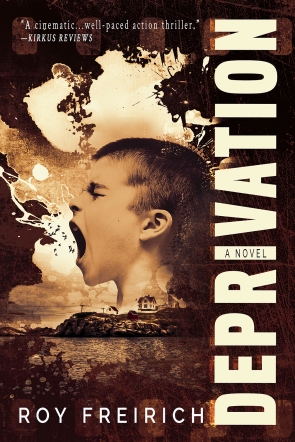 A gripping psychological thriller from the author of Winged Creatures. August, Carratuck Island, New York: a silent child is found abandoned on the beach clutching a handheld video game, and residents and tourists alike find themselves stricken by relentless insomnia. Denied the outlet of dreams—fears, guilt, and primal urges find other ways to surface. A teenage girl competes in an online game: who can stay awake longest? The bleary police chief struggles to keep order. The local doctor battles the ghosts of his past to find the cause and a cure for the epidemic, and face down the violent mob that blames the child. Cut off from the mainland, the island plunges into chaos, murder, and suicide.
.

Roy Freirich leads multiple lives as a writer. He adapted his novel Winged Creatures for the film Fragments, and has written screenplays for Fox Searchlight, Dreamworks, Warner Brothers, and Sony. His lyrics have been sung by legends Aretha Franklin, Smokey Robinson, and Patti Labelle, among many others. He lives with his wife, ever-patient editor and frequent cowriter, Debrah, in Malibu, California. Visit him online at http://www.royfreirich.com.