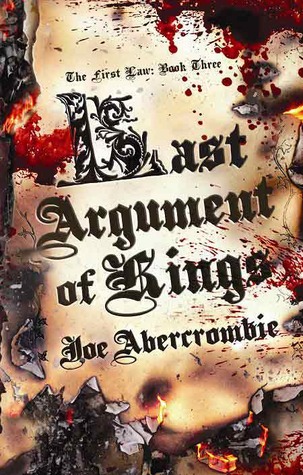 One of the FINEST character-driven fantasy series, I’ve ever read!

The end is coming.

Logen Ninefingers might only have one more fight in him–but it’s going to be a big one. Battle rages across the North, the king of the Northmen still stands firm, and there’s only one man who can stop him. His oldest friend, and his oldest enemy: it’s time for the Bloody-Nine to come home.

With too many masters and too little time, Superior Glokta is fighting a different kind of war. A secret struggle in which no one is safe, and no one can be trusted. As his days with a sword are far behind him, it’s fortunate that he’s deadly with his remaining weapons: blackmail, threats, and torture.

Jezal dan Luthar has decided that winning glory is too painful an undertaking and turned his back on soldiering for a simple life with the woman he loves. But love can be painful too–and glory has a nasty habit of creeping up on a man when he least expects it.

The king of the Union lies on his deathbed, the peasants revolt, and the nobles scramble to steal his crown. No one believes that the shadow of war is about to fall across the heart of the Union. Only the First of the Magi can save the world, but there are risks. There is no risk more terrible, than to break the First Law…

This last novel was amazing. Flat-out, absolutely amazing. Closing the book, I felt stunned. Speechless. I sat there and reflected on upon our characters. Where they started, and who they are today. Each one of their journeys and stories, in whole scope of things. I now understand why people regard this series so highly.

(See above for summary. Not going to waste time typing that. Have more important things to talk about. It takes off right where we left off anyways.)

This series, and this final novel in particular, left me with one quest: How do I define a character as good or bad? Is it that character’s actions, or is it their thoughts that define them? Is it how they see themselves or how they are perceived by their peers? If they do something evil with good intentions, are they still a good guy? Does one moment make up for a life of bad decision? Can one wrong choice really ruin a life? Is there no going back? No changing? No forgiveness? No redemption? In the end though, does it even matter?

The way that Joe wrote the characters in this story was unlike any other I have read. The way he able to change character POV and voice, giving us insight into their thoughts, their inner monologues, how they perceived themselves, other characters, and events around them. Whether I liked them, hated them, could relate to them or not; I felt like I knew each of them. I was able to connect to them on a deeper level and sympathize. That was what made this last novel, and then whole series, so great (On top of all the fighting scenes.)

Speaking of things that made Last Argument of Kings so great – I want to point out two chapters that stood out to me. The first was The Circle. This was a chapter I had been hoping would happen. The title should be pretty obvious what it is about. The second is Sacrifices. A lot does happen here, but there is pretty cool (at least I thought was cool) narrative technique that Joe does. I found it to really help connection switching between all the different events going on.

One of my favorite my moments from this novel had to do with Glotka, when he finally tell us the answer to his ultimate question in life: Why do I do this? The answer fell in so perfectly with everything. I stopped and laughed. It wasn’t necessarily funny, but it was – well, of course that was his reason.

The progression of this novel caught me very off guard. It was very intense beginning; lots of action, drama, fighting, and full of emotions. Then as we get towards the end, we built up to that giant, epicly massive, climatic fight at the end of all epic fantasies…! Except, it wasn’t really the end… there was still a hundred plus pages to go. I thought the story was done? The battle was finished, and the bad guys defeated. But oh no. Oh no no no. The most important part of the series was just starting.

Those last hundred-ish pages were amazing. They are the conclusion (the wrap-up section, if you will) where all the loose ends are tied together, and the characters each get their final goodbyes. But seeing how those plots connected, how each character’s story was influenced (or manipulated) over the series; remembering where they were when they started and what each of them ended up with, at the end; how it ended, and what we learned and now know of the truth — Those last hundred-ish pages are what made the series.

As I was reading this I kept asking myself why? Why did this to happen to West, Luthar, and Ardee? How come it was Glotka? What about Logen and Ferro, and other Northernmen? What’s the deal with Bayaz, Yolwei, and Quai? Then I asked myself: what was the point? This isn’t the way a story is supposed to end. But then it hit me. There was no point. There is no need for it to make a point.

This series was very realistic in sense that sometimes life sucks. Sometimes the good guys lose, and the bad guy wins. Sometimes shit happens, just because. No reason; that’s life.

I think Adree summed up things perfectly when she said,

“No on gets what they deserve”

I know I had my issues with the “lack of direction” of plot in the story, but that was me trying to force things. I acknowledged how the great characters where – their development, their arcs, and their plots – but I was looking for the reason of why they were doing everything. There really wasn’t one, and took me a while to figure it out, and then accept that the focus of this series, the plot of the story, was the characters.

I HIGHLY recommend this series.