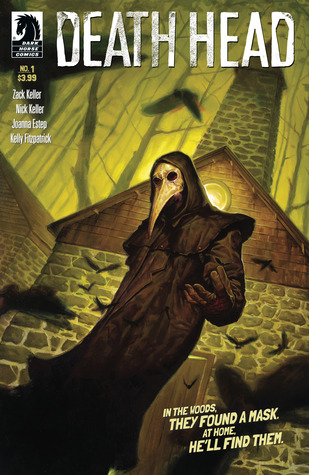 Reminiscent of a classic horror story!

Who is the Plague Doctor? What does he want? And how will the family survive?

When Niles and Justine Burton go camping to get a break from their stressful lives, they expect to find peace . . . not an abandoned village hiding an ancient evil. In a turn of events ripped straight from a horror movie, a brutal killer wearing a plague doctor’s mask begins hunting Niles, Justine, and their two kids.

What I love about older horror stories, is they didn’t rely on the gore to scare you (unlike so many gore-fest films today with the over-the-top torture and brutality scenes). Building up the mystery, developing characters, and throwing a little fright in here and there to keep you on your toes – but mainly it was the suspense of the plot, and being nervous of what would happen next, that would cause the girl’s head spinning around or the masked man with a machete walking into the cabin to scare me.

Married couple Niles and Justine are on a little getaway camping and exploring in the woods when they come upon an unmapped town in the middle of nowhere. At first, the couple believes it to be an abandoned reenactment town, even though it appears to have been kept in the good condition. Then when they find what is a real (not plastic) dagger sitting upon an altar in the church, it only adds to their doubts. Especially after Niles reaches down to pick up the doctor’s death mask, and then suddenly…

Maggie and her friends are skipping class in side room – smoking, drinking, joking around, Lena strip teasing – when one of the schools nuns walks in. Maggie is a student at an all nunnery school. She hate it there, doesn’t believe in God, and the only reason she attends is because it was the only school left that would accept her.

Bee is on his way to school when the local bullies start picking on him. They are standing in front of a sewer (large enough for a man to walk through standing up) when the head bully decides to empty Bee’s bag’s contents into the sewer and tell him to go fetch it, but to make sure that The Man in the Sewer doesn’t get him. Surely that’s just a myth though, right? Well, Bee will soon find out as he throw into the stream…

As you can tell, there is a lot going on. Three separate plots lines, three sets of characters, each with their own mystery, and I’m assuming all will be connected somehow. On paper a great formula, but what matters is how interesting each story is, how well the writer can split up each issue between multiple story lines, and wether or not it left me wanting to know how everything connects.

How did Death Head do?

When I first started to read this comic, I didn’t intend to read it right then. I was planning on skimming the first couple pages to see what it be like for later. I did skim, but then I went back to the beginning so I could read the whole thing through.

We start off with Niles and Justine (which appears to be the main story-line, for now) and immediately you’re drawn into the mystery of this town, and then, when Niles reaches for the mask…. we go to the Maggie cutting class. And as she reveales something very big to us… we cut to Bee. And as he is pushed into the drain… we go back to couple.

The comic is that cycle, twice, and ending with the couple a third time. What was most amazing is that in 32 pages with, 6 changes between 3 different story lines, not once didn’t anything feel rushed or skimmed over. The characters are develop very nicely to start, each story line had me hooked, the changes occurred at great cliff hangers, the overall story tells a lot and moves at a great pace, and while reading the issue I was constantly trying to figure out how everything is connected.

This has such a classic horror feel to it: couple getting lost in the woods and finds an abandoned town; rebellious girl with a trouble making best friend in a religious school; young boy with the town bully teasing him about the local boogeyman story. Each story line is based on those common story lines, but they in no way feel like the story you’ve read before. I think it because all three of them are happening at once, and because of what actually happens later on in the issue.

While this is based of the classic horror of building up the suspense, it still has current horror feel to it too like we are going to see some gore!

This was a SOLID debut issue. I wouldn’t say anything scary happens, but there are many a nervous moments, the multiple plot lines did an excellent job of building up the suspense for moments to scare me later, and I hooked on try to figure out how all this is connected.

While the cover arts is different from the interior – and I do prefer that art style more – the interior fits very well adding a nice creepy vibe to things.